Blogs I have known (Briefly)

I am woefully, embarrassingly new to the blogging world, and my pokings and proddings in that area have been fun and refreshing.  I'm doing this post in part to show off some new graphics, and in part to put some page distance between the male odor jokes and my next big post.

I've added a list of my favorite blogs on the sidebar.  I'm not sure how blogspot goes about listing them in the design features- it's not alphabetical, and not in the order I follow them, so I'll tell you about some of them.  Some you are familiar with, some you've never heard of.  All are worth a look.

The blog I have followed the most and longest is Steve Fraley and John Karakashian at Baldwin Bait and Tackle.  Technically not a blog, but a fishing report, they've been doing for years what I wish all the shops and guides would do- well-written, frequent, informative posting on actual conditions with lots of fish pictures and great scenery.  Karakashian's tying video's were basically my tutorial.  A couple of years back Steve started adding fishing videos, and I have to tell you- they made me quit watching outdoor Television.  They are exactly what I want to see.  His videos from Alaska last year were riveting and even alarming.  My words can't express how much I like watching these, so you'll have to check them out yourself.

To show you how little I've poked around the blogosphere, the blog I've followed second most is April Vokey's over at Flygal, and that for only about a year.  A lot of her posts are trip updates, but every now and then she comes out with a real gem, and what's not to love?  Lovely gal and awesome pictures of wild steelhead in their native waters set against that BC backdrop? Yeah, you're following it too.

After that come my recent discoveries.  Kirk Werner at  Unaccomplished Angler- probably my favorite. Unaccomplished Angler? Maybe, but definitely an accomplished blogger. Great writing, cool graphics, and his understated sense of humor keep me coming back.  His "Fly Fishing Needs Dirty Harry" post is perhaps the funniest thing I've ever read.

Most Things Custom is done by an old friend of mine, and it's worth a look.  Coyote Luke is a die-hard do-it-yourselfer who has recently discovered fly fishing and tying for steelhead and is killing me with all the fish he's catching this winter.  He makes beautiful custom musical instruments and writes about his various innovations.

Jay over at The Naturalist's Angle seems like the kind of normal person you could just go fishing with and have a great time- no drama, no pretenses, just a couple of guys fishing.

I think Owl Jones gets the nod for funniest and craziest; if you're not following his stuff you should be, but then again, you probably already are.

Everyone knows or follows Troutrageous, and for good reason- he gets the nod in the All-Around Entertainment department.  Skillfully done, and always interesting.

I really like the writing over at Fishing for Words.  A lot of his posts are about rod building, but when he waxes on it's always enjoyable.

Someone had to be mentioned last, and I've been enjoying Cofisher over at Wind Knots and Tangled Lines.  I think it's the attitude.  He's like that old guy who was grumpy with you but took you fishing and showed you a lot of stuff.  I've had a couple of those in my life, gone now, and reading his work and comments brings that back to mind.

There's a lot of great blogs out there I'm not mentioning- Eat More Brook Trout comes to mind, or how about this one- TFM?  If I have to spell that one out you've been hiding under the same rock as me.  There's plenty of others that I've checked out and love (The River Damsel etc.), you'll all eventually make it on the list, but I had to start somewhere, and now I have to go to work. 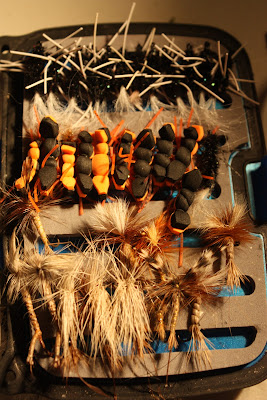 Posted by Fontinalis Rising at 4:41 AM