Skunked!- or The Most Effective Fly You're Not Fishing


I might just as well throw up a quick how-to what-to.  This fly, hands down turned and caught more fish than any other for me last summer.  Introduced to me by a good friend a couple of years ago, it's an easy tie and makes for some fun summer fishing.  While it catches a lot of small brookies and rainbows, on some days the browns won't leave it alone, and on an overcast day I've turned some browns that would have made my season.  The next skill I'll learn is hook-setting.

I've been tying them on #10 Mustad Salmon Fly hooks, which is absolutely the wrong hook, I'm looking for another, but I do like the up eye.  I need a thinner, sharper hook for trout, but it will have to do for this post.
I like using 100 denier black GSP, as it is very strong and lets me reef down on it w/o breaking.  I anchor my thread, then working from the head back wrap in two sets of round white rubber legs as pictured. 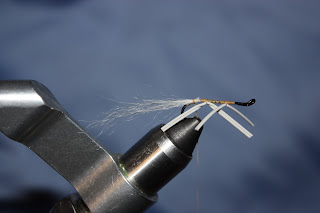 Tie in a bit of white kip tail then tie in some medium black antron or bugger chenille.  I like the extra flash of the bugger chenille, but either will do.  Palmer the chenille forward, wrap it in, give it a whip finish, position the legs so they look nice and criss-crossy, and voila- you'll turn more fish with this than anything else in your box.


I typically fish this across and downstream, with short little strips  to give the legs some twitch and wiggle. Sometimes, if I've turned fish that don't commit on the strip, I'll dead drift it back through the same run or hole- this often triggers the biggest fish.  If you're already familiar with this fly, then you know what I mean, If you're not- it's an Au Sable river classic that still catches lots of fish.

Posted by Fontinalis Rising at 4:09 PM