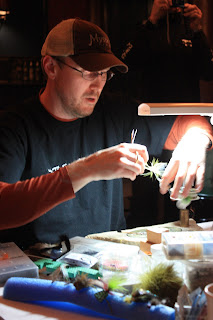 Greta was very angry this week, but it must not have been with me.  I went to my second local TU event held in their secret dungeon (City Park Grill).  She only checked to see if the scarifications were healing on me and let me walk right in.  Then I saw what had distracted her.  They had this poor sap chained to the table, forced to tie flies at mace-point, while the members in their dark robes and slippers interrogated him.  He was forced to answer questions such as "Do Steelhead like those?"  and "Why is the head on that popper square?"  He even got accused (rashly I thought) of using more flash in one night than certain members use in an entire year (we won't say any names, but his initials are John Sheets).
In case you're wondering his name ("HE HAS A NAME!!") was Matt Zudweg, allegedly a guide with Feenstra Guide Service.  The High Council will appoint a barrister to defend his honor on that count. 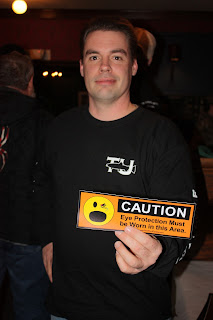 Matt put on a very entertaining presentation despite the cold sweat and constant questioning.  His flies are simple yet well tied; I suspect they may even catch fish.  Remember, folks- all suspects are presumed innocent until proclaimed guilty by the High Council.  Matt is also a graphic artist.  Not too graphic, just graphic enough.  He had with him a selection of stickers of his design including the one at right that should save me a lot of money on boat insurance.  Discovery in this case can be viewed at his website boneyardflygear.com. I wouldn't buy anything there if I were you, Greta may find you in contempt and it will be you chained to the table, and you're not as good a tyer as Matt. 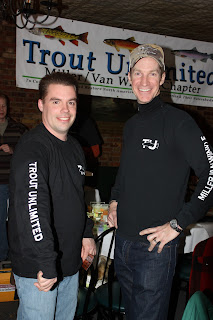 Lastly I want to state: I WON! I WON I WON I WON!!.  Take that Unaccomplished Angler, take that OBN, Take that Montana Fly Company! It was my turn finally, to win something.   I won the drawing for the TU Chief Interrogators shirt- I mean, what were the odds that out of the 12 people there I would win?  I can sense it now, things are really starting to turn around for Fontinalis Rising, things are looking up, a new start.  Zis time eet vill be me asking ze qvestions.

Tonights meeting with Mr. Zudweg does lead to some interesting questions, such as- "Could there be a line of swag in the future of Fontinalis Rising?"

Only with Greta's permission.
Posted by Fontinalis Rising at 8:21 PM