This is just to share some pictures of my first TU event ever, the  Miller Van Winkle chapter Tie One On event in Petoskey Michigan.  I enjoyed it alot; being my first TU event, I was a little nervous, what with all the secret initiation rituals and all, but my hair is starting to grow back and the red marks are fading.
As I said, I was a little nervous, so I just set up my vise and started tying after meeting the other guys.  I am in no way in the same league as these other tyers.  My philosophy is to tie only for what I actually fish, and buy only for what I tie, otherwise I would already have $2000.00 worth of Whiting capes and saddles.  Despite my weakness for feathers, I don't fish a lot of dries- I work outdoors in summer, and am busiest during the major hatch periods.  Most of my fly fishing consists of spring steelhead, streamer fishing, and summer time terrestrials.  So I tie egg and other steelhead patterns, a variety of streamers (my zoo cougar is pretty good, at least the trout think so), skunks and other assorted junk including some very effective soft hackles.

Did I tell you I'm not in the same league as these guys?  Here's a shot of John Sheets (sp?)- notice the intense concentration 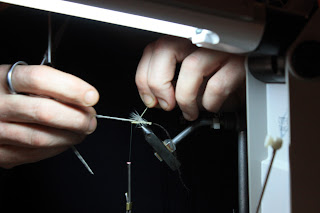 John was tying an extended body callibaetis, or so he says, I had to use the eXtreme Stop Motion on my camera just to get these fleeting images.  Ah, the wild fly tyer in his natural element.  There was some talk about a post, some hackle whirled in circles and then he handed me a fly which he said was a reject.  So I stole it.

Also there was Kevin Foerster of Lovells Fly Tyer fame.  He was tying up some Au Sable Skunks, which I should have been paying attention to as I fish this pattern a lot, and his was different from mine.  It was well tied.

All in all it was good low key fun, I learned nothing as I refused to set down my bobbin and watch, and Greta, the keeper of the Armory says I can come back when I learn not to cry out in pain.