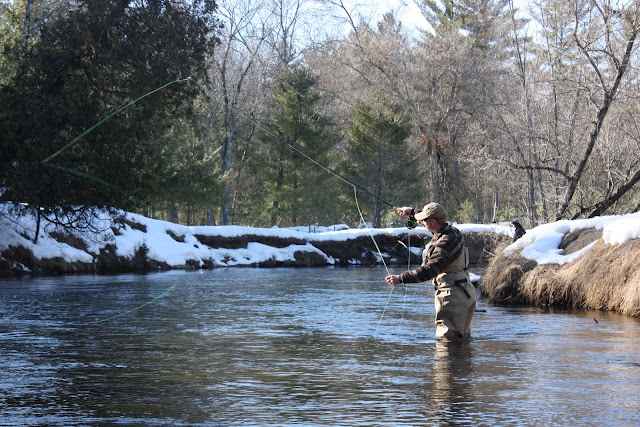 It's happened.  It's here, and you didn't listen and now you're going to be sorry.  March snuck up on you.  What? You think that snow and cold out there means anything?  Do you really think you have time to fart around anymore?  March is here, and it means business.  That's right, If you were napping in February, March was there filling your hand full of shaving cream, and it has a feather.

Maybe it's just me.  Maybe I'm the only one who notices that the days are longer, the sun a little warmer.  Wait, no, it's not just me, it's also the steelhead.  Oh yeah, and the Black Winter Stones, those things that look like pepper on the snow banks.  So excuse my chiding tone- you deserve it if you let March sneak up and gank you- totally your fault, I tried to warn you.

The problem with March is that- at least here in Trout Country, it tends to look and act a lot like winter at first.  The snow is still deep and statistically speaking it is the second snowiest month in Northern Michigan after December.  That all changes- rapidly.  The steelhead, knowing their time is close, move instream from the lakes and start to relate to gravel spawning areas, and some will actually begin to spawn.  Yes April is the main month for that, but if you're not fishing March you are missing some of the best steelhead fishing of the year.  Warm sunlit afternoons in early March always seem to trigger a feed, and the inevitable run-off towards the end of March gets fish up and moving; active fish means more hook-ups.  Yes I've had some dud times,  you will have to work a little for those fish, but for me it tends to be a very consistent month.  And why do I like March steelheading so much?  That's right, because most of you aren't out there.  I can go fish popular  rivers and accesses, fish some nice water, catch gorgeous eager fish, and still not bump into more than a couple of guys.


I'm out in March every day that I'm not working or up to my neck in other stuff, like making maple syrup.  MMMM....Maple.  You want some don't you.
There are other seasons in March.  If the Bay froze solid enough, the whitefish bite picks up.  One of the greatest joys I know is the aforementioned maple syrup season, a ten-year ritual that is coming to a close now that Terrance is selling his equipment.

I'll miss that, and the five gallons of syrup that was my take most years- it was essential to my smoked fish recipes; now what will I do? The perch fishing through the ice picks up dramatically in March and should be sampled at least once.  In Michigan, the bunny season is still open, but I have a hard time thinking about hunting this time of year, any thoughts of gun or bow having been crowded out by one chrome, pink cheeked lovely goddess- madame steel.  I love you.  There, that felt good to say.

So my advice to you is- get your crap together and get on it.  Those fish are there, and you just need to do the leg work.  It's time, the fishing season is going to be crazy from now until December.  I hope you made the most of your brief down time through winter.  If you didn't, you'll never catch up now.  And if you're not a steelheader- you have my pity.

Speaking of steelhead- look for tomorrow's post- I'm giving away 2 dozen hand tied (by me) steelhead egg patterns, details in the post.  See you then.

Posted by Fontinalis Rising at 3:57 AM