﻿
﻿ Yes Andy is a good friend.  Yes, he's a family friend.  Yes he has a product to sell, a very good one.  One I own and it's my favorite piece of tying equipment.  I take it with me to all of the tying seminars and clinics I attend, not to hawk it, but because I never want to be without it.  It's my granite tying base from his company, The Granite Fly.  Take a look.


It's gorgeous isn't it?  Wish you had one don't you?  That was the only blue one he had, so there.  Here's the thing- the base that came with your vise is either ugly as sin, or tipsy as all get out and probably both.  These bases are nice and wide and HEAVY- mine never tips, never budges.  It takes my reefing on streamers with 200 denier GSP, spinning deer hair, whatever it is you are fighting your base with right now.  They're compatible with most of the vises on the market, including the Renzetti Traveler, and my Peak vise.  They have little rubber bumpers on the bottom that keep them from shifting- the result?  A rock solid (no pun intended) set-up that is gorgeous to look at.  I love it for the aesthetic value alone.

"But Jason" you say, "I have one of those nifty, shifty clamps."  Really?  You want to tie on one of those ugly ungainly things for the rest of your life?  You are the tyer, your gear needs to work for you.  Why would you want to have to shift yourself around to be in the right position to tie?  Add to this that the surface of a granite base is virtually impossible to mar and that glue of all types and epoxies scrape right off with a razor blade without scratching it up?  Try that with an enameled steel base.  Let me know how that works for ya.

Back to Andy- I truly believe that he is one of the great innovators in the world of fly fishing.  Not that he has brought all kinds of great products to the market that you now use.  No, Andy is one of those tinkerers who can't leave a product or piece of gear alone.  If there is anything- anything at all, that bothers him about something, or that he can improve for his own use, he will work and work at it until he has modified it to his satisfaction, and trust me, that piece of gear is always better when he's done.  Gear manufacturers take notice- you need to be sending your gear to him before you ever bring it to market.  If there is any kind of bug whatsoever, Andy is going to find it, and rather than just complain, he's going to fix it.  I can't think of a single thing he owns that hasn't been given this treatment.  His drift boat, his waders, his tools, everything.
Here's another reason manufacturers should be sending gear to Andy to test.  Andy is truly a hardcore fisherman.  I know I've said some things elsewhere here about the notion of hardcore.  I also know, that this being my blog I sometimes make it sound like I'm Mr. Fisherman.  Andy is the next level plus several levels up, and one of the few truly hardcore anglers I've ever met.  He's a fly fishing purist, a great tyer, an avid steelheader, and a spey caster.  All I probably had to say was "spey caster".  They're all a little touched.  I learn volumes of stuff every time we fish just by watching him.  Andy has spent so much time on the water that it kills me that every time I fish with him, someone, usually a guide, walks up or pulls his boat up and starts talking and then it dawns on me that they know him and have for years. 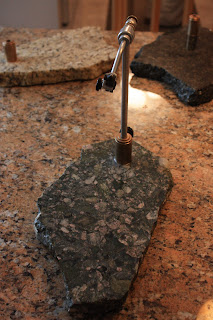 Here's a few more pictures of his bases.  He has them in a lot of different colors and types of stone.  Each base is "broken" instead of cut square or oval- what this means is each base is as unique as a thumb print.  He has pictures of each base up in the gallery sections on his website.  I was really torn between my blue one (the only one) and some that are an awesome green river rock.  What a tough choice.  Andy also has a video up that demonstrates the features of the base, so check it out. 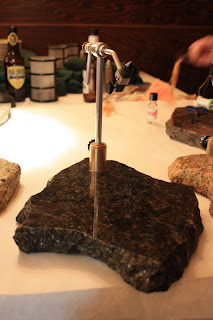 Andy has managed to get these bases in the hands of some top notch tyers and guides, people like Matt Zudweg and Tommy Lynch.  I've been to seminars they've put on, and guess what, they showed up with their granite base they got from Andy, and then proceeded to tell the crowd why this was the greatest thing since sliced peanut butter.

So here's what I'm going to do- GIVE ONE AWAY! in this weeks drawing.  My instructions are very specific, so pay attention.  In the text here and under the sidebar to the right titled Friends of Fontinalis Rising, there is a link to his site, The Granite Fly.  Go to his website, view the photo galleries- (photo gallery I, photo gallery II photo gallery III) and  look at his bases- you'll see that each base, being unique, is individually numbered.  Pick out your favorite, then come back to this post and  leave a comment.  You must enter the words "base number" and the valid number of the base you've picked.  If you win the contest you can change your mind and select any base from his site, but you must enter a valid base number to enter.  I'm going to let this contest run for awhile, so it will conclude on Sunday March 20, 2011 at 7 pm.  Again, the drawing will be by staff member Lorin the Drawing Girl.  She's highly trained in fairness and her mother will be watching.

Note: I love Andy's bases and think everyone should have one.  If you would like to buy one please do- if you have any trouble whatsoever then contact me at fontinalisrising@gmail.com and I'll see to it that you get one.
Posted by Fontinalis Rising at 2:44 AM