The Ravens I Know 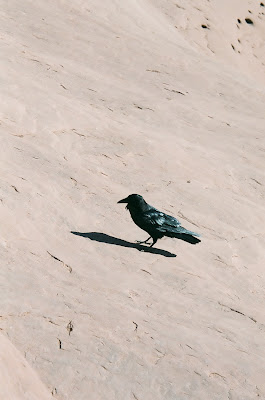 I don't bow hunt for meat anymore.  I don't hunt for antlers. I don't hunt for the solitude.  I hunt for the ravens.  I sit there in my tree, alone, shivering, waiting, knowing they'll come, the creeping daylight revealing the snow salted leaves, the grayness fading between gray trunks, the snow stark against the crisp cut edges of the leaves.  They swoop in, fleeting black shadows, speaking in low clicks and hoarse croaks.  I wonder where they spent the night, in the top of some tree, high on a  ridge, muttering to themselves against the cold and dark.

Only the raven knows this, his blackness cloaks his roosting.  I wonder about his morning meal- I'm certain he knew right where it was when the gray light lifted and he first shook out his shaggy feathers.

Ravens are my constant hunting companions; I am continually within earshot of their coarse banter as they swiftly wing overhead to some distant feast.  They frequently loiter , constantly calling and I wonder- are they talking to themselves?  Are they telling all the forest my position?  I doubt this, for above all creatures, the raven knows why I am here.  His croaks are celebratory, keen in anticipation of a warm gut pile, the cast off parts of an unwary doe.  Ravens do not see struggle or disease or death, only opportunity.  Fall for them is the fat time, three square a day, then back to their idle wheeling and groaning, their incessant jabber, their mocking and teasing.

I identify with Ravens- their intelligence, the way they banter and joust.  They are gregarious, but never found in large mobs like crows. They are busy, without ever seeming to accomplish anything.   They have one of the largest vocabularies for birds; they can even be taught to talk.  They live long.  They may be the last thing that all forest creatures ever see, yet no one knows where ravens go when they die.

Ravens are always a surprising bird.  They have one of the greatest ranges of body size in the bird world- I have seen them as big as eagles but shaggier.  They can trick you- I have found myself laughing out loud in the forest as they pass overhead, seeming to make up new sounds with which to entertain themselves. 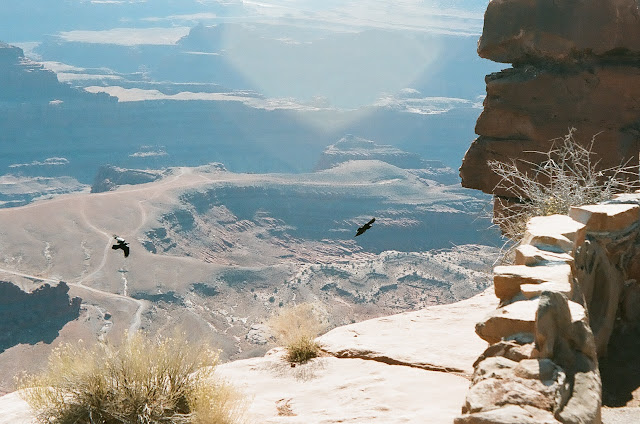 My ravens are not your ravens and certainly not Edgar Poe's.  Poe's ravens were only grim harbingers of death and decay. Your ravens are dark shapes winging across the horizon, and you ask "Is that a hawk?".  My ravens are giddily happy and carefree, incredibly social, infinitely wild.  I live at the southern boundary of their range in the eastern United States, but they are not rare.  They hang out in noisy gangs, forever squabbling and pestering, always friendly.  On trips to Colorado, Utah and Western Ontario ravens were my connection to home, as if ambassadors had been sent to say "You are welcome here as well."  It was their constant presence that made me feel at ease and deal with my loneliness for home and friends and my daughter.

Do I sometimes wish I were a raven? No, and I'm not one of those people who believes in other lives.  I believe I share the same fantasy that all must sometimes imagine- that of sprouting wings, soaring, of being able to understand the language of birds, understanding the air currents, feeling the atmospheric pressure, to sense the earths magnetism.  We all want to experience flying in that purest of forms, not in the clodding manner of mechanized flight.  We want to feel our muscles stretch, to raise great wings in salute to the sky, and like ravens- fly.  Ravens do this every day and the more I observe them, I know that they, of all creatures, comprehend, their lives a celebration of  a privilege uniquely theirs.  Ravens celebrate this in style.  Their days are so idle, their lives so uncomplicated that they spend long periods playing at flight, chasing each other, swooping, diving, barrel rolling in aerobatics so astounding as to shame any ace pilot in a daily exercise that can stem only from joy, all the while carrying on  incessant conversation as if to say "Look at me, look at what I can do".

No, my ravens are not gruesome or morbid.  The ravens I know are my friends, my daily companions- the essence of that wild spirit that speaks to my soul, calling me outdoors to play.

For Mandy
Posted by Fontinalis Rising at 6:21 PM