April, April, how do you not love April?  The snow is gone, the days are long enough to enjoy, the sun actually feels warm.  April is special to anglers in Michigan- it heralds the open season for multiple species.  In Trout Country April is especially important, as it ushers in the trout season, always the last Saturday of April. Out rolls the whole menagerie of fishing vests and hats, the bait fishermen, the spinner dudes, the Rapala rowdies.  I don't mean that disparagingly, as at one time or other I've done all those things and sometimes still do. Personally, PERSONALLY, I'm just as likely to be found out fishing for walleye on opening day, which coincides with the trout opener.  Why you ask?  I go to the rivers, fly rod in hand for some solitude, something hard to find on the trout opener here in the Big MI.  I'd rather not fight the crowds for some fishable water, and for me the opener has always been problematic and unpredictable- high dirty water, or too cold.  The truth of the matter is that now that I fly fish year round for steelhead, I've lost that unreachable itch to fish opening day for trout.  Anyhow, April doesn't say trout to me, she whispers one word in my ear that gets me going- steelhead.

Yes, steelhead are to April what, well, April is to steelhead- synonymous, at least to my mind.  All you dry fly snobs, bamboo purists, the Orvis crowd,  can have your Holy Water, your 3 weights, your delicate presentations- I want to brawl, to duke it out with that chrome queen.  I want to have to give chase.  I want my keister kicked and handed back to me by an angry river goddess. 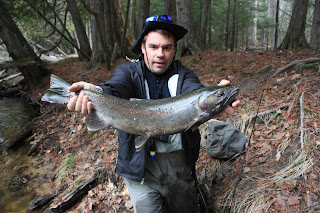 What's that you say?  Fall fish are hotter? Sure they are- keep thinking that.  What? Hardcore steelheaders fish the winter months?  You hate the crowds that come with the main run?  Any other silly objections you can throw my way?
While I love stripping streamers for late fall fish, and I fish all year in all conditions and hate crowds guess what- nothing beats the excitement and energy of the main spring run.  To see fish in those numbers, to feel the warmth of the sun, to feel the rivers and earth coming alive with spring and participate in an ancient ritual is priceless.  If you can't find some secluded water in Michigan you're not trying hard enough.  You can go to Michigans flagship streams- the PM, the Mo, the Big and Little Man if you like, but what do you expect you're going to find? Yeah, loads of anglers with sharp elbows.  With 12,000 miles of trout streams, a significant proportion of which get runs of steelhead, there's no excuse to go join the annual pig roast unless that's the kind of thing you like.  Get out there and explore a little. If I manage to get out mid-week, I always find water I can have to myself.

April marks perhaps the single biggest change of weather here, bridging the snow and frosts of March to the budding leaves and green growth of May.  It brings with it the first real bug hatches.  It used to herald the spring runoff, and you had to wait until at least the 10th to do any productive fishing, but lately we haven't gotten as much snow, or it goes in March, and so most of April has become productive.  With those changes, April has become a first rate month to strip streamers for steelhead and big browns.  April is incredibly exciting- the deer are running wild after being cooped up in their winter yards, we get the first hint of green, the first spring flowers, the first spring rains.  The birds return en masse.  Here in front of the house the geese, ducks and swans battle it out in territorial disputes that at times are deafening, while the eagles patrol overhead creating widespread panic.  The bears put in their first appearance, marking the time to take down my bird feeder before they do it for me.  Yeah, April is all that and more.  I usually have a lull in my work right when the steelhead fishing is hottest.  Perfect.

So why do I love April? You know why.  You can have your delicate dries of May, your June Hex hatch, the September salmon runs- I'll even let you have November Chrome. I fish all those seasons and more, but I still think April is the best.  It's just begun, and I can hardly contain myself.
Posted by Fontinalis Rising at 3:05 AM