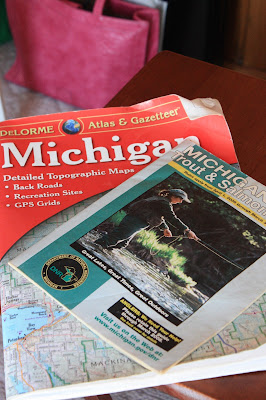 Well, it's done.  The flies are tied,  the rods are de-rigged and re-rigged.  The DeLorme atlas has been consulted, is ready to go.  My work is finished, for a couple of days anyhow, and I'm ready to head out tomorrow on an all day outing for steelhead.  I worked on the truck and fixed some things today and discovered more things to fix that can be put off until I'm done fishing.  I have four rivers in mind, three of which I've never fished for steelhead, so this should be interesting.  I haven't prepared that well- I'm lacking some groceries, but I'll get by on granola bars and gas station beef jerky.  Maybe I can pick up a piece of smoked fish at one of the local shops.

So, I'm up at 5, I'll make the coffee, load up and point the truck north.  I don't have far to go, but I'm going to make the most of it- first light, boots in the river. 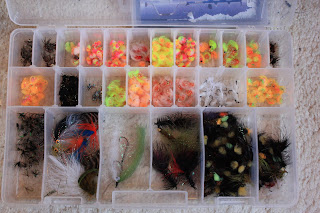 I'm also going to keep a promise to a certain cardboard angler- Cardboard Unaccomplished Angler that is or simply CUA.  The poor guy has been hanging out for like a month now.  Too many things have conspired against me until now.  A tough job deadline with 10-12 hour days, sickness, and bad weather and a late run.  It's time to get Cardboard Kirk out after steelhead finally before sending him on his merry way.  So wish me success.  The rivers are still high and stained, and the nights are still too cold, but those fish are there, and I'm going to find them.  Good night. 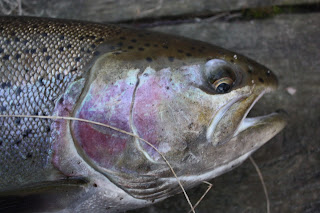 Posted by Fontinalis Rising at 8:30 PM