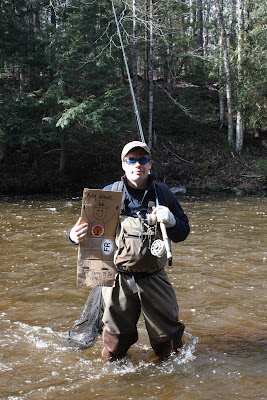 We have some pretty darn good steelhead fishing here in Michigan, and an idea began to form.  What if I could get Rebecca to play a little where-in-the-world-is-Cardboard-Kirk, send him on, let him experience the fishing in other parts of the country, test out his fish catching potential?  So I sent a message to Rebecca, and lo and behold she was open to the idea.  He arrived in the mail (first class, of course) a few days later.  In the meantime I managed to pick up on the fact that Kirk was hoping (see his comment in the link) that CUA might just possibly be headed to Andros Island with Rebecca for FIBfest ( the Fishing Industry Bloggers fest hosted by Deneki Outdoors).  So imagine his shock and horror when CUA showed up, not in sunny, balmy Andros Island, but in my cabin in Northern Michigan.  Yes, it was still winter then (no one has objectively proven it's not still winter now), but right on the cusp of spring and the steelhead runs.  I was hopeful.

Then, a lot of different things happened.  I was sick for 2 1/2 weeks in April.  I was sick and working 12 hour days in April.  When I did get one evening (I skipped out of work early, no apologies) I was so excited to be actually going that- I forgot him.  And I caught a steelhead, albeit a small one.  Then, work and more work, I actually had workers staying with me, the excuses continue ad nauseum.  I started getting discreet inquiries from Rebecca- "Are you done yet?  Because other people are clamoring for the opportunity to fish with CUA."  Really.  Is the real Kirk Werner this popular?  But when a demi-goddess makes inquiries you jump to attention.  So I worked even harder, set a firm deadline for my job completion so that I could take a few days off and take Cardboard Kirk on a proper outing.  The idea was to spend a few days fishing several rivers, showing CUA the local sights and chasing steel. 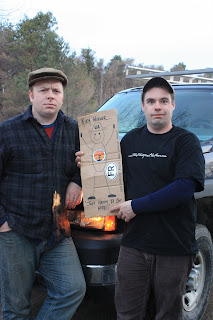 So finally, on Friday I got to take a full day and go fishing.  I called my friend Coyote Luke of the Most Things Custom blog and we planned our day- 3 rivers in the Upper Peninsula and a scenic stop or two.  I picked up Luke early and off we went.  We stopped off to get some pictures at the Mackinaw Bridge and Old Mackinaw light before heading across.  We got to the first river, Cardboard Kirk in tow, and double bam, I had two hook-ups in ten minutes.  They both got off rather quickly.  This was going to be great.  One problem.  We were wading one of the very shallowest parts of the river and it was a raging torrent.  We tried a couple of more lies I knew, but wading was all but out of the question.

So we loaded up Cardboard Kirk and headed to the Brevoort River, perhaps the UP's finest steelhead stream.  It's twenty feet wide, crystal clear, and all sugar sand.  I've heard that it gets steelhead, but have no idea where they would spawn.  We found some gravel at a power line, and I managed to hook up on two fish in the hole below, but again they came unpinned in seconds.  Was it the fact that my beadhead eggs were barbless, or was something more sinister going on?  Was I being undermined, cursed even, by the presence of Cardboard Kirk?  We left the Brevoort river and turned the truck west under beautiful sunny skies on perhaps the first really nice day of spring here.  We soon came to another river I had heard of.  It was very beautiful, with dark tannic water rushing over boulder falls and rapids as it dropped through high dunes covered in hardwoods on it's way to Lake Michigan.  We explored this little river for some time, with Coyote Luke catching a couple of small brookies in some pools, but we soon tired of fighting the tag alders, and headed back.  It was a great day, a beautiful day, a day spent bumping down dirt roads looking for new water.  It was a fun day spent with a friend and a cardboard character, goofing off in some wild country fishing for wild fish.  As we headed home, it began to rain (again) and rained all night long.

The next day I got the call from Phil- "We're going on a float, and bring Cardboard Kirk."
We floated the Pigeon river that day.  It was horrific.  The country was beautiful, but high winds were blowing down a river high and dirty from multiple heavy rains and six inches of snowmelt.  River conditions were treacherous to say the least, we didn't turn any fish, we did find some empty beds, and we did multiple strenuous portages over some ridiculous beaver dams.  All in all, I think CUA enjoyed himself, riding shotgun in the rear seat of the CC Drifter.  If nothing else it was a nice boat ride, and HE didn't have to carry the boat.

Sunday I was desperate.  The river gauges online were all reading high, but I had an idea.  I called up Terrance.  "Hey Terrance, I heard they're getting smelt in the UP, wanna go?"  Terrance is always up for a good adventure, and to my surprise his wife Kathy came along.  For those of you who may not know, smelt are a small schooling fish that moved into and at one time dominated the biomass in the Great Lakes.  They are delicious, and people used to fill garbage cans, even car trunks, with them when they ran in the spring.  Tales were told of schools so big running up the rivers that they would rise by a foot or more.  The typical way to fish them is with a dip net, though on inland lakes in the winter it's not uncommon to catch them on hook and line through the ice.  We went, stopping off first so I could try for steelhead.  No love.  We went and got some fire wood, drove to the river mouth and set up shop.  As soon as the boreal glow on the northern horizon began to fade we began getting smelt, and thus Cardboard Kirk got his first- and only, fish.  I returned north on Monday, hooked up on and lost two more steelhead, and then went and dipped another gallon of smelt.  The River Damsel has been mocking me for eating minnows.  The laugh is on her though, they really are that good.  While it may not have much to do with fly fishing, smelt dipping for me is a childhood memory of good times, the first chance to get outdoors in the spring, to bring home some really good fish.  The smelt disappeared in the 80's.  The DNR says this was the biggest run in 25 years, with guys filling buckets in two scoops.  I was glad to show CUA something unique to Michigan and Great Lakes culture.


So was my stint with Cardboard Kirk a success?  I'd say so.  No, we didn't catch any steelhead, but I don't think I can blame him.  Conditions were tough and have gotten tougher since.  The rains have continued, intensified, and now the rivers have jumped their banks and are flowing through the woods.  I think that Cardboard Kirk can truly be called Unaccomplished, at least in the state of Michigan.  Maybe now that he's gone I can catch some fish.

Posted by Fontinalis Rising at 7:53 AM