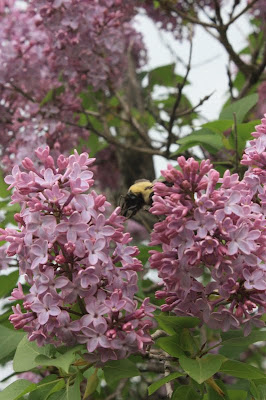 June in Northern Michigan begins lilac scented, a perfume so heady it will make you think you're in love, even if you're not.  On the outs with your dearly beloved?  Fill the house with fresh-cut lilacs and see what happens.  Everywhere I go right now it's all I smell, and so I drive around, love-drunk and irritable, trying to figure out why I'm so giddily happy.

If you're an angler you should be happy and in love- it's June.  When I started this series it was February, a month in which my best advice might be "stay in and watch TV" or "go to Florida", a month in which any comfortable notion of fly angling is laughable at best.  I think I gave some sort of "there, there" advice, we always do.  "Tie flies" we intone, "spend time with the wife", "get caught up on your reading".  Thin comfort to the fly angler whose bamboo 4 weight stands mouldering in a closet.

But now- now it's June.  Diametrically opposite in nature to that time, now it all lies spread before you, a great angling feast, a gluttony of piscatorial pursuit, a surfeit of opportunity.  It's not just that the bugs are hatching and the trout are looking up.  It's not just the perfect river temps, the Hex hatches, the verdant green.  It's not just that the bass and bluegills are bedding and feeding, the pike are still up shallow and aggressive, and the carp are on the flats.  It's that the days are so long, the sunlight so seemingly interminable- June is the month of the summer solstice and here the daylight will last 18 hours give or take.  You suffer Seasonal Affective Disorder in a good way now, or at least you'd better, after all that grousing you did in January. 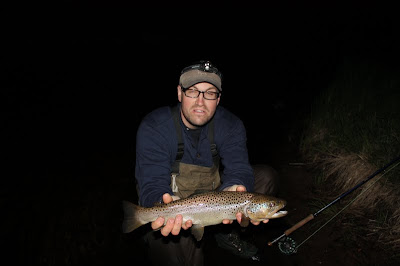 June is the month of sulfurs and drakes and March browns here, but really, when it comes down to it we're just piffling with those flies, amusing ourselves, catching little plippers and hoping that nice rise at the tailout is an 18 inch brown.  We're all waiting now, our anticipation close to boiling, like kids trying to sleep on Christmas Eve, keyed up about one event- the Hex hatch.  Hexagenia Limbata.  Words that roll off the tongue of every fly angler with a satisfying smack, the one Latin name everyone has memorized.  If most of us had our way, June would be renamed Hexagenia.  This goliath mayfly haunts the dreams of many a fly fisher, that annual event perhaps your sole opportunity to land a truly large brown trout on a dry fly.  There's a price of admission- they don't usually show until well after dark and dark doesn't arrive until after 11.  Some nights you stand out there and wait, and wait and wait until you realize nothing is going to happen.  Other times you go out there, and the bugs come, and the fish mysteriously won't feed- yes, this has happened to me.  But every year it does happen.  You stand in a spot you think most likely to hold good fish and hope that the bugs come off, waiting while the mosquitoes drone in your ears and bounce off your face.  Then you see them, one, then two, lifting from the water like angels ascending, silent and pale.  Trout feed here and there intermittently and still you stand on your sandy flat, patient for what's to come.  Then, just as the darkness descends it happens, a whirring of wings like static on the radio, and the river comes alive, the surface boiling with feeding fish.  Every fish in the river comes out, from two-incher to two-footer, and for awhile all you can hear is the continual smack, slurp and gulp of feeding trout.  If you focus on one fish you can time him and usually come up good, but the smart angler waits, he waits for the activity to die.  The hatch after all, will last into the wee hours of the morning, and you're not there to catch foot long fish.  Bide your time, catch a couple, wait for the noise and frenzy to subside, then listen, listen for one sound. "Sip.... shlipp.... shlurp... ship".  It's the sound of a fish too big to fill up in that initial madness, the sound of a truly large trout, still feeding long after lesser fish have sank to the bottom to rub their swollen bellies and moan in feted pleasure.  Those big fish feed differently, they feed in measured cadence, setting their own rhythm, unhurried as the river conveys bug after bug to their jaws.  This is your moment, but it's not just about timing.  You can hear the fish, can tell that he's right there, but you can't see anything, and so you must learn to gauge the distance and cast by sound and just hope that your fly drifts over him at the moment that he's ready to feed again.  They're not going to move two feet right or left when the river is delivering a flowing feast right overhead.  Then you have to time, by sound, the sound of the feed with where you think your fly is.  If it all comes together, then the real fun begins, as you battle a giant trout in a small stream in the pitch dark, not wanting to turn your light on and spook the rest of the river.  This night, and all the nocturnal aggravation and an annum of waiting is yours, your shot at holding a truly large brown.

The hex hatch lasts ten days or more, tapering off typically by July 4.  Towards the end most of the fish are so full that they fail to feed, no doubt suffering an annual case of Hexagenia indigestion. So all of you dry fly snobs- rejoice.  This is your month.  You've earned it. 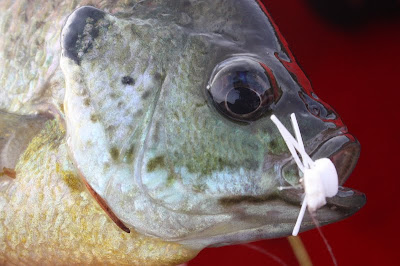 Having said all that, it seems anti-climactic to mention June's other pleasures, but if you're not the nocturnal type and hate the annual conclave-and-pig-roast that the Hex hatch has become, then June is still your month.  Get out your 8 or 9 weight and chase carp on the flats-  this is the peak month, there's no mosquitoes typically on Lake Michigan, and you can find all the solitude you want.  Large- and smallmouth bass feed greedily in June, and will smash frogs and poppers with abandon.  Pike and musky are still up shallow and will scare the bejeezus out of you if you take the time to throw some giant minnow patterns (note: wear eye protection please). Get out the 3 weight, take some foam spiders and a kid with you to the bluegill pond- it's easy work, and you'll hook a kid for life. 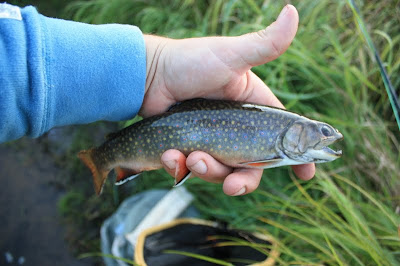 So, my fellow fly anglers, June is your month, your time.  The days are long, the nights are crazy and love is in the air.  Pick your quarry and choose your fly, it's all happening right now, in June.
Posted by Fontinalis Rising at 4:35 AM