A Big Fish for Fontinalis 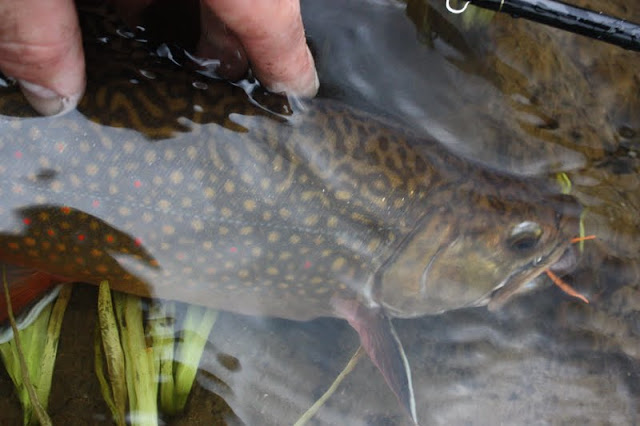 In my continued quest for fish for TakeMeFishing.org and National Fishing and Boating Week, I did not move on to the next water or the next fish.  No, I went right back to where I was the other night for more brook trout.  I had gotten off work a little earlier and wanted to see if I could actually catch one on camera.  To be honest, I haven't fished there in awhile and had forgotten how addictive small stream brook trout are.

Here's the intro I filmed with the Flipcam.

We had severe thunderstorms all day, and so I didn't expect much to happen.  I started out using a stimulator fly, but later switched over to a Chernobyl pattern that has worked well in the past.  On days like this you won't move a lot of fish, but the ones that do are usually pretty nice.  Here's a video of me yakking and casting.  Not much action, but the framing was nice, and it might be worth a look.  If you're pressed for time maybe skip this one.  If your name is Robert Vaughan, please don't weep at my casting.  I'm sorry.  You did your best.


After a couple more moves and takes I set up the Flipcam and did my usual spiel.  What happened next really floored me.  Check it out.

This is the first week I have ever taken a video camera with me fishing.  To actually have the largest brook trout of my life hit, on camera, and successfully land it, was amazing. But to have the camera batteries die at that moment? Priceless. Perhaps it's for the better that you don't get to see me ranting and waving this big fish around.  Either way it doesn't matter- it was one of the most sublime moments of my life.  I would have taken more still photos, but I had already spent a bunch of time talking to a dead camera and wanted to get him back into the river.  Here's some photo's, of my BEST fontinalis ever. 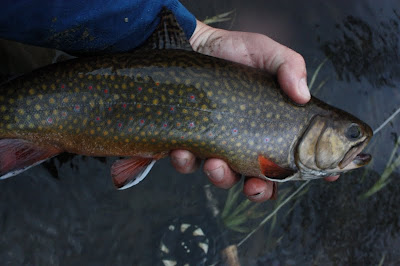 If you're new to fishing or haven't fished for brook trout, a 16 inch brook trout is a big deal.  It may not sound big, but the average brookie, especially in small streams, is about 6-8 inches.  Ten is a nice fish, 12" is big, 14" rare and makes your season- 16 inches, in a small stream?  Lifetime.  It's roughly equivalent to a 24 inch brown.  There's bigger fish out there, but not many, and there's only a handful of areas, usually remote, such as Labrador, northern Quebec and Ontario that regularly produce fish bigger than that.  Thus my excitement.  I'm very happy to share with you, TakeMeFishing.org, and the blogging underbelly ; ) what was for me a very exciting moment, one that may take years to repeat here.

It's still National Fishing and Boating Week, free fishing days are coming up this weekend in a lot of states including Michigan, so get out there.  As you can see, you never know what will happen.

Posted by Fontinalis Rising at 4:17 AM