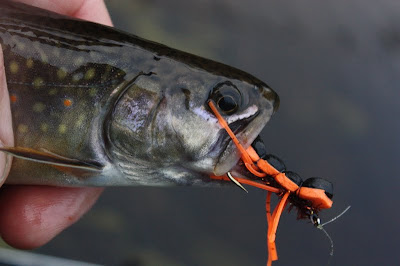 I had all of these high hopes for National Fishing and Boating Week.  A reasonable work schedule.  Lovely summer weather.  Flats fishing carp and smallmouth on Lake Michigan, paddling inland lakes for bass and bluegills and pike, a quiet evening on a pothole lake for rainbows, brookies and smallmouth, throwing dries for browns.

Instead, I had an arduous work schedule, and it was a cold rainy week.  I knew that the topwater bite would be dead on the lakes, and forget about flats fishing.  The most productive thing to do was go back for brook trout.

So I ventured out with my friend Coyote Luke of the Most Things Custom blog.  It will take me some time to get into video editing, so please bear with me.  I tried to keep each clip short. Here's the intro.

It was quite chilly with temps in the 50's, and we didn't expect much to happen, but wouldn't you know, some BWO's started coming off, and even some sulfurs.  Here's our first take on it.

We finally decided to match the hatch, and here's what happened.

Here's Luke's second fish of the day.  My apologies to The Fiberglass Manifesto.

I messed around and switched flies a couple times, but finally came up with a fish myself.

As the day wore on, the temperature started to drop.  Bug and fish activity all but ceased.  It was a great outing for exploring water I used to know intimately.  A lot of beaver activity has been eliminated, entire holes are gone, and new ones formed.  You can see the effects of extreme high water everywhere.  We walked back through the woods in the general direction of the truck.  Here's what happened next.

OK, so it's low brow comedy.  Luke is one of the most hilarious people you can spend a day with on the water.  Get him and my brother (his best buddy) together and it goes downhill from there.  Part of what I tried to capture in this post is the camaraderie that develops when you spend time outdoors.  It can be hard at first to be "yourself" on camera, but with enough time you relax and have fun.  I hope everyone had this much fun getting out on the water this week.

Posted by Fontinalis Rising at 7:47 PM