One Day on the Water 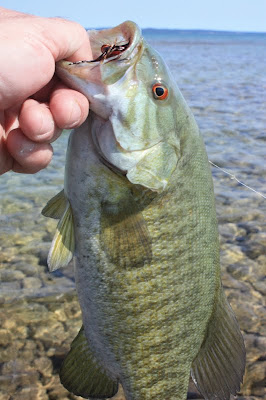 I went out without hope, I came back inspired.  Blissful.  Sublimely happy.  I'll mostly say this with pictures.  There's one video down there- I posted it because the footage is better than the photos.

I was supposed to work this day (Saturday June 18) but I had a backlog of things that had to get done, which took all of the morning, so I texted my customer to let him know I'd come Sunday, finished my work about 1:30 in the afternoon, loaded my kayak and gear, and pointed the truck north, back to Sturgeon Bay on Lake Michigan.  When I got there, the wind was howling at a steady 25 mph, with gusts, but the sun was shining, the day was beautiful, and the water beckoned.

I had barely gotten started up the coast when I started seeing carp- dozens of them, 200 or more on the first flat I came to.  I was unable to hook up on carp, but did manage one smallmouth, and so I fished out the camera.  I spooked the carp off shore with my wild casting in that wind, managed to hook my own caboose, and so went further up the coast to find fish.  At my next stop I found this one. 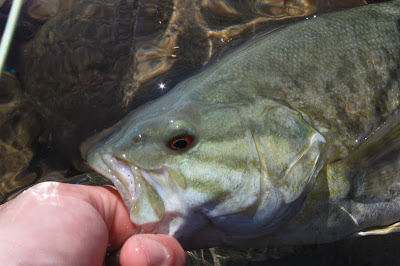 Just a random spot on the shore, nothing special, but I was eyeing a large rock a little ways up near a reef and caught three more smallmouth. 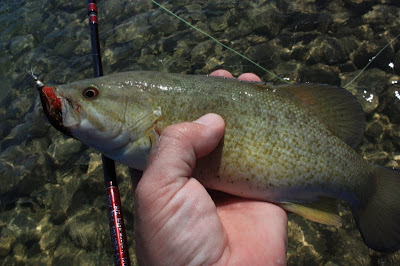 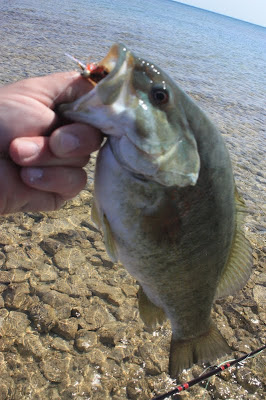 When I returned to the kayak, the wind had blown my paddle away and it was only this rock that saved it. 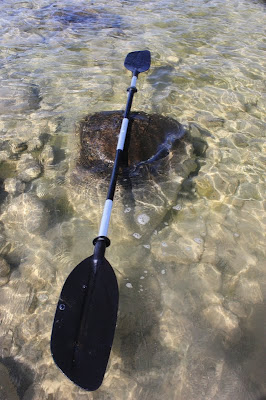 From here I paddled all the way to the cut, where Wilderness point ends and Waugoshaunce Island begins.  I paddled to a small rocky islet and cast around.  Here's what I came up with. 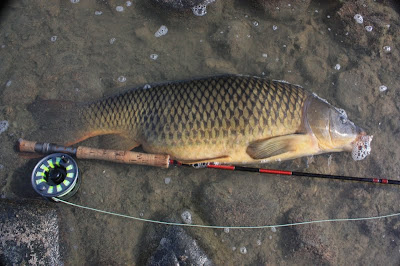 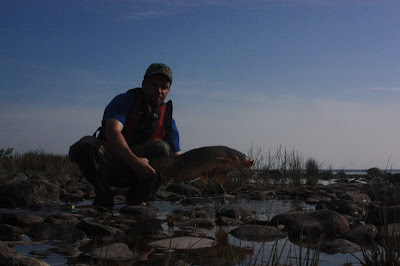 That's right, my first carp on the fly.  Here's video of me landing it, as the quality is a lot better than the photos I took.


I have to say that this fish was not particularly "hot", I did not see my backing.  He took most of my fly line, but I actually hooked up in deeper water, about six feet, and because it was the deepest spot for some distance around I don't think he wanted to leave it.  The fish I spooked on the flats took off much faster than this fish, so I'm not giving up on the "golden bone" dream.

It was a lovely day, with awesome scenery and fantastic fishing despite the wind.  I probably saw upwards of 500 carp in huge shifting schools or small bands.  The sea birds, the eagles, the sky and water all combine for a memorable experience.  It really is a dream destination, and only 30 minutes from my house.  This was my first time paddling out that far, and it was amazing how different the geology and water conditions were from the rest of the area I live in. 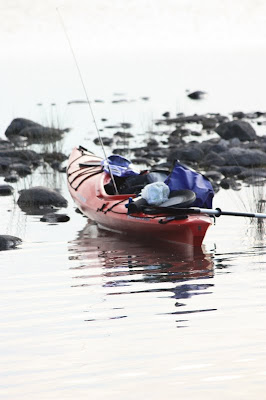 As the sun began to drop and the sight fishing got tougher, I ate my dinner on my little islet, tried for those carp again, then started the hour long paddle back to the truck.  I could see a storm pounding its way across the U.P. and hoped it would miss me or hold off until I got home.  I'll definitely be going back soon to fish the waters around the island.  The satellite views show it to be as big as the point itself, with even more extensive reefs and flats.  The rivers are blown out right now from a week of rain, so this may be the best option anyways.  I'll let you know how it goes.

Posted by Fontinalis Rising at 7:33 AM