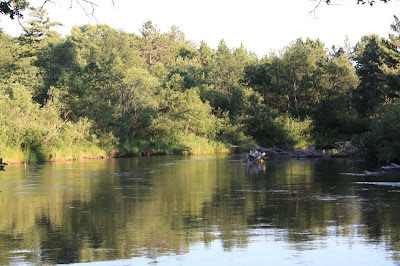 The sky shimmers like a hammered metal bowl, crisp and bright.  The heat is steady, and even the storms are sedate, flashing and rumbling, dropping some rain before trundling on.  July is nothing if not monolithic, a single event of sky and heat, warm water and warm nights.  There are no transitions in July, not here.  The major hatches are mostly over now.  Oh, there may be a few stray Hexes left the beginning of the month, but those quickly die out.  The rivers run clear and low, and the fish, fattened by two months of steady mayflies, back into the holes, fat and satisfied, trying to avoid the light and bright, and the steady parade of canoes and fisherman.  July may perhaps be the toughest month for fly fishing. 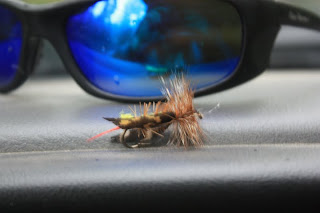 Me, I don't care.  I've just spent three months hammering the rivers.  I like to take a break the first ten days of July.  It's a time to go camping or kayaking, do some work around the house, go to the beach.  There's no shortage of things to do.  But like you, I soon get the itch, my work generally slows down and then it's time to break out the hoppers.  I love hopper fishing.  It's a big fly, easy to fish, and the fish go nuts for them.  You generally don't catch huge fish, just lots of eager browns and brook trout looking for a big meal.  You might even catch a 15 incher.  It's not the point though.  The point is seeing the big splashy strike of a fish intent on killing your fly.  You catch a lot of fish on hoppers. 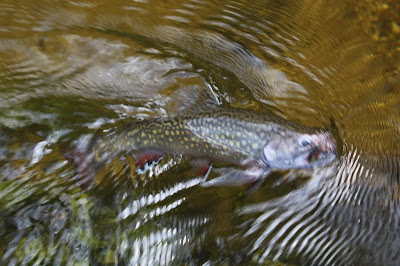 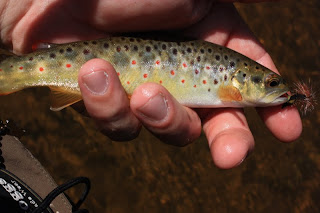 July may not be the best bass fishing month, but it's a great time to hit the lily pads early and late with frog patterns.  It's awesome to watch a largemouth bust the surface on a frog.  Middle of the day can be tough, but from first light up until 10 am the fishing can be fantastic.  The evening hours can be good as well, though not feverish like the mornings.  In the evenings I'll opt for leeches or streamers.

If you know where to go, summer steelhead put in an appearance in Michigan, but a lot of those fisheries are further south.  Still, last summer I went to one of my local rivers without a  rod, only to find fresh beds in the gravel.  Something big made them.  I want to go back and check it out after this latest batch of storms we just had.  I think that wet wading while fighting a steelhead would do something positive for my soul.

July time is also night time- mousing for browns.  I plan on devoting a post to it.  It may be my favorite form of fishing period, and it heats up in July.  Big fish looking for a big meal.  Fish that make sounds that scare you in the dark.  Fish that hunt.  In July my inner creature of the night emerges, roams freely and stalks the local rivers.  By day I am a wrecked looking creature, bleary eyed, slumped over in fatigue, hardly communicative.  But by night I come alive, alert, and I hunt fish that for most are lifetime fish.  If the days are too hot, the nights are just right.  Fish it up.  My personal best was a 23" brown last year, but I've lost much, much bigger.  Fish that made my 8 weight rod look light.  Fish that ran downstream and broke my 12 pound Maxima as if it was nothing.  Game on.

I went fishing last night.  My camera and phone batteries were dead, so there's no pictures to share.  I bushwhacked into a remote section of brook trout water and found it as I've been describing- low and clear under a clear blue sky.  The wind threw my casts every which way, and there was barely enough water to call it a trout stream.  Still I persevered and fought my way through the tag alders, the gusts of wind, the profusion of blowdowns and jumbled log jams, the pestiferous creek chubs and deer flies.  It took most of the evening to even see a trout, but before it was over I caught one, an 11 inch brookie that bent my 4 weight glass rod and refused to give up.  Three river bends later I reached the bridge.

In the end, July must end.  The fireworks, the hot dogs and sparklers, the boating and  beaching, the sheer fun of it all.  Speaking as a fly fisherman, it's a lazy month, one spent aimlessly drifting, but isn't that the point of fly fishing?  To have one pursuit that doesn't matter?  It could be, then, that July is the ultimate month, The Month of Casting, the month to do nothing; to catch rays, to cast endlessly, to imagine that this bubble of heat and light and magic is all yours, the clear waters rippling just for you, the fish hiding just to be coy, the summer lasting indefinitely, all yours for the taking.

Posted by Fontinalis Rising at 5:12 AM