"At least there's poverty- they'll never take that from us" -my father. 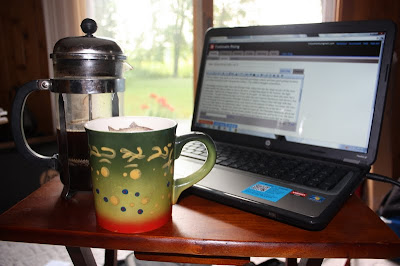 Well, the biggest news I have is that I finally bought a laptop, my first one, which hopefully will make my blogging more versatile.  I won't have to be chained to my desk at home, can drink my coffee downstairs looking out my glass wall at the river and marsh while I do this.  It will also help me to blog on location.  I'll see how versatile a tool I can make this thing.  My blog suffers from the fact that I only keep abreast of technology as far as I absolutely have to, and then I get right back to the water.  It's a delicate balance- time spent on the water hopefully generating content, and time spent getting brushed up on the tech stuff so that I can generate content.  The outdoor bloggers conundrum.
I did manage to get in a night float with Phil last week- funny how the sky when we got off the river looked exactly the same as when we got on the river, a bright blue band on the horizon, the light crepuscular.  There's a lot of things that go "bump" in the night.  No fish pics to share this time, but a lot of action.  I'm still working the bugs out of my night flies (as Cameron Mortenson well knows), but I'm hoping a campfire tying session with Mike Schmidt of Angler's Choice Flies will help with that.  My current gurgler fly is an adaptation all my own, based on the patterns of others, of course, but who of us can really claim to be original these days?  I'd show you my pattern, but as the the saying goes, then I'd have to kill you.  By the way, check out Cameron's post on The Fiberglass Manifesto about our night trip ten days ago.  I thought I'd let him decide whether to tell about his spill in the river, but since he did in his post, here's my version.  We had stopped in an area that we know holds fish on a long bend.  There's a small island on the inside of the bend.  We were to wade to the island and then cross it to the downstream end.  I heard Phil say something about deep water, but I had thought he meant at the bottom of the island.  Cameron is walking in front of me in ankle deep water crossing to the island, and next thing I know he plunges forward and falls in.  Now, I'm not trying to hurt his pride anymore by dredging this up (no pun intended), but this seems to happen to everyone who fishes with me for the first time- call it the FR curse.  More than once I've looked over my shoulder where my friend should be, only to see a hat, or just some swirling water.  So if for some odd reason you've thought to yourself "Hey, I'd like to fish with that FR dude someday" consider yourself warned.  In my defense, the ultra-high water we had this spring rearranged a lot of our rivers.  That spot last year was just a shallow trickle.

I spent the weekend downstate not fishing, but I did end up with a laptop.  I have several writing projects underway outside of this blog- I'll keep you posted if they make it into public circulation, or just post them here.  With a blog you can't go wrong.  My first piece published (by The Cedar Sweeper magazine) was written for this blog and at the last minute I submitted it on the off chance that Chuck would want it- he did.  I'll still post it, once the next issue of The Cedar Sweeper comes out.  As I was saying, with the blog, I can write these pieces and either post them or submit them.  If they get rejected I can still post them.  Not that I'm posting all the junk here (there may be room for debate on that) but that no matter what there's an outlet for all the drivel leaking from my mind.

Well, it's time to get this up and get going.  Lot's of work to do this week.  By the way, being able to blog while staring out my window has already paid off, as I got to see the cranes lift off from their overnight roosting spot in front of the house, and three half-grown raccoons trundled across my seawall while I was typing this.  I'll have to put the big lens on the camera and keep it close from now on.

Posted by Fontinalis Rising at 6:30 AM