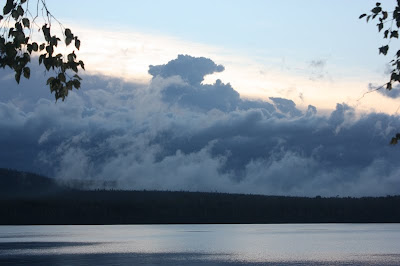 Wednesday August 24, 2011-  talk about missed opportunities.  The wind blew all night.  Each time I stirred in the night I could hear the waves lapping on the shore.  I woke during the first graying light, still to the sound of waves, and now another sound- thunder.   “Good, I’ll sleep in” I thought, and rolled back over.  Lightning flashed constantly and the thunder rolled.  After a while it grew more distant, and the next time I woke, it was still gray, lightning still flashed, but I could not hear thunder or waves.  I got up and made coffee as the storm lifted its skirt up over the mountain and trundled on.  Fish started rising on the lake, and I sat there drinking my coffee and contemplating my move.  After a couple of large boils in front of camp I could take it no more and started gearing up, and just as I was about to launch, the first gust of wind blew, hard.  By the time I got back to my corner of the lake its entire surface was rippling under the gusts.  I blind casted for a while, and even got one nice fish to roll, but with the wind blowing in my face directly from the north, I decided to paddle back to camp and park and work the shore in front of camp.  Several big fish had rolled there this morning, so why not.  The wind was making me peevish, throwing my casts every which direction, but I did manage to get one more good fish to hit before the sun rose enough to make it all pointless.  I wandered back to camp, Sam was up, and so we made breakfast and formulated a plan- to explore the area around Black Sturgeon river. 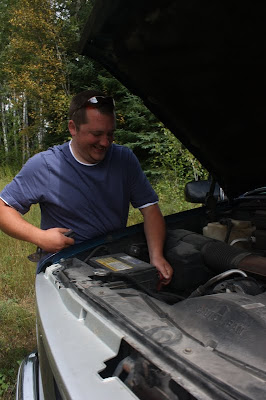 We loaded up our gear and secured camp, hopped in the Suburban and- it wouldn’t start.  Two days of it being parked with us opening and closing the doors had worn out the battery.  Two cars passed during the ten minutes we fooled with it, but when I took jumper cables and stood out by the road to flag down help, no one came for the next hour.  You would think that this would have ticked me off, but I was actually quite content- I had said I wanted something to go wrong, so why not this?  My only regret was that I didn’t bring a chair and book with me to read out there.  A nice young guy in a work truck came along and gave us a jump, and we ran into Nipigon to re-supply.  We got the groceries we needed and then headed west on 17.
Turning up Black Sturgeon road we came to the first creek of interest, Shillabeer, but there were people there and we kept going several miles more until we got to a road that crosses Black Sturgeon river.   We parked at the bridge and followed the wolf and bear tracks upstream.  Soon it began to rain, no fish stirred whatsoever and we soon left.  We headed back to Shillabeer and were flagged down by a friendly conservation officer checking for fish.  We had none of course, but he was friendly and chatty, asking if we were licensed and had Crown Land camping permits, then giving us advice on places to check out, including directions to John Creek.  We tried Shillabeer for some time, but it was milky with runoff, and spooky.  The rain poured, but when you’re wearing waders and rain gear who cares?  The spooky  part was that the area was loaded with berries and bear sign, and all the riparian growth was head high- it would be easy to walk up on a bear in this mess and wind and surprise it.  I’ve heard that bears like to be surprised.  Despite the thick cover, the locals had beaten a path for quite some distance upstream, and no fish stirred.  We got a feeling that this little creek was too close to town, too accessible, and so we went back up to the Suburban and decided to head north and find John Creek.
The conservation officer had given us directions- head north as far as you’ve come already (20+ miles?) until you reach a gravel airstrip.  Across from it will be a track heading straight downhill.   At the bottom is John Creek.  We got to the bottom to find the remains of someone’s long-term campsite, First Nations perhaps.  A plywood shack with a birch pole frame lay flat on the ground, as if some giant had stepped on it.  Random trash, a couple of fire rings, and shot up targets were the remains of someone’s idea of bush camp.  On wandering down to the creek we found it to be a ditch, with barely a flow, but the first hole was deep, the bottom invisible despite the water clarity.  I flipped a skunk onto its surface, and a resounding smack answered any questions we had about fish.  Sam stayed below to toss spinners, but the next hole gave up three more beautiful fish, and so I called Sam over, had him get his 5 weight and gave him a skunk.  John Creek turned out to be small stream brook trout fishing at it’s best- tight, choked, tiny, loaded with trout, barely a stream at all where it flowed, but punctuated with deep dark holes, brushy cover, undercut banks, and dozens of eager trout.  I caught and released fish after fish, while the gale raged overhead and the rain poured, water streaming down my grin that wouldn’t quit. 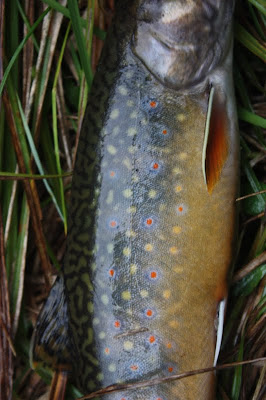 I love small stream.  We wandered up, breaking brush, following the slight trail, cursing the tag alders and catching fish.  I reached one long bend full of grass, the kind that trails in the current and began casting.  First one, then another and another large fish came out and hammered the skunk, but either I missed, or the fish did.  On perhaps the sixth cast it got nailed by a fish that was at least 14”,  but it shook the hook loose in a matter of seconds, leaving me breathless.  On the next cast I landed a beautiful 9” fish, and this one I kept.  Sam and I were going to have fish for dinner.  We continued to fish, kept four more fish, and pushed on until the breaks in the clouds revealed the yellowing light as the sky seemed to race overhead, and the brush got so thick it seemed we would be trapped.  We hiked out in gathering gloom, stopping to photograph flowers, and made it back to the truck.  When we topped the hill at the main road the sun dipped below the clouds, and the whole sky seemed to catch fire.  Then not two miles down the road, Sam suddenly laid on the brakes, just in time to avoid hitting a young bull moose.  There it was- the elusive Canadian moose.  After all my trips to Canada, mooseless, here was one trotting down the road, fifty feet in front of our bumper.  While his antlers were barely visible, he was enormous, the size of the draft horses you see at the county fair, and I was fascinated at how his hind quarters seemed to work in the same fashion, massive muscles rippling under his dark hide.  Despite the size of our vehicle, we were looking up at his hind end, and I realized the reason for all the roadside warning signs- you do not want to hit one of these things.  We followed him for almost 200 yards, trying fruitlessly to get pictures in the near dark before he crashed off into the brush.  Further down the road, in a cut-over area, we spotted two whitetail bucks, one with a rack so tall it made him look like an elk. 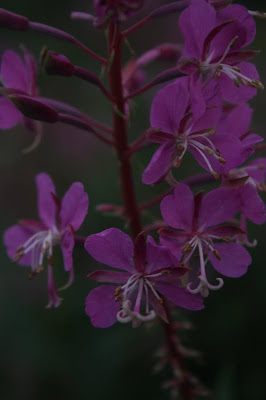 It took 90 minutes to get back to camp, the odometer saying we had traveled 80 miles one way.  We returned to find camp in disarray- our chairs blown over, the clothing we had left to dry laying everywhere, and the worst of it- the rain fly had blown off the tent, soaking our beds.  We did what we could to clean up, but it was already 10:30 and so we didn’t make dinner.  My sleeping bag was soaked, but being a space-age synthetic it was just as warm as if it was dry, and so I read my Paul Theroux travelogue until my eyes became too heavy to continue, and then slept, warm and soggy, the wind howling a gale, the tent at times seeming to collapse on us before rebounding.  When I awoke in the middle of the night I was dry and warm, my bag having dried from my body heat, a testament to good gear and modern technology.  The gale would continue until dawn.
Posted by Fontinalis Rising at 9:06 AM