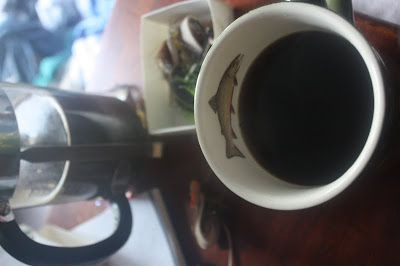 Aaaauauuuuughghgauauuuughhgghhh!!!.  Good morning!  Monday again?  Let's have some joe.  I still haven't  gone through with my threats to order coffee from all over the place so I'm still drinking Starbuck's for the most part.  I'll have to start my coffee tour soon.

Well, it was another busy week.  One might think that with having recently caught a giant brown trout that I would be hitting the rivers even harder, but I haven't night fished since then.  Too busy, and my deadlines have been too tight.

One thing that has made my deadlines even tighter is my upcoming trip to Nipigon, Ontario.  I've read about Nipigon since childhood.  The Nipigon river is where the world record brook trout was caught, 14 pounds.  About 9 years ago I came across something about the giant brook trout there, and have been planning to go ever since.  One thing or another has always interfered, but this summer I decided it was time to make it happen.  My brother Sam is going with me which will be great.  Where I live in Northern Michigan is kind of a boundary between civilization and wilderness.  What that means is that it's possible to make a living and live a middle class life here, but it's also very wild.  It is very wild here, the winters are harsh, and the back country can be unforgiving.  It still breeds the type of woodsmen and outdoors people that you might have thought had gone extinct.  They're not, and my brother Sam is one of them.  I'm very happy he's going on this trip, because when I think of Sam one word comes to mind- tough.  He's a big strong guy, quiet and reserved if you don't know him, he's worked as a logger, but owns an auto body business now, he's an incredibly talented guitarist.  He's married to a beautiful wife and has two lovely daughters.  He lives about an hour away and so I don't see him very often.  I gave him one of my 5 weight rods this year, which he has been using and catching some fish, so I'm really looking forward to getting up there and fly fishing with him for these giant brook trout.  I've read that the fish average 3-5 pounds, and it's only a nine hour drive from my house.  You might be catching on to the fact that I'm as amped about spending time with my brother as I am about the fishing.  Fish or no fish, it's going to be a great trip.  I will, of course, be shooting reams of pictures, taking notes, and writing, writing, writing.  I'll try to hit a wi-fi spot somewhere to get a post or two up, but I've noticed the difficulties a lot of other bloggers have had with so-called "live" blogging, and so won't make any promises.
I did manage to get out Saturday morning with Phil, his dad Phil, and Phil's nephew Luke.  We were trolling Lake Michigan for salmon and lake trout.  We got three lakers to the boat, but none were keepers (they have to be 24") and the salmon were a no-show.  Still, it was a gorgeous morning, Luke is a very nice young man, and I hope he'll take to the outdoors like his uncle. 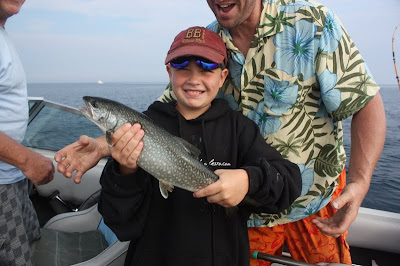 Sunday afternoon I went kayaking with some buddies on the Pigeon river, and took my Redington Classic Trout 3 weight to swing some soft hackles for rainbows.  It's tough to do when you're kayaking with a group, but it was just an excuse to dink around.  I never did get together a big multi-day kayaking trip this year, and with the trips I have planned it probably won't happen.  I'll definitely have to amend that next year.  What I would really like to do is plan a multi-day trip on the upper Missouri river in Montana, or the Dolores river in Colorado.  That canyon country in southwest Colorado is little visited, incredibly beautiful, and I hear the fishing isn't bad either.  Things that make you say hmmmmmm.....   If anyone of you out there have any suggestions for wild rivers in the US that would support multi-day floats through back country, please pass them on.  This was a crazy group of guys and I think this kayak outing will have to make it into a post this week.  It included this....
I did manage a couple of fish yesterday including this beautiful little brook trout, so I was well pleased with my weekend.  It was great spending time with so many friends, and I'm looking forward to a busy week. 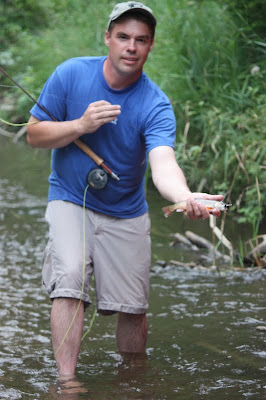 
Posted by Fontinalis Rising at 5:43 AM