The Run-Up to Nipigon- Gear 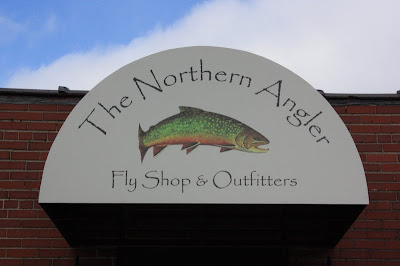 My big trip to Nipigon Ontario, in search of giant brook trout (Salvelinus fontinalis) is fast approaching. We leave August 20.  I've had several gear needs develop over the last weeks and months, as well as some wants.

Last fall I bought some Frogg Toggs waders for $100, then immediately put 30 miles of dry hiking on them and generally thrashed them ever since.  I also bought $60 wading boots at the same time that left a lot to be desired.  The side walls started blowing out a couple of weeks ago, and I know they're not long for this world. The waders have leaked since May.
So, when I got rained out of work today, I made my way down to The Northern Angler fly shop in Traverse City to get some gear.  I'll have to admit that I almost ordered stuff online, but thought better of it.  For one thing, I would have been just guessing at the sizing, and spending that much money on stuff I hadn't tried on made me nervous.  I also like to support local businesses whenever I can, and I love what Brian Pitser is doing at TNA. 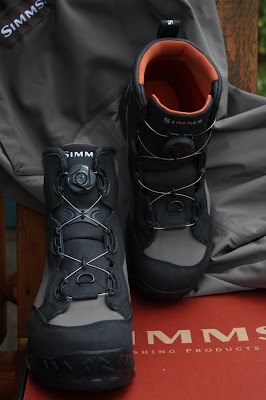 First the boots- the side walls on my current cheap pair started blowing out a couple of weeks ago, and have proceeded to decline at a rapid pace.  My buddy Tim got a pair of Korkers with the aircraft cable lacing system and swears by them.  I ended up getting the Simms RiverTek BOA boots with the Vibram sole.  I've heard a lot of back and forth about felt versus the Vibram sole, especially now that Simms has decided to bring felt back into the fold, but several of my friends swear by the Vibram and so I took a leap of faith.  I love the BOA lacing system, and the support in this boot feels amazing.

Then, the waders- I've been fighting this leak in my Frogg Toggs since early spring.  I think for the price they were excellent waders, but not up to the abuse I put them through.  I fish way too much, and bushwhack way too much.  I was interested in a set of Redington Sonic Pro waders, but they didn't have them in my size.  These Simms Freestone stockingfoots are very popular, and I wore them aroung the shop for about a half hour.  They're incredibly comfortable, the fit was just right, and I loved the fact that the features of the waders are made to mesh with the boots.   I did try on the Redington Sonic Pro pants but the clip on the gravel guards doesnt work well with the loop on the Simms boots, and so I gave up on that option.  I'm really happy with my choice- they were $50 cheaper than the Redington's, and they are designed to work with the boots, which I like.  I should add that Brian threw in a Simms Taco gear bag for buying boots and waders, which will provide great storage for travel. 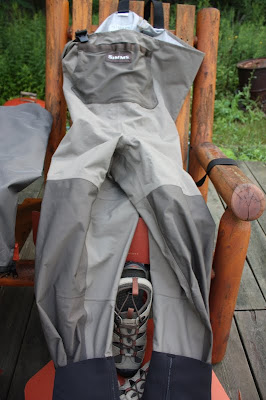 Next- Water shoes.  I have this pair of Teva open toe sandals that I've had for years, and continue to use for sentimental reasons, but it seems like every time I go out, I hurt my feet somehow.  Sunday's kayaking trip was the last straw- I slipped on something in the river and jammed something sharp under a toenail.  The ensuing infection..... I'll stop there, suffice it to say that I decided it was time to get water shoes.  I need more protection, especially for my kayaking, and for walking the flats on those slick rocks up at Sturgeon Bay.  I was going to head to Dunham's Sports after I left The Northern Angler, but then these Simm's Stream Tread sandals caught my eye.  They have the Stream Tread Vibram sole, a hard toe that should offer lots of protection, and at $90 the price was right.

Finally- the rod.  I have three 8 weight rods.  One is an old glass heirloom.  One is a Redington Crosswater that I use for chuck 'n' duck for salmon and steelhead, and the last is my Flextec.  I've broken the tip off of it twice and just glued a new one on each time.  I don't really want to pay to mail a $100 rod back to England to have it fixed in the middle of steelhead season.  To its credit, I've learned to double haul with it, I caught my first carp, loads of steelhead and salmon, and that giant brown on it.  But this trip is all about streamer fishing, and I'll be working a rod harder than I ever have.  I'll be fishing for brook trout in the 3-9 pound range- fish as big as the browns I fish at home.  The Nipigon river is another consideration- it is big and deep, with loads of boulder structure, and a heavy current.  I'll be fishing a 350 grain Streamer Express line and 4-6 inch streamers all day long.  I want need a cannon.  My buddy Phil has a 6 weight Temple Fork Outfitters TiCRX streamer rod.  I've fished it a lot and can tell you it is a dream to cast.  I ordered an 8 weight TiCRX from Brian and can't wait to use it. CANNON!
And lastly (does that come after Finally?)- tying materials.  I loaded up on some gaps in the supply.  The vise is going with me on this trip.  I'm going to throw everything I know and have at these fish.  Also, I lost my entire smallmouth/carp box in June, and so stocked up on brown and rusty colors.  I don't know how much of that kind of fishing I'll get in from here on out, but I want to be prepared.

I spent more money than I like to at one time, but it was just the way it worked out.  If my old waders and boots weren't on their way out, I wouldn't have gotten new just for a big trip. But with fall salmon, steelhead and brown trout fishing coming up fast I need to be ready.  I feel like a walking Simm's advertisement now, but that's just the way it worked out.  I have no affiliations with Simm's and I'm not endorsed by them in any way.  I've long been aware that they make quality products.

I'd like to thank Brian Pitser and the crew at The Northern Angler for their helpfulness.  Brian's pricing is competitive, they are very knowledgeable about their products, his store is always well stocked, and they'll spend all the time with you that you need to make a decision and feel comfortable with your purchases.  You might think that I would have wanted to save the $50 on gas I spent driving to Traverse City and just order the stuff online, but it was too much money being spent to just order this stuff sight unseen, and my shopping experience at TNA reaffirmed the role of the local fly shop in my mind.
Posted by Fontinalis Rising at 5:58 AM