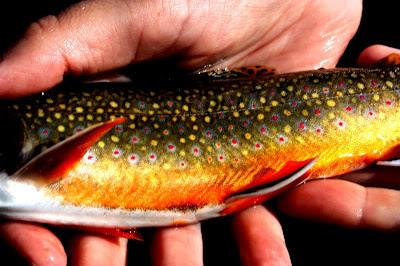 Author's note- I wrote this piece not too long after catching what was at the time my biggest brook trout ever in June of this year.  I wrote it to share some insight and techniques, but also because I was surprised at some criticism I received over my choice of fly etc. never mind that I had actually caught the fish.  I wrote the piece for Fontinalis Rising, and at the last minute submitted it to The Cedar Sweeper Magazine for publication.  It ended up being my first published piece ever.  My thanks to Chuck Sams for his continued interest in my work.  I'm posting it here now so that my blog audience can read it.  As you know, I went to Nipigon Ontario later this summer and caught much bigger brookies than this one but found that my ideas pertaining to brook trout held true; some pics of those fish are also included toward the bottom.  I hope you enjoy and find this piece useful.  JT/FR 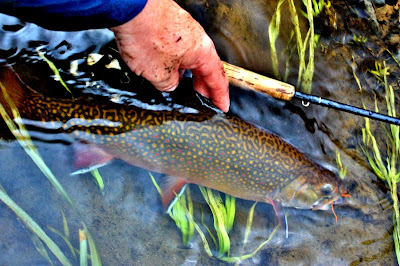 Since I am a newly minted expert on brook trout, having landed a personal best 16-incher as of late, I'd like to share some nuggets. Yes I'm chest thumping.  Please forgive.

I've gotten some sourgrapes criticism for catching my big brook trout on a chernobyl pattern, which is basically a Whopper wrapper on a hook.  I have one thing to say to this, but a picture is worth a thousand "Ha, ha"s.

I have three methodologies when fishing brook trout- Match the Hatch, Stimulator, and Sub-surface.  Guess which produces the most? It ain't Match the Hatch.

Here's what I've found.  Brook trout are not brown trout.  For example, I fished that river, that day, because I knew that the weather would have the browns put down, but that I'd have a snowballs chance at a nice brookie.  It was overcast, chilly and we had had a serious dump of rain, but that stretch of river does not dirty up readily.
Now, given those conditions, and that there were no active bugs, I went Stimulator.  What is it?  It's anything from a stimulator pattern, to a Whopper-on-a-Stick - yeah, a Chernobyl.  Stimulator is legs, eyes, color, flash, hair and size- anything that pushes buttons, usually to the extreme.  A natural insect has legs, which they articulate and pulse in order to swim or in distress.  Big rubber legs pulse and twitch, like legs cut off by a freight car.  It hits that button, with a jackhammer.

I use Stimulator patterns any time the fish are down, the bite is off, the weather is changing, it's bright, it's hot, it's cold and so on.  Any type of disturbance in the Brook Trout Force.  That big Chernobyl, that day, said big meal to a big trout, and with flash, size, and legs, it pushed a lot of buttons.

Sub-surface- i.e. streamers etc.  Brook trout like all trout do most of their feeding underwater.  They are most comfortable not having to show themselves to land- and air-based predators.  Nymphs work, but soft hackles are deadly on brook trout.  Swing, baby, swing.  A lot of brook trout rivers are too small and have soft bottoms that aren't suited to downstream fishing.  You can fish soft hackles upstream, or even indicator fish them.  They love partridge and orange.
Streamers are my favorite for brook trout, and I've landed nice fish, 10" and up on muddlers, black nosed dace, and Mickey Finns.  Red and yellow are big draws for brook trout, and I've recently started tying size 6 Zoo Cougars with a red collar- I have a hunch this will catch the biggest brookie in any river.  I'll get back to you on that.  I could lull you to sleep with the blah blah on woolly buggers.  Yes they work. 'Nuff  said.   Black, Olive, purple- knock yourself out.  Skunks are a red hot fly for brookies as well.

Match-the-Hatch.  Yes, there are times when brookies are keyed in and keyed up on specific bugs.  The other night it was blue-winged olives, but only in certain stretches of river. In other stretches, it was sulfur emergers.  I've had maddening evenings, with nice fish rising and big mayflies in the air and on the water, only to find, belatedly, that they were feeding exclusively on the few caddis that were hatching.  Why?  ??  ?????  Yeah, your guess is as good as mine.

In the end, what I've found is that big brook trout don't care that much about flies.  You'll catch fish in the 8"-14" range on bugs, but after that they want meat.  Crayfish, sculpins, your mothers gallbladder.  It's funny, but that fish I caught last week was not an anomaly.  They actually become more vulnerable to Big Ugly as they get older and bigger.  While browns are the fly connoisseurs, brook trout don't sip.  They gulp and glug.  I caught a ten inch brookie on the Rapid River about 6 years ago and noticed he had a twig sticking out of his mouth.  I pulled the "twig" out and found out it was attached to the half-digested body of a mouse.  A TEN INCH brook trout ate a mouse.  Makes you think, don't it.

What brook trout want, is respect.  You have to be quiet, cautious, accurate and direct.  Flub the presentation and you're done.  Line them on a clear day- move on to the next hole.  While last weeks fish was a personal best, I've caught a lot of 14 inch fish, and learned a lot of lessons.  One fly for brook trout? That orange Chernobyl.  Two?  A Joe's Hopper.  Three? A skunk. Four? A sculpin of your choice.  I'm not fishing for tiddlers.  After that? A stimulator, a size 12 elk hair caddis, and soft hackles.

Posted by Fontinalis Rising at 11:14 AM