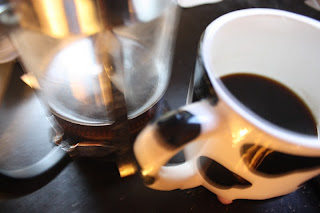 After being gone from home four weekends in a row, I had to settle in and get some work done, including yesterday.  I did a car spot for Phil Friday on the Boyne River, and despite there being salmon present, I did not bring my gear.  It still amazes me to see yard-long fish in such a shallow clear stream.  Sunday I made myself go back out on my local brook trout water and see what I could do.


The twist, is that I had contacted Michael Schmidt of Angler's Choice Flies some time back about getting some hopper patterns from him for an article I had in the works.  Mike went on a big trip to Alaska, and I did my Nipigon trip, but when I returned home from Detroit last week, I found an envelope in the mail with half a dozen flies in it.  With no real hatches happening, terrestrial is the only way to go right now, and the brook trout are feeding, trying to get ready for fall spawning.  Mike's flies didn't disappoint, and I had a rise on the very first cast. I managed to catch a couple of fish which was gratifying.  When I reached a very large beaver dam I had to change it up a bit.  It held fish, but they were very line shy, and not inclined toward naturals at all. That orange/black Chernobyl ended up producing.  I only caught a half-dozen fish, but with clear skies, very low and clear water, high wind and spooky fish, I counted the day as a success.

One thing I want to say about Angler's Choice Flies- Mike Schmidt is one of the best contemporary tiers out there.  He does it all, but his specialty is streamers, and his streamers are incredible.  Mike definitely has a style.  His streamers hit all the buttons, and if you're after big trout you need to check his website out and order some flies.  He has everything from classics, to modern patterns by Senyo and Galloup, to his own original creations which are on par with anything out there.  Check it out, get some.  Mike also has a blog that cover's his tying and fishing that I think you'll enjoy, if you're not following it already. 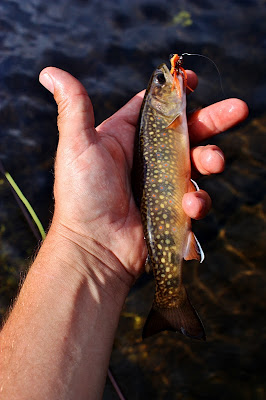 As I write this we're receiving our first big rain of the fall season, which will push the salmon into the rivers big-time.  I may have to head out this evening and see what I can find.  I also have to put together my September piece for my Angler's Year series, so I'll try to get that up this week.  I hope you all have a great week.

Let's get after it.
Posted by Fontinalis Rising at 4:47 AM