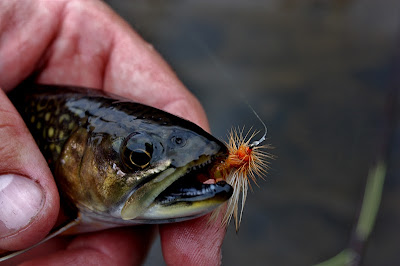 I've driven nearly an hour under gray looming skies, first down the highway, then the expressway.  Now I'm beating down a very familiar dirt road, deep in the back country.  This is a pilgrimage of sorts, in a couple of different ways- I'm headed to my favorite stretch of water in Trout Country, and it's the second to last day of the trout season here.  I had intended to fish the last day of the season Friday, but the weather man says otherwise, with high winds and rain predicted..  When I pull up to the access I'm gratified to see the lot empty- exactly what I expected on a Thursday afternoon in late September.  It's been one of those weeks, and when I had gotten to town I realized I had left all my fly boxes behind, and so I ran to the local party store/ outdoor gear purveyor.  They sell flies for 99 cents apiece.  I get tired of buying flies when I have boxes full of them and a vise, so I limit my purchase to just five- two stimulators, one Chernobyl, and two elk-hair caddis.  At the river I suit up, put my rod together, lock the truck and wade in. 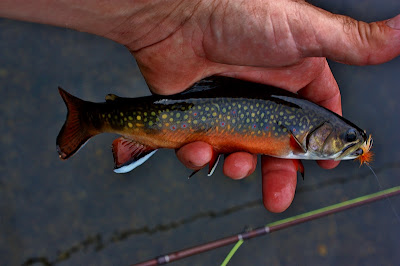 Where does a season go?  Where did summer go?  What happened?  I think back to all the plans I'd had for this year.  I did manage to reach some goals, certainly had a lot of firsts and personal bests this year, so I guess I can't complain.  But where did the trout season go?  How did the entire thing transpire, so that now I'm blowing off work, to squeeze in a couple of hours on my favorite water ahead of the gale?  A lot has happened.  Goodness it was a busy year.  I accomplished a lot.  I fished for smallmouth and carp on the fly for the first time, successfully I might add.  I caught my personal best brown and brookies.  I got to try new gear, and added a new rod to the quiver.  I finally got what resembles a double-haul down.

There's a lot I didn't do.  I never did make it down to my favorite stretch of the Manistee to hopper fish.  I didn't get to try any of the UP water I had wanted to get to. I didn't night fish enough.  I know you won't feel sorry for me, but it feels like I didn't get to fish enough period, like I I let the whole thing get away, a summer squandered.

I wade up past the first bend to the first spot that usually holds a couple of fish.  I'm using an olive stimulator.  On the second cast a splashy take announces the first fish of the day.  These brook trout are feeding heavily now, trying to bulk up ahead of the November spawning season.  I bring this fish in, it's colors flashing fluorescent orange off-set by black and deep green.  Two casts later another rise, but within seconds the fish comes off.  I pull in my line to find that my knot has come unraveled.  That leaves  four flies in the box.  I tie on the other stimulator and keep fishing.

I won't bore you with every detail of the day.  I caught a dozen or so fish, but it wasn't epic.  I always see big fish in this stretch, but none show themselves this day.  I don't land anything over ten inches.  What the fish lack in size and numbers they make up for in color and attitude, slashing at my flies, jumping when hooked and flashing those amazing colors.  A couple of the fish look ordinary, but most are painted up better than any artist could.  Some are so black and orange they look fake.  In another day they'll have the rest year off from bothersome fisherman, til next spring when this starts again.  I can't complain really- there's still water that's open to fishing, the salmon runs are going strong, the steelhead fishing will just improve for the next couple of months, and stripping streamers for lake run browns is just heating up.  But the last time that you're able to head to your favorite stream, catch these beautiful little jewels, stand alone in silence far out in the wild, fly rod in hand, knowing that another season has come and gone- it fills me with a sadness.  It's not just this day, or even this season.  It's the flowing of time, the knowledge that it won't stop for anything.  It's a sense of loss, another season gone.  I have good memories, but large parts of it are blank, and I'm struggling to remember what happened.  Did I fish at all in July?

I fish for almost three hours before the rain starts.  At the last hole, with rain falling steadily, an almost imperceptible swirl announces the big fish of the day, all of ten inches.  He's hooked in the belly, not exactly how I want to end the season.  But it's raining hard now, and it is a long walk out- time to go.  I manage to land one more fish on the way out, with colors so bright it almost hurts to look at him.  When I reach my truck I stow my gear, turn the heater on, and head home in the gathering dusk and storm.  I'll return next season and start this story all over again.

Posted by Fontinalis Rising at 6:06 AM