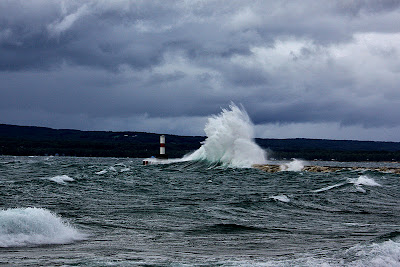 The wind is blowing a howling gale that has raged for four days now.  In town the bay is open to the full onslaught of the west wind.  Waves formed across 100 miles of open water grow in size and volume, until they pile up 6, then 10, even 20 feet or more, then explode against the breakwall that protects the harbor, throwing spray up to 60 feet in the air.  To stand there at the foot of the wall, lean into this wind and feel the ground shake from the pounding of these waves inspires awe, and fear.

October marks one of the year's greatest transitions.  It starts with plenty of decent weather, and the leaves are still on, though starting to change color fast.  By the time it's over, the trees will be stark and bare, and most years here in Trout Country we'll have seen our first bit of snow before it's over.  Nothing permanent, but definitely a shot across our bow.  The deer get more and more restless, the beechnuts drop, the last of the apples ripen and fall, the grass slowly fades to that whiter shade of tan. 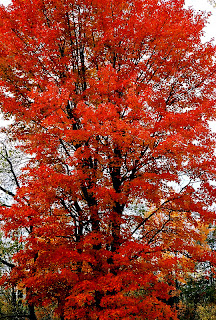 It is a time of great transition for the angler as well- the general trout season here in Michigan is over.  The salmon are still in the rivers, and some will still be chrome bright, but most will have blackened, grown moldy, then died.  By late October only the bright gravel ovals will be there to remind you of the schools of huge fish that drew anglers to the rivers in droves.  By late October, the fall streamer bite for steelhead and browns starts in earnest, a welcome change in my opinion, both from the brutish kings, and from the gentle dry fly season.  I like being able to cast with authority- you want that fly to slap the water.  Sure, you're going for accuracy, but delicacy in casting is not a prerogative. And nothing- nothing- matches the sight of a two foot long brown or even longer steelhead making a swing for your fly.  You don't have to catch fish streamer fishing (though it is nice)- just seeing one of those fish chase your fly will make your heart pound for the rest of the day.  It's the only part of this sport where not catching a fish can still make your season.


October is fall color season.  The colors that started in September very quickly build, until every hillside is ablaze in yellow and orange, bright scarlet, even purple.  They start at the high and low elevations and meet in the middle, like a match lit at both ends.  The first leaves to drop are here on the river and around the lakes.  In a single week, the maples turn scarlet, then drop their leaves suddenly.  I've never understood this.  At higher elevations (and here in Michigan 400 feet can make a big difference) the leaves change just as fast, but seem to hang on longer.  As soon as it peaks, in just a matter of days, the wind inevitably comes and strips the trees.  This leaf fall can be very problematic for the fly angler, as mats of fallen leaves drifting downstream can make fishing almost impossible, sometimes for more than a week.  I constantly hook-set into perceived weight, only to find that I've snagged more leaves.  It also loads the river with floating objects, and I believe it makes the fish more reluctant to bite- they seem to tire of inspecting every colorful object.  Once this onslaught of color and debris clears, the fishing improves markedly. 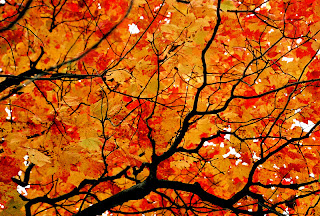 What is October to the fly angler?  It is bright colors on trees and fish, the smell of fresh fallen leaves, cooler water temperatures that get the fish feeding again.  It becomes stark bare trees and a return to monochrome, that first hard frost and snow, and the first bad gales that mark the change to winter weather.  It's the transition from dries and 5 weights, to streamers, eggs, chuck and duck, and heavier rods.  It is the transition from a gentler time and camaraderie, to one of fortitude and self-reliance.  It is a time of solitude on the river.  If you hit it wrong you'll find moldy fish, or high, leaf-filled water in a howling gale.  If you hit it right it marks some of the best fishing of the year.

Author's note:  since I started this post we've had three severe gale's in a week.  According to data recorded by NOAA buoys wave heights topped out near 20 feet.  And yes, the trees are bare.
Posted by Fontinalis Rising at 10:00 AM