One Bug Is Fake's 30 Days of Fishing- Week One 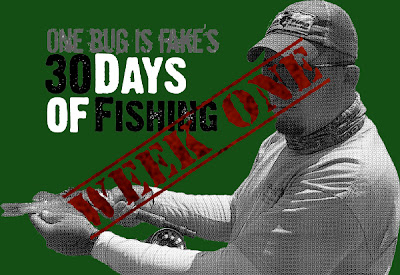 This whole idea almost went to crap on day one.  I bought a computer a while back and thankfully bought a warranty.  About two months ago, the computer quit charging and I had to take it in for repair.  They gave me a loaner as part of the warranty.  Flashing back to last week, they called on Thursday to say it was ready to pick up.  Crap.  I executed a command decision, and 86’d the exchange.  They can wait, the “Acid Pond” called to me like that nasty looking Chinese place you know you’re going to get food poisoning from someday, but still eat at. 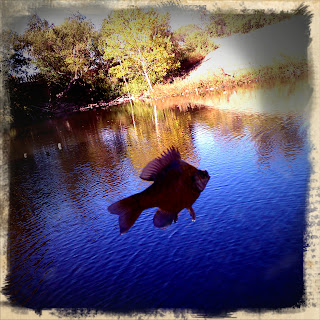 It isn’t the most glorious place; in fact, “downright hideous” is more apropos.  Fishing it is mostly like riding a moped, all fun and games until someone sees you doing it.  There is no room for pride here, this is guerilla fishing.  I am playing to win, it is very close to work, and I knew fishing there wouldn’t kick this whole shindig off with a skunk.  I get out there and it was dead for two solid hours.   I started sweating the failure, feeling like I had just asked a pregnant chick when she was due, only to find out she wasn’t expecting.  No fish at all on my first day out?  I was going to lose all my stream-cred!  It was a panic attack until 1600hrs on the nose, and then I hooked up four times in a row.  Thank freakin' geebus.  Day one total?  Two eight inch bass, two little sunnies (One bluegill, one tiny redear) and three tree limbs.  Somewhat begrudgingly, I resigned to the fact that the tree limbs don’t count, despite the masterfully executed hook-set into each one of them.

The next day, shaped up to be worse than the first, the procrastination caught up to me with one (kind of snotty) phone call about my computer.   It seemed a night fish was inevitable, and I was not looking forward to two hours of, “one more cast, and I’m going home.”   The next day was Saturday, I wanted rest before.  Luck prevailed, leaving me with seventy-five minutes to fish and a pond on my way back.  This particular pond claimed my F2; kick-starting the head-spinning and wallet-slaughtering, ‘Summer of Broken Rods’.  Yet, here I was again, on the other end of summer… With another glass rod.  Fishing it was an exercise in patience, but the catching was decent, adding a fourth species to the list (Green Sunfish).  Even though I avoided the night fish, I face-planted into a lack of sleep, finally passing out late enough that MTV was actually playing music videos. 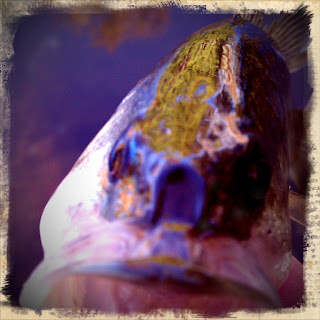 Sparing the mundane details; I woke up way late, had a gar decimate a carp fly, and brought a fifth species (Guadalupe Bass) to hand.  I also hooked four carp and a poison-ivy rash seemed inevitable (it wasn’t).  The night came and a new stumbling block was installed.  A special thanks here to Matt and Owl, for unleashing ‘Stumbleupon’.  Bad news, very bad news.  Its hilarity is two-dimensional crack, an infinite time-suck, and has become the “Public Enemy #1” to this whole operation.  Moving on…  Texas’ longest and shortest seasons are locked in mortal combat at present, so even leaving at noon it was warm enough yet to wet wade, and there was plenty of fishing light left.  I bribed the Ex with the promise of free food, (and Cabela’s) and we were on the water soon after.  The result for the day included my personal best Cypress “Trout”, and species numero seis: smallmouth, two of them to be exact.  The Ex sight cast to a 20”+ rainbow with a personal creation, and nailed it.  Good for her, I was proud.  (Plus I caught more, so I won that internal contest.) 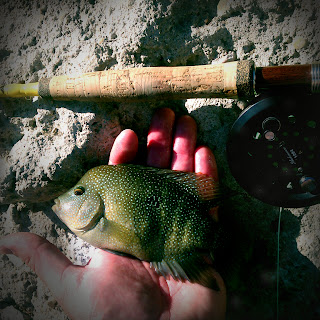 Monday wasn’t a skunk, but I didn’t add anything new.  Tuesday however, I drove up to Brushy Creek and pulled in a seventh (and most surprising) species.  With the cooler temps poking around like a nosey neighbor, I had assumed all the Rio Grande Cichlids had holed up for the winter, as they usually are the first to do so.  Imagine my excitement when I nailed one on a Moorish’s Small Fry (also rare, in my experience)!  Yesterday was amazing, after watching live video-feed of a dam removal in Washington State; I almost missed my window, leaving me only the “Acid Pond” to fish.  It turned out to be the highest number day so far, with me losing count at around 15 small bass to hand.

That’s a week of fishing, in a slightly hurried nutshell.  Initially, I thought the fishing might wear me down.  Instead I am afraid it is going to be time management that will do me in, if anything.  I have to be careful with that.   Stumbleupon is lurking in the shadows, ready to snare me every time I crack the laptop, but I know it’s there, and knowledge is half the battle, right?  Speaking in terms of non-fishing factors, I really wasn’t prepared for the added stress of blogging about the thirty days either... It isn’t easy when it takes you seven days or more to write about one trip, to suddenly write about seven trips in one week.  If Vegas is keeping odds, I have another variable added recently, there might be a trip to Tulsa in the mix this coming week, although I’m fairly certain I can cram the required hours in.  All in all I feel good, yet reserved.  Seven days is a start, but I have done that without noticing before.  I shouldn’t start chest-thumping quite yet.

Don’t forget to vote, FR has streamlined the procedure so there is no excuse!  I’ll be back in a week, until then…  See you downstream!

Editor's note:  Don't forget to enter the OBIF 30 Days of Fishing contest.  At stake are an OBIF T-shirt and a Morrell fly box.  You can read the revised contest rules in the next post down, or just freakin' enter already- the entry form is there at the top right sidebar if you missed it.  ~JT/FR


Original Post: One Bug is Fake- 30 Days of Fishing

And make sure you check out Brandon's site to read other great posts, relive Twitter history, and browse the OBIF swag.

Posted by Fontinalis Rising at 3:18 AM