One Bug Is Fake- The Rules Have Changed

Okay- I hear what you're saying.  Not Fair!!!  Last week Brandon Robinson announced a quest to fish for 30 days straight and give you a chance to win a T-shirt.  To be honest, we haven't gotten a lot of entries.  We both have day jobs and aren't professional contest designers, and a few holes in our plan became clear.  For one thing, the way we had it set up there was no guaranteed winner, which is no fun.  Plus, the entry process was too complicated. 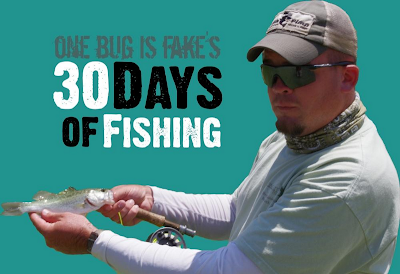 What I've done is simplified the rules and the entry process.  To enter, just go to the sidebar and fill out the form.  Go ahead, it's right there.  You can see it now.  The next change, is that at the end we will draw from one of two pools.  If you think Brandon will complete his quest, vote yes in the form and be done with it.  Thanks for rooting for him.  If you think he's too lazy, know about an impending plague, or just don't think he's up to the challenge and you want to bet against him, vote no, then enter the date you think he'll fail by.  By the way- All existing entries are still valid.

Here's where it gets interesting.  I've decided to add a bonus prize to the T-shirt that Brandon is giving away. It's a Large Morell fly box.  Who doesn't need that? (if you don't fish give it to the angler you love- you do love an angler don't you?).

If you voted for Brandon (yes) and he succeeds, whoever gets drawn will get the shirt plus the bonus.  If for whatever reason you've voted against Brandon and he fails, the person who guessed his fail date correctly will win the T-shirt and the bonus.  If multiple people guess his fail date correctly, I'll do a drawing.  If no one gets the date right, I'll draw from everyone who bet against him and someone will get the shirt.

Got it?  Go, fill out the form, and don't forget, Brandon will be posting his progress here each Thursday until November 18th; look for his next post tomorrow!

Make sure you check out his site- http://onebugisfake.com/
Posted by Fontinalis Rising at 8:10 AM

Email ThisBlogThis!Share to TwitterShare to FacebookShare to Pinterest
Labels: free T-shirt, I hope I win, Morrell fly box, One Bug Is Fake, what do these tags do anyways