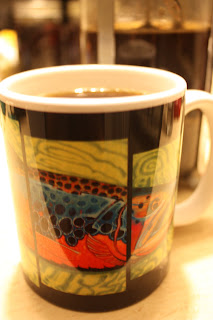 Aaaaaaaaagghhhhhcckckc-thewww!!!!  Yawn, stretch, scratch, repeat.  Hey, you try and come up with a new wake up sound each week.  I'm going to pass over my staling Sumatra beans for the Morning Joe, and I'm still with the DeYoung mug.  Go click his link here and buy a set already, I like Derek.

You know, when you work right through the weekend, Monday doesn't mean to me what it does to you.  I'll be working today as well, finishing a job, then my weekend starts tomorrow, as I'll take to the woods with my bow and attempt to shoot a buck.  Normally I've started by now, but with record rainfall in October it has taken extra long for me to finish my outdoor work.  I have business to care for in Ann Arbor Thursday, which will take me away, so I guess I have about six days to get the job done.  I have been roughly 300% successful over the last 11 years (I've shot about 35 deer), so I'm not worried about whether I'll get the chance to shoot a deer.  Seeing how I've gotten my two best bucks two years in a row, the question this year, is at what point do I give in and shoot?  I'd like a big buck this year, but at some point you need some meat in the freezer, and all those little bucks wandering the woods get awfully tempting after awhile.  I passed up 8 bucks last year before taking my best ever.

I got out once last week to toss streamers for steelhead and browns, but only had one small fish, 12-14" chase.  The wading was scary, and the rain incessant.  I brought my camera, but under those conditions wasn't about to get it out, so I have no pictures to share.  I also lost a bunch of big streamers, including my best Stacked Blonde, and two of my good Cougars, so I definitely need to hit the vise this week and get some stuff punched out.

What to expect here at FR this week?  Well, there will, of course, be Brandon Robinson's update to his 30 Days of Fishing.  If you haven't entered to win a One Bug is Fake T-shirt AND a large Morrell fly box, why not?  Enter using the form in the top right sidebar.  The rules are here.  Other than that, it's going to be a hectic week for me, but I'll see what I can get up.  I do have two exciting interviews planned for this week, which I'll post as soon as possible, and I have a couple more planned as well.  I also have several reviews due out soon- I'm reviewing a book that I'm enjoying thoroughly, and I have an upcoming video review that I can't wait to get to.  Brandon's quest has me thinking of pursuing a quest of my own- 30 Days of Fly Tying, in which I'd give away the fruit of said days at the bench in a contest in the end.  I'm still toying with that idea.  I'm lazier than Brandon, and my flies reflect that.  I think that's why they catch fish.  I can say now, that the majority of fish I catch are on flies I tie, so there's something to be said for that.

Well, I'll keep this one short and Swedish.  Have a great week.
Posted by Fontinalis Rising at 6:46 AM