Brandon is back with his week two report, as the challenge gets even more interesting.  Remember, we're giving away an OBIF T-shirt and a large Morrell fly box, so be sure and enter the contest in the top right side-bar.  Contest rules are here. 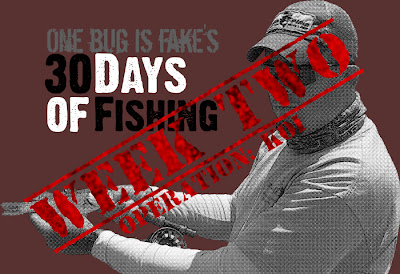 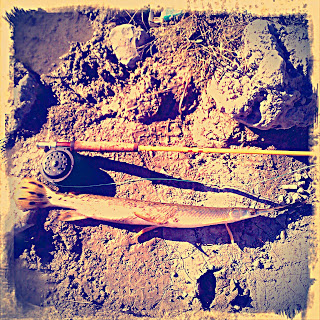 Actually, don’t.  In this version, I have become Capt. Ahab. The ‘white whale’ of my obsession is a very large and mostly white koi. Then again, it might be a gold fish, or an ornamental koi; I am honestly not certain.  What is certain is that it is lord and master of its domain; a dingy little pond adjacent to the ‘Acid Pond’.  We will call this pond the ‘Hobo Junction’ pond (mainly due to the three or four hobo living rooms I found in its circumference).  The pond is stomach shaped and fairly small; it is chock-full of playful medium sized bass.  But they pale in comparison to this fish, however.  The desire to catch this fish developed so fiercely that I actually considering ditching the contest!  The crisis was due to the self-imposed inability to fish the same pond two days in a row.  This fish must be caught, and I was willing to ditch the whole endeavor to it to hand.

Cooler heads prevailed however, talking me down from the ledge.  I would continue, as it would likely increase my chances to hook him.  It was also pointed out that I can cheat a little in my methods, since it is a fish-nomaly; providing of course it’s done on the Eagle Claw.  I have fished for it two days at a time, less the weekend, since I discovered the aquatic monster.   Ōkina Sakana (Japanese for Big Fish) has pulled me from deep slumbers into cold sweats, simply by the knowledge it exists.  I have been supremely unsuccessful at fishing for him.  It is proving to be the cagiest fish I have ever pursued, and I am not convinced witchcraft isn’t involved.  This fish is as equally frustrating as, “Not tonight honey, I have a headache…”

Hours have been spent, both fishing and evaluating its behavior, trying to find a chink in the armor.  Over thinking it, I know…  I tend to do that frequently.  Just ask any ex of mine, they will emphatically support the evaluation.  It’s in my nature I suppose, yet this situation calls for disproportionate contemplation.  It knows when I show up and swims over to me.  As soon as I begin casting, it leaves.  Add that approach to the fact that it’s the hobo-junction pond; one can only assume that someone feeds it. It muds like a regular carp but shies away from any fly, or (more likely) any presentation I can achieve surrounded by an entire landscape scientifically engineered for perpetual fly-lossage.  This obsession has essentially, consumed week two. 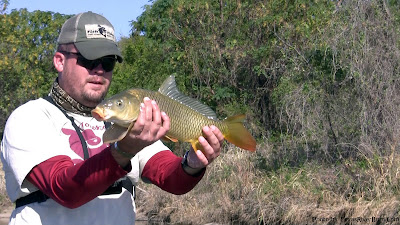 Moving past the koi, I did catch a common carp, which you can read about here. You can also add Longnosed Gar to the catch-list as well, pulling that off on Saturday.  These bring the total caught species to nine fish.  After the carp, I landed a little red-breasted sunfish; that’s ten, baby!  Let’s not point out that I have fished skunk free for thirteen days in a row, scratch that crap, that’s a personal best!  Assuming this (bone-dry) cold front doesn’t screw things up for me, or the fact that I just called attention to my streak, the fishing should only improve now that fall is actually here.  Unrelated, I have run out of fluorocarbon leaders and the local storefront doesn’t sell them (read: I’m nail-knotting my tippet into a leader).  That variable should affect the Vegas odds slightly.  Lastly, I think I caught a Spotted Bass.  I say think because I have never heard of a pond-dwelling Guadalupe Bass, but it looked similar.  I snapped a picture, but it was a case of extreme camera fail and I didn’t want to kill the little guy waiting on it to quit acting stupid.  So, I am going to call it 10.5 species. 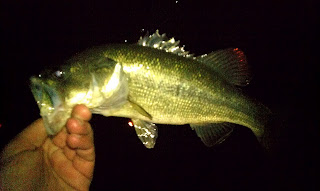 Now, can I brag a little bit?  Texasriverbum.com made a video!  Why is that cool?  Well, because I am in it! Okay, that part really isn’t that cool. The only thing I can take credit for is my part in it, all the editing and such was done by le Bum himself.  I will own up to a couple of things though, before you watch it…
1)      My backcast is too fast.  Blame the heavy streamers I fish for that bad habit, I didn’t even know I was doing it.
2)      I screwed the name of this wonderful website up so badly, he couldn’t use it.  I am asking for Rosetta Stone Latin for Christmas.
3)      I was nervous.  Cameras with people behind them make me a little nervous freaking basket case.
There, another week down.  I have a mission within the mission, so the pressure is on a little bit.  If I do catch the Ōkina Sakana, I will add five hand-tied *bass flies to the prize pot. To recap we have: magic koi, no leader, koi/angler cage-fight, ten species, white whales, extra prize, magic koi, and cool video...  Are ye not entertained?!?

*Disclaimer: I kind of suck at tying flies.  They do catch fish though, I promise.

Make sure you check out Brandon's site-

One Bug Is Fake onebugisfake.com


Posted by Fontinalis Rising at 2:30 AM