One Bug is Fake's 30 Days of Fishing- Week Three

In what may be his best installment yet, Brandon Robinson shares the mind crushing horror that is- 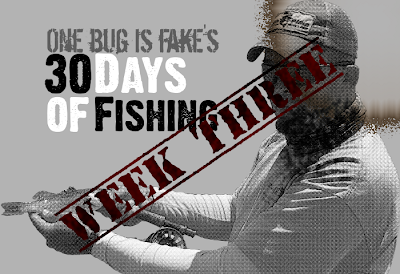 I thought inbreds were dumb.  You hear the term inbreeding, and it conjures up images of big-headed little kids, with snot-crusted bubble-blowing noses, bare feet and lice ridden heads.  Their intelligence level rates somewhere between; a plate of chicken that’s been in the back of the fridge since the Clinton administration, and an amoeba.  This specialty koi/carp/goldfish, while probably inbred, defies the stereotype.  It is one of the smartest fish I have ever fished for.  Ever.  It’s smart enough to have me doubting my fishing ability entirely.  That isn’t saying much, but it is still frustrating. This fish isn’t like any other either.  It plays mind games.  Jedi-freaking Spock mind games…  (Somewhere, a fanboy just committed suicide because of that comparison.  Moment of silence begins now… … … …).  Seriously though, he will swim right up to my fly.  At the point that I think he is going to take it, he will turn to FACE me and then swim off with an indignant swish of his majestic flowing tail.  I hate him.   I hate him so much. 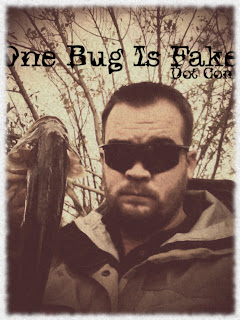 I might as well call this the “week of second guessing” too.  That is what I have done all week.  I have called myself every synonym of stupid I can think of.  I have lost my cast, found it, second guessed it, and lost it again.  I have cursed myself for choosing a BANANA-YELLOW fly rod for a mission where stealth, is critical.  I have a plan, though; giving up is not an option.  If I don’t get smiled upon by Neptune himself and catch this water stallion before this contest is over, I am going to take a sick day.  I will buy a ghille suit, smear camo paint all over my face and fly rod, and go full-on Long Trang on that piscadevil.  I will bring that fish to hand.  Okay, it won’t be a sick day, but it will happen.  Mark.  My.  Words.

Last week, I made mention of my catch-streak.  Totally called it, by the way.  The day that post went out, I caught a big ol’ polecat.  That’s a skunk to the uninitiated.  It’s happened twice since the self-fulfilling prophecy.  I blame the koi, and his little (newly discovered) little brother.  It’s their fault.  I have: chummed with bread, thrown every carp fly, changed leaders, tied on a steelhead leader with an extra four feet of tippet, bought (and tried) more carp flies,  stepped up the size of the tippet, scaled the size back down, lost the first set of flies in every conceivable manner, and considered quitting fly fishing altogether.  I mean, I am constantly surprised at the tensile strength of the tiniest freaking tip of the tiniest freaking weed. 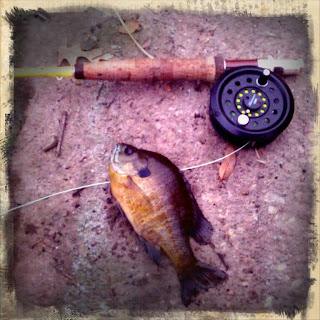 Enough about that fish, you want to hear how the rest of the quest is going, right?  The weather is turning colder just a bit earlier than it did last year, but I should be able to hold the waders off till after this contest is over.  I skunked out on trout, and I almost missed a day.  Saturday, I went to help a friend.  I got a late start to begin with, and was late getting to his house.  After doing the repair he needed, I went to the Orvis store to amputate my wallet.  That’s where I almost lost the contest.  I got sidetracked at the selection of flies, and I was contemplating buying something with leather elbow patches, when I realized I was almost out of daylight.  I had more than an hour, but only if I could find somewhere close.  Add another half-a-point to the species list (11 for those playing the home game) for my Copper-Nose Bluegill that was caught behind the newly opened Orvis store.
This is crunch time.  One week left, it is do-or-die.  My fridge is empty, I have been getting almost all my meals from a drive through.  My fly tying desk looks like I tried to real-life play angry birds, then angry squirrels, then angry bunnies, then angry Hobby Lobby customers.  I would also like to apologize for this post.  It’s distracting, scatter-brained, and a little played out.  Actually, I take that back, it’s a perfect representation.  This quest has taken its toll, and work has been uber-frustrating this week. 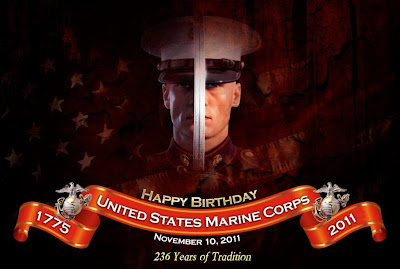 That said…  Brandy Smith, Levi Green, Magnolia Sexton, Ken Hacker, James Schmidt, Lisa Brubaker, Shelley Montgomery, Mark Hardin, LCpl Manning, John Michael Gavit, Cass Winslow, Kirk Ryan, and the rest of the Corps (Old and New); Happy 236th Birthday, Marines!  Tomorrow is Veterans Day, remember to actively seek out and  thank a veteran.  It is more than just a random pre-Black Friday day off, take a second and show some respect to the people that chose to either serve for you, or chose to serve with you.  Veterans, thank you for your service.  I hope you are taking full advantage of the only Federal Holiday you actually earned.  I will be chasing carp on the Pedernales River while humming a Charlie Robison tune.  See you downstream!

Ok, Brandon is entering the home stretch here- next Thursday is his final day of fishing and next Tuesday is the final day to enter the contest.  If you haven't already, enter in the top right side bar.  You're entering to win a OBIF T-shirt and a large Morrell fly box.  The rules are here.


Make sure you check out Brandon's site onebugisfake.com

Posted by Fontinalis Rising at 3:46 AM