One Bug is Fake's 30 Days of Fishing- The Grand Finale

As you all know, Brandon Robinson, that guerrilla blogger aka One Bug Is Fake challenged himself to fish for 30 days straight and post about it here on Fontinalis Rising.  I tried to fish for a week straight back in June and failed.  The 30 days are up.  Did he make it?  I'll let him tell the tale. 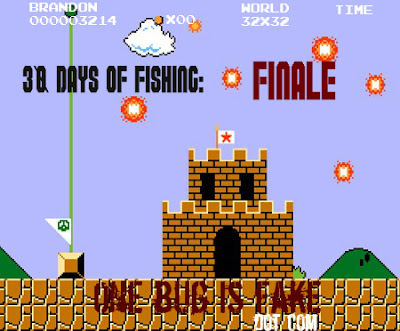 It was day 29, and my Jeep broke in a catastrophic fashion.  The clutch just died.  “Of course,” I thought to myself (I’ll omit the expletives used), “I just had FR (Jason) go ahead and pick a winner and, I'm planning on camping out on trout water for the grand finale.”  That’s what I get for voicing my intentions.  “They” heard it and unleashed the gremlins to infect my weekend, ruining my 30th day.

You know who “They” are… “They” are the ones that play sad songs on the radio when you want something to lift your mood.  “They” also make the TV kick out food commercials when you’re hungry.  “They” give you food poisoning the first day of a long-awaited vacation.  You know who “They” are now, right?  Yeah, those guys suck.  I was braced for a full on attack from the gremlins, trying to outwit “Them” and get to the water by almost any means.  I put the call out on Twitter, having access to a dozen or so Austin-area Anglers through that medium.  I also placed several desperate calls, looking for a ride to the water.

Nothing.  Well, my friend Shawn did offer up a truck.  Appreciative as I was, the idea of taking someone’s truck made me a nervous wreck.  The gremlins were on my scent already; all I needed was to wreck a buddy’s truck to really make the weekend.

I called FR, trying to brace him for the probable defeat and embarrassment, since we had already picked a winner with the assurance it would be a coast to the finish line.  He expressed his confusion, and we counted, carried the two, and discovered…
Day 29 was actually day 30!  Holy crap on a cracker!  I did it!  Suddenly, the huge catastrophe was reduced to a minor nuisance.  I had already succeeded!  HA!  The very next thought was predictably, about still going fishing.  Not because I had to anymore, but because I wanted too.  Besides, what else is the weekend for?  Being an adult?  Pu-shaw, that’s what the week is for.

The Week in Review (and then some):

The last week was almost as species prolific as the first one.  I took the Ex out to try and put her on a carp, (keep an eye on this site for a future post about her version) and instead I added three new species in about 20 minutes.  Drum, Longear, and Channel Cat.  If my numbers are correct, that makes 14 mouth-hooked species (I did foul-hook a shiner, but it wasn’t legal…).  I really wanted to add a trout but the clock ran out.  Technically, I fished 32 days in a row, as I did manage to fish Saturday and Sunday, despite the Jeep issue.  Thankfully the Jeep finally was fixed after 2 trips to the shop.  A new friend was made, (Travis Brown is his name) and it looks like it might work out.  Travis volunteered when I called the Fly Shop during “Trout Day” to see if anyone could save me from the crappy waiting area at Firestone.  Side note: If the shop you are taking your vehicle to has a really comfortable waiting area; they are horrible mechanics.  It’s a rule.  Travis and I also went fishing Sunday.  Ha!  I also bought a pipe, corn-cob (because it was the cheapest), and the rest of the accoutrement that goes with.  Don’t ask why, I don’t have an answer; I just did it.  I’m smoking it now and I pull it off, like a boss.  The jealousy line begins to my left, people. 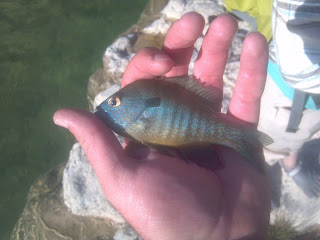 You know what two biggest challenges were?  One was having to fish.  The weekends were a breeze; again, what else are you supposed to do on a weekend?  Conversely, the weekdays could be ridiculously hard: grades had to be turned in, groceries needed to be bought, hairs needed to be cut, flies needed to be tied, and blogs needed to be written.  Sometimes, you just want to go see a movie.  I have a backlog of guest posts that need to be written, groceries have amounted to fast food, and I am starting to look like a hippy.  Yes, it is partially because of No-Shave November, but the hair on top of my head is even worse.  Wait… Scraggly hair, beard, and corn-cob pipe?  I bet I look a cross between a moonshiner and an extra from Outlaw Josey Wales. “We-uns gots possum stewin’ if-n ya’ll is hungry.”   The second part, I had to write about each week.  No matter how boring it was, or how tired I happened to be.  As a new writer, it was both challenging and upsetting.  I felt like every post was rushed and therefore, horrendous.  (Special thanks to FR and Fly Fishilicious for putting up with my constant self-doubting; it couldn’t have been easy.) 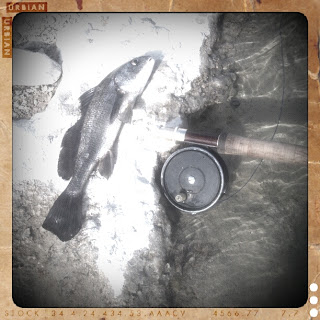 Overall though, this experience was a lot of fun.  My cast improved some, and loops have been tightened.  While that has been helpful in catching fish, it also opened up a proverbial cavalcade of new casting issues to work through.

CONGRATULATIONS TO: Howard Levett, CoFisher, or This Guy.  They are all the same person and they all won a large Morell Fly Box and an OBIF t-shirt of their choosing.  In all seriousness, this guy was one of the first to start commenting on all my posts.  Now, I know he is just probably a fan of the blogs I post on, but it is still nice to always see his comments.  I am sincerely glad he won.
SPECIAL THANKS:  Dylan Owens, Amanda Fowler, and Shawn Bischel; for fishing with me, a lot.  Emily Blankenship (The River Damsel) and Theresa Cross; for asking almost every day, “What day are you on?  How is it going?”  Chase Hundley, Fly Fishilicious, and The Functioning Fishaholic, for retweeting, liking, or +1ing every mention of this contest.  Cameron Mortenson; for using your reach and prolific influence to spread the word, as well as encouraging me all along the way. Texas River Bum; for filming, editing, and showcasing a video about a contest hosted on a whole other website.  Finally, thank you FR for giving this personal goal of mine a home.  When this started, you were a stranger.  Now I count you amongst the too few that I call my friends. 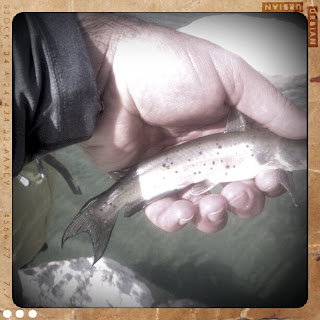 Just in case you were wondering, I didn’t catch the Koi.  I haven’t forgotten about it, but I AM hoping that jerk forgets about me.  I promise, if I do nail the bastard, you’ll read about it here. 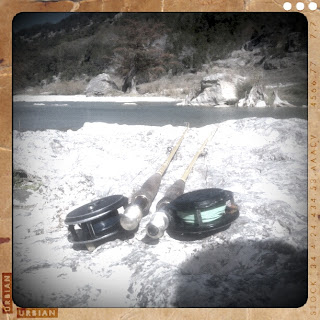 Posted by Fontinalis Rising at 3:16 PM