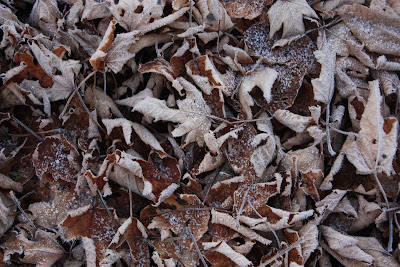 I've been sitting here in my tree for two hours now, my frustration increasing by the moment.  I've had no time to hunt this year, little time to practice my archery, and I've hurriedly thrown my gear together this morning, then spent two hours driving around trying to find the broadheads I like.  I must have misplaced mine when I moved last month.  At nearly $50 for three of them, plus about $13 per arrow, that means I'm flipping over $28 into the woods every time I squeeze the trigger, and no, it's not always re-usable.  I went to one of my better spots only to find someone parked there (I know who you are- see if I ever ask you to help me drag a big buck out again.), then went to another spot on state land I know of where a dozen trails converge.  I got all the way up my tree, only to realize that the wind is roaring, and shaking my tree hard enough to make me doubt I can stand, much less shoot.  Add to that the fact that I've chosen to climb an ash tree in a forest ravaged by emerald ash borers.  There's downed trees everywhere, and the broken top of my tree  lodged at eye level in the tree next to me is not reassuring.

For the next two hours I watch the empty woods, save for a lone fox squirrel foraging beech nuts.  I'm relatively warm and comfortable in my climbing tree stand, but the howling wind makes it impossible to hear anything else, and the blowing leaves and limbs makes it almost impossible to spot anything if a deer does decide to come through.  Now the failing light has turned everything that dull November monochrome, the wind is still blowing, I have a total of three arrows, and doubt I'd be able to see anything in the growing gloom anyhow.  I've forgotten my GPS today, and I'm hunting in a stretch of woods I've gotten lost in with GPS, so I'm starting to formulate an exit strategy.

That's when I look to my right and see her- a decent sized doe, 80 yards out and coming my way.  Why can I see her so clearly?  A second doe trails her.  When I'm sure they're not looking, I stand and attach my release to the string.  I ranged several trees in all directions from my position when I first got settled, and I start picking shooting lanes, trying to decide which to use, at which point to shoot, decide what my options are.  I haven't practiced nearly enough- I try to shoot at least 30 minutes a day in the months leading up to the season, but haven't nearly shot that much this year, and I feel a little rusty.  I mentally run through my shot, from stance to release to follow-through.  I've decided to not take the shot directly in front of me as the doe will be slightly angled toward me.  If I wait until she reaches the logging road to my left I'll have a clean broadside shot.  Being left-handed, this will require me to turn my whole body.  The deer are directly ahead of me now, but the wind is covering any sound, and when they are both looking away, I turn left, then make sure my left leg is against my seat to ward off vertigo while I'm aiming.  I seem to get vertigo in this gray light and wind if I'm not touching something- not a good thing when you're 30 feet up a tree.

These deer are relaxed and unhurried, ideal for taking a shot, but it still makes me impatient.  The moment finally comes.  She has reached the edge of the logging road and stops.  I come to full draw. The doe is at 25 yards out and broadside, which is third pin.  I try to clear my mind and release, but instead of releasing, I push my hand forward, essentially letting off.  Nuts.  I've fought target panic for years, quite successfully, so to have this vestige of it return now is frustrating.  It's a sign of my lack of practice.  The doe has neither seen nor heard a thing and still stands there, so I draw again.  This time I settle my pin, hold for a moment and release.  There's a satisfying whack and the doe leaps in the air, runs 15 yards then stops, looking behind her.  How did I miss such a chip shot?  At first I still think I got her and expect her to fall over right then and there, but she stands, looking back to where my arrow impacted into the ground.  She has no idea what happened.  I remove another arrow from my quiver and draw again.  She ran at an angle and now stands five yards behind a large beech tree I ranged at 27 yards.  This may seem to be an awkward distance to shoot when I've already missed at 25 yards, but what I know is that I never fully dialed in my bottom pin, and it's dead on at 32 yards.  I settle the pin tight to her shoulder and focus on a smoother release.

As it flies I get the mental image of an arrow in clean flight.  In archery, there's shots you wonder about and there's shots you're certain of.  This time the solid whack of the arrow hitting its target is clear, but the doe's reaction is even clearer- she ducks her head, tail clamped tight and lights out on a death run.  Both deer run to the next ravine, only one runs out.  I know I've got her.

Because of the failing light and my lack of GPS I make the decision to climb down immediately.  I go and examine the area the doe was standing when I shot her, but can't find anything, and so I gather my gear,  load up and walk out.  I actually make it back to my truck without turning on my headlamp.  Now I have another decision to make- do I make the 30 minute drive home, get my GPS and buy some propane for my lantern (another oversight) and head back to find her, or do I leave her lay overnight?  The area is infested with coyotes, so I'm taking a considerable risk.

I decide to take the chance and leave her.  I don't have anyone to call for help tonight, this area is very confusing at night even with GPS (the trees tend to block a clear signal), and despite the doe's body language when hit, I want to be sure she's dead.

Saturday morning I wake up bright and early, eat a good breakfast, load what I'll need for the retrieval and head back.  I spook five deer in the vicinity of my tree.  It takes a matter of minutes to find the first arrow- it's clean, a complete miss.  Whatever.  I then walk to where she was standing for the second shot.  I can clearly see where the two deer ran, but don't find any blood or hair.  I actually spent a couple of minutes looking for the second arrow in the ground.  Did I miss?  I replay the scene in my mind- no I got her.  I head toward the ravine in the general direction the deer have gone, circling for a blood trail.  No sooner do I reach the edge of the ravine I spot white and brown hair, 15 yards away.  She never made it to the ravine.  As a matter of fact, she only made it about 60 yards.  I'll bet she died in less than 10 seconds.  My coyote fears prove well-founded.  They've torn a dinner plate patch of hair off of her belly, but for some reason that's as far as they got.  It makes me wonder- did they get run off by another deer, a buck perhaps, or had they just found her right before I did and ran off at my approach?  Hard to say.  The presence of ravens in the area tells me it was probably the latter.

It takes me less than thirty minutes to field dress her, maybe another 30 to drag her out and load her.  I'm home before noon.  I've hunted a total of two and a half hours this year, and have enough venison to get me by.  I'm happy with that.


Posted by Fontinalis Rising at 9:07 AM