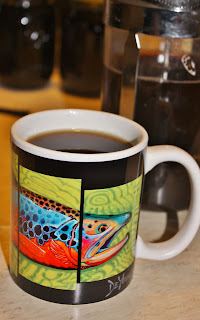 Uh-oh, FR is late with the coffee.  I have an excuse though.  I've been watching Whale Wars on Netflix and stayed up too late and thus slept in.  Excitement, made up drama, high speed chases with full size ships- this show has it all.  I love whales and dolphins as much as anyone, but to see these starry eyed vigilantes harassing the Japanese whalers while putting themselves in harms way due to their own ineptitude is priceless.  Man I've got to get a life.

Well, while you all were moaning and rubbing your turkey stuffed paunches last week, I found a piece of brook trout water that is still open and tossed streamers for the afternoon.  I didn't land any, but it was nice to see some decent fish smash and grab.  The roads in the back country were terrible after the deer season and some epic rains, so taking the back way home turned out to be a major mistake.  I spent most of the weekend smoking venison jerky, tying flies and cleaning house (smoking jerky keeps you home bound like nothing else) but Sunday I got out for a couple of hours for steelhead on a tiny stream close to home, and lo and behold I managed to hook a hot one that quickly broke me off.  No worries.  I know where he lives.


It's tempting to head right back out today, I have a light work load this week.  With December right around the corner, I'll try to get the next piece in my Angler's Year series together and up; I have several reviews pending and so I'll try to finish at least one, and having turned almost all my my deer into jerky, I'll probably hit the woods again once the archery season resumes December 1.  In case you missed it, I did post an entry for the OBN/Sportsman's Channel writing contest- it's kind of long and no pictures, but if you want to escape to the Montana wilderness with me on horseback go check it out. I'm going to spend at least one long day on the water this week on my favorite steelhead stream- I really want to land one this fall before the winter makes it tough, and I have jerky by the pound to take with me.  I have this fantastic jerky recipe passed on to me by my friend Terry.  It's like eating meat candy. 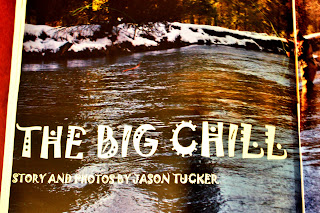 I was really pleased to get my latest copy of The Cedar Sweeper magazine in the mail.  It has my latest article in it.  The Cedar Sweeper is a small publication about Michigan fly fishing, and I'm really happy to be a part of it.  If you're from Michigan, look for it in your local fly shop, or you can subscribe at thecedarsweeper.com.  Blogging is cool and all, but to actually get your work into print is exciting.  My thanks to Chuck Sams for putting a cool magazine together and including me.


Well, seeing that the coffee is almost gone, it's almost noon and I need to make something of the day, I bid you adieu.  Have a great week- yours will almost certainly be more productive than mine.
Posted by Fontinalis Rising at 7:53 AM