Video Review- A Backyard in Nowhere 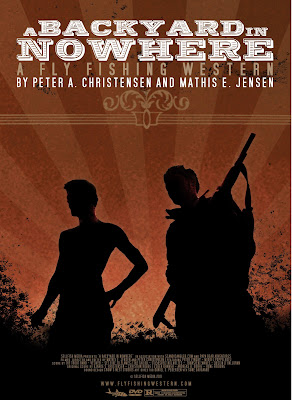 Four guys from Denmark embark to the Alaska wilderness, seeking adventure.  It's not surprising they find it.  What is surprising is the quarry they seek, the landscape they find themselves in, and the tale they tell.
And so I waded into the movie " A Backyard in Nowhere".  To paraphrase some opening dialogue, I didn't get what I bargained for either.

I love pike fishing.  There, I said it. Pike are big, violent predators.  The take is one of the most dramatic in fly fishing.  You're throwing big flashy flies, to a big toothy fish that eats anything from minnows to baby ducks.  You get to throw a big rod, learn your double haul, and strip line like a mad person.  Then when they hit, it's game on.  When you fish for big pike long enough, you're going to get injured, period.  They are tough, unpredictable fish with loads of big teeth and a lot of fast-twitch muscle.  I have the scars, and have clubbed them to death in the back of a boat before they broke any more equipment.

"A Backyard in Nowhere" delivers this fantasy in spades.  I've always wanted to fish the Yukon drainage in Alaska for pike and sheefish.  It is not the classic image of the Alaskan landscape.  It is flat lowland marsh and river drainage, complete with loads of mud, cut-off sloughs, and none of that mountain majesty and glaciers you've come to expect from the 49th state.  What this area lacks in beauty it makes up for in pike- big ones.   Fish that measure 40 to 50 inches and can weigh over 30 pounds.  Mind you, these guys find adventure and come to terms with the landscape, but it is the fish that define this trip.

Our protagonists head to the Innoko river in search of monster pike, not far from Holy Cross, a native village in the Yukon drainage .  While their initial efforts yield them some decent fish, it's after they consult with the locals that they find the giant fish.  These guys go out and camp in the Alaskan outback for a month, dodging bears, and bugs, and outfitters who appear to be bent on protecting their turf.  What it yields, is video gold- giant pike smashing flies; twenty pound fish that jump and thrash, and slash at hands with mouths full of 700 teeth.  This movie has some of the most compelling footage in fly fishing that I've seen.  It also has some of the saddest.

Where this movie misses is in its portrayal of the Native American locals. Perhaps it was honest, but I don't think their portrayal of alcohol abuse and illegal drug use are the type of message that is welcome at large.  I can cut these guys some slack for heading into the Alaskan wilderness on an adventure and letting their hair down.  What is harder to swallow is their depiction of Native American dissipation.  The locals in this film are drinking in virtually every scene, or high or both.  They drive their boats while drinking, hunt and use firearms while drinking, hell, they even butcher a moose while drinking.  These guys, while being talented film makers, missed the nuances of the social landscape, and their admiration of the locals becomes patronizing.  Likewise, their portrayal of their run in with the local outfitter Midnight Sun is somewhat muddled.  While it's clear there was some sort of dispute, it is unclear the exact nature of it, or why they left their camp on public lands so quickly.  They almost cause a serious escalation of the conflict by involving the locals before better sense prevails, and they simply pull stakes and leave.  I would be interested to know if they filed a complaint with law enforcement.

I wish I could give this film two thumbs up.  It is very beautifully shot and edited, the music sound track is exceptional, the fishing is fantastic, and they even find beauty in a less than picturesque part of Alaska.  I love big pike, and the action is dramatic and explosive.  This film makes me want to go.  What was harder to reconcile was their portrayal of the local Natives they claim to love and admire.

Now to start planning that trip.


Posted by Fontinalis Rising at 8:03 PM