This is in response to the latest OBN writing prompt, and in conjunction with Trout Unlimited and Field and Stream.  Make sure you check out their Best Wild Places.  Here goes.... 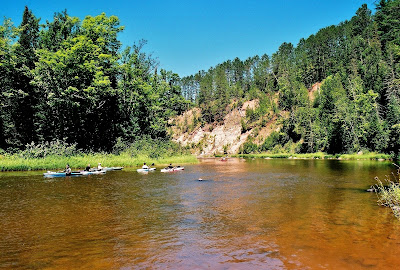 This is my best wild place- the South Branch of the Ontanogan River, from Ewen to Lake Victoria dam.  It is not Yellowstone.  It is not even Isle Royale (also part of MI).  It is working class Michigan, all the way.


Seven friends, seven boats, twenty-seven miles of river. The original plan was to do 55 miles of river; this was obviated by the rocks sans water staring back at us at the original put in. We eliminated half of the trip before finding enough water to float at the town of Ewen. This turned out to be just fine. The town of Ewen has a beautiful launch and parking area at the M28 bridge. From there on we encountered no bridges, only two cottages and precious few signs of human activity.
We drove up and stayed Thursday night at the takeout at Victoria dam. There's a rustic campground down a little trail that is difficult to see as you enter the dam area. It has a nice view of the reservoir, which is completely undeveloped. Bald eagles hold sway over its waters. It is surrounded by high ridges, some with rocky bald tops.

I rousted everyone out at six am Friday and we left before 8, but the aforementioned river conditions and the subsequent search put us on the river at 11:30. The first few miles are flatwater and slow current, the river a rich red color from the local clay. The only hazards are submerged logs. While getting ready to launch, a large smallmouth bass chased a minnow right up to my feet. This is gonna be good, I thought. Yet I fished off and on for the first few miles and didn't catch a thing. 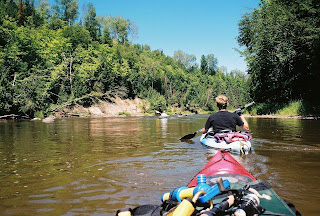 The younger guys kept up a steady pace, disappearing while the three senior members opted to float and fish. After a couple hours of fruitless fishing we gave up and decided to catch up. We paddled for at least another hour before finding them just downstream of the first rapid on a small sandbar. They were ashore checking the bank out for camping. We shot the location down as too constricted and lumpy and pushed on. We eliminated another half dozen locations over the next hour. Steep banks 6' to 20' high and thick brush made getting out difficult to impossible. Finally at about 5:30 we spotted a tongue of sand coming down a low bank and hauled out. Unlike the other rocky areas we had checked, this was pure sand with ferns growing on it and lots of flat areas. Everyone hauled out.

We set to pitching tents, securing gear, filtering water etc. Two guys built a fire and Keith figured out how to build two cook tables out of a slab of charred white pine stump that worked very well. After dinner we wandered down to the river to find Keith catching smallmouth bass. I got my rig out and proceeded to catch or break off eight bass in eight casts. We passed rods and lures around and everyone caught fish. As darkness closed in we sat around the fire, told stories and shared libations. We turned in shortly, and I fell asleep immediately, leaving the rain fly off my tent so as to get a glimpse of the stars.

I woke a couple hours later to the sensation of something hitting me in the face. At first I thought it was insects, but as I came to I realized it was water. My first thought was to roll over and ignore it, but thankfully, my head cleared. As I got out of the tent to put my rain fly on it started to rain in earnest. Rod was also out, adjusting the tarp over his hammock. By the time I finished I was shivering uncontrollably. Much to my surprise, I was instantly warm as soon as I got back in my bag. I slept like a baby to the patter of rain and murmur of the rapids.

I woke early the next morning, ready to get at the bass. I cast around for awhile with absolutely no results, so I finished my coffee, lit the fire and made breakfast. Gradually everyone rolled out, and after a brief safety talk we left at 11.

We camped about halfway down the river and from here on out it is mostly class II rapids which increase in intensity as you go. An hour after launching we encountered a large island where the river split in three braids. The middle channel was the best, and just downstream where it all rejoins was the most beautiful sand beach and swimming hole you could wish for. We decided to stop for lunch and a swim.

The rest of the day was spent running rapids of increasing difficulty, floating past banks several hundred feet high, immense white pines twisted by time, numerous bald eagles and ducks. I managed to find a few good holes that held numerous 10-12" smallmouth. In one, as I attempted to take down my rod to catch up with the others, a 12" bass grabbed my lure right next to the boat - I had to fight him on the line with my rod collapsed. I released him and immediately another bass grabbed my lure and snapped it off.

After several rapids approaching class III, and miles of maneuvering through boulder-bed rapids, evening was setting in - I felt tired, Rod looked tired and everyone wanted out of their boats. We went through the same process of trying to make different sites work. We now came to an unnamed waterfall, which is really just a class II-III gradual bedrock slide that totals perhaps 6 feet of drop. Except for a couple of boulders to negotiate it was really quite easy. From there we picked our way through some class III boulder bed rapids and down a short slide into a pool with a large grassy sandbar Island on the left and maple covered low bank to the right. We pulled out on the sand bar to investigate and then spotted an opening on the opposite bank. As we pulled up to it we could see a small metal tripod with a fire grate hanging from it. It was an old campsite complete with fire ring, a small wooden table, an aluminum boat and lots of flat ground. There was no sign that anyone had been there in a couple of years.

We again made camp, but Alex and Keith opted to camp across river on the sandbar island. The evening went much the same, with small bass biting one after the other below the rapids. I had thought we were in the backwater of the reservoir, but as I fished my way around the bend from camp, the river disappeared from sight and the sound of roaring water filled the valley. On either side, low rock cliffs lined the river. I caught one very nice bass at the head of the rapid, then headed back to camp to tell the others.

We roasted marshmallows, and then, as Keith and Alex headed to their island we tried to hurl flaming marshmallows their way to punish the deserters. This didn't work at all as a) it was too far and b) the marshmallows wouldn't stay lit. So we built a fire on a long flat, slightly cupped piece of driftwood and tried to float it their way. This didn't work either, so Braxton hopped into his yak and floated it over to them. This did not have the desired effect, but nothing's perfect. I later discovered that under the grass where I pitched my tent the ground was rocky and uneven, and spent a near sleepless night shifting around.

Sunday morning we launched a little earlier, eager to get back to the trucks and start the seven hour drive home. Despite the dramatic appearance of the rapids below camp, it was still just a matter of picking the right line and bobbing through the waves. I chose the wrong line and got stuck on the sandstone bedrock and had to walk my boat 100' downstream to relaunch, but the final rapid that dumps you into the lake made it worthwhile. We paddled the final 1.5 mile across Victoria reservoir in a stiff headwind. I felt bad for Alex, who having broken his paddle the first day, epoxied it back together, broke the epoxy on Saturday and now was fighting the wind with half a paddle. We left him behind. It makes a man out of you. Right? Right!!? 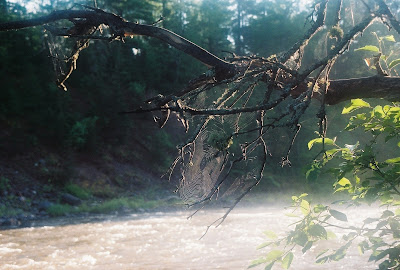 And so I conclude with a note of sadness. I don't know where to go from here. The South Branch of the Ontonagon River is probably the wildest river of its size in Michigan. In 27 miles there were no roads, no bridges, only two cottages, a deer blind and two cables across the river. There were no beer cans, no human tracks, no empty bait containers. We were the only ones we knew of on the entire stretch of river, barring one fisherman at the second cottage.   No canoe liveries serve it ( I called around- they won't rent to you if you're floating this stretch).  It is nestled in the remote north west corner of Michigan's Upper Peninsula.  In three days of floating, we saw only one other person near the only cabin.  It doesn't have trout.  It's mountains are not grand.  It doesn't have press.  What it has is smallmouth and solitude and wildlife, in abundance.  I love it because it is unsung, because it's NOT a national park.  It's not even a state park.  It is just a beautiful wild place, overlooked by the masses because it has no services, no campgrounds, for being no-name, non-descript and ordinary.  I feel fairly confident in sharing this place with you- you're not going to go.  It's too far, and you'll drive past many of Michigan's more famous destinations to get there.  Which for me makes it perfect. 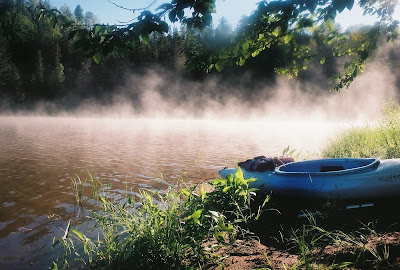 Posted by Fontinalis Rising at 8:52 AM