I was good enough to pat myself on the back the other day and share my 5 favorite blog posts I’ve written this year.  I don’t see a problem with that, but it begged the question “What were my favorite posts by my favorite bloggers?"  Being new to blogging, it took me a while to figure out that most of those nice people leaving comments on my blog were actually other bloggers.  Hey what did I know?  It has taken me awhile to get around, and there’s so many great blogs out there I can’t possibly keep up with every post by every blog, but I do my best.

I understand that when you write a list like this you run the risk of insulting some.  Without the time to run back through every blog  post by everyone that I try vainly to keep up with,  I’m sure I’ve left out some great posts.  Still, these are some noteworthy posts by some noteworthy bloggers and I hope you enjoy them as much as I did.

6. Wednesday Nibbles- Selbbin is Nibbles Backwards- Mike Agneta, Troutrageous!.  Ok, this one is going to seem a little gratuitous as it’s the one in which FR received Blog Love (a term which we all learned- and stole- from Master T!) but face it, long before you scroll down and see my banner at the bottom, Mike has you laughing, as he does most every Wednesday.  If I had to pick a favorite blog of the year (which I won’t) it’s probably Troutrageous!.  Where else can you go to get such consistently good entertainment, someone who can lightheartedly address issues and still make you think, a Tenkara guy who doesn’t act like it’s a religion?  And don’t forget Lilly.

5. November Rock- Ivan Orsic, Yukon Goes Fishing.  I’ve been following YGF for some time now and head over there whenever I need my video fix.  Ivan has gotten a lot of play lately by various outlets including Midcurrent and Orvis’ Friday Film Festival for Silver and Gold, his foot-stomping mash-up which I have to admit was a very strong contender, but you’ve all seen it already.  I really love his “Rock” series though, and his use of color and beat together in this piece was very original.

4.  Without a Camera- Sanders, Up the Poudre.  I love all of Sanders writing, but I think this post encapsulates his style- understated, slightly self-effacing, creative, beautifully written. 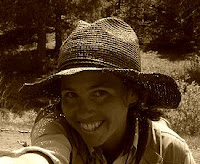 3.  The Dancing Cast- Erin Block, Mysteries Internal.  Erin Block is such a prodigious talent, that it was difficult to know where to start.  She is perhaps the most creative and profound outdoor writer to come along in a long time.  I’ve said before, that I only visit her site when I have time to think and digest what she’s saying- I miss a lot of posts.  I don’t know if this one is her best; it’s certainly a personal favorite of mine, and out of all the fantastic writing she’s done, I had to pick something.

2.  The Best Trout Fishing Trip Ever- Mike Sepelak, Mike’s Gone Fishin’…Again.  This was Mike’s entry into the Trout Unlimited writing contest, which he won handily, and it landed him in Montana with some other distinguished blog writers to do some fishing and check out what TU has been up to out there.  This piece flows, reminding you of every trip you’ve ever made or yet want to make.

And drumroll please…….
1
1.  Fly Fishing Needs Dirty Harry- Kirk Werner, Unaccomplished Angler.
Yeah, so Kirk got a lot of play out of this one, but why shouldn’t he?  It was and is one of the funniest posts I’ve ever read.  It’s not just that the idea was original, the writing is hilarious, and so are his graphics.  After this one Rebecca Garlock proclaimed Kirk was “toast” and thus sending him into temporary retirement.  It didn't last long, and Kirk continues to entertain, but this was certainly his Magnum Opus.

Posted by Fontinalis Rising at 11:40 AM