I wrote this piece for the September/October issue of The Cedar Sweeper magazine, a local print mag.  It's winter yet, and thus still relevant.  The Cedar Sweeper is a growing magazine about Michigan fly fishing.  My thanks to publisher Chuck Sams for including me.  If you're a Michigan fly angler or interested in Michigan fishing, consider subscribing.  It's a great local magazine. 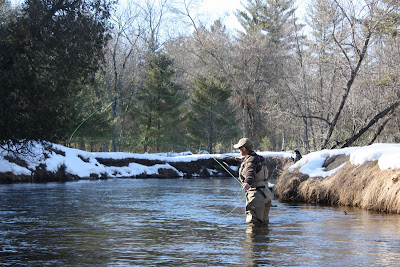 I’m standing in the river up to my knees, just downstream from a bridge.  I wouldn’t normally fish within sight of a bridge, but at this time of year it doesn’t matter, no one has fished here in weeks.  It’s early December, and a foot of snow lines the banks.  I’m the only person here, and I’ve rolled or caught a dozen small rainbows and one steelhead.  Right when I’m starting to get bored, my line goes tight, and a two foot long brown rolls to the surface.  I get a couple of head shakes out of him before he comes unpinned.  What was a giant brown doing in that little spot, far from cover?  No doubt he’s a lake-run fish.  I know what all these fish are doing here- bright ovals in the gravel, and red-flanked weary shadows, coho salmon on beds, are drawing all these fish in to feed on eggs.  I hook up on and lose four more chrome steelhead that day.  I’ll have to work on that.  Despite the chill, I’m warm in my wool and fleece.  Only my fingertips and nose know the temperature of the air and water.

As I write this, it’s early October.  Another trout season has come and gone in Northern Michigan, and gone with it are the hordes of fisherman who filled every parking lot and access, seemingly every bend and pool.  I enjoyed your company, enjoyed talking flies and lies, techniques, gear, hotspots, trips and all the typical bull that gets discussed by fisherman.  I love the almost carnival joy of the convergence of people to a river.  The summer trout season becomes one big long celebration, an exuberant expression of love for the gentle season, clean water, and wild trout.  When the gadding was done, I gave you wide berth, went further in to find some solitude, or fished at night.  For me, in the end, it’s about the fish and fishing, not other fishermen.

It’s over now, and almost everyone has gone home.  Once crowded lots are now empty, and it’s possible to find fish in lies they wouldn’t have used in the summer.  The lack of tracks in the river reveal just how undisturbed the fish are.  But there’s more going on than that.  Fish are spawning, and the rest of the fish that aren’t spawning have moved in for the feast.  Starting in September, the brook and brown trout turn on the feed bag trying to bulk up for their fall spawn and for winter.  Both are dressed in their finest- bright yellows and oranges, vivid spots and black stripes, white rimmed orange fins.  They only reflect their surroundings, as the riparian trees erupt in flaming color, a forest fire that will last for weeks, and then leave the trees just as bare as any fire would.  The bank side plants and flowers are vivid up until the moment the frost kills them.


There’s a lot of reasons not to fish the cold season, which I’ll define as September through April.  There’s a lot of reasons that anglers quit.  Vacation season is over, so a lot of anglers have gone home.  Many  anglers are also hunters, and the hunting seasons kick off here in September, dividing the time of Michigan outdoors people.  By the time November comes around, the deer season has everyone so distracted, no one is thinking about fishing.  Then there are the shorter days.  Even if you did want to come north fishing, would it be worth it when the days are only 8 hours long, and the first and last two hours of the day are intolerably cold?  Age and ability can play a factor- rivers can be tough enough to negotiate without having to deal with ice and snow.  Then there’s the cold that seems to seep deeper and deeper with each passing year.  Never mind the thermal reality, does anyone need that kind of reminder?  No, you’re better off staying home tying flies and catching up on your reading, or traveling to Florida.

This leaves the rivers wide open for the few willing to give up some hunting and brave the cold waters.  What we know is that September through December are some of the best fishing of the year.  In September the salmon start their annual migration, and the brook and brown trout go on the feed.  When October rolls around, the streamer bite for browns heats up- it’s one of the greatest opportunities of the year to catch a two foot long brown during the day.  This lasts well into November, when the trickle of steelhead in the streams becomes a flood.  These silver freight trains are fresh from the lake, feeding like crazy, and attack streamers like lightning.  The coho salmon continue to run, and post-spawn brown and brook trout line up to continue that feast.  As December rolls around and water temps cool the steelhead continue to entertain, but the fishing can be more hit or miss.  By the time you’ve hit January and February, why stop there?  Sure the weather will absolutely shut you down some days, but if you watch the forecast you can pick a mild afternoon and score.   What could possibly cheer your winter weary heart more than a chrome steelhead in January?
It’s not just that cold season fishing, especially the fall, is some of the best of the year, the fish the largest and most aggressive.  Fall is the magnificent season, colorful and dramatic.  Everything has an urgency to it- the spawning of the salmon, the changing colors of the forest, the violent strikes of steelhead, the rutting deer and bugling elk.  The shortened days add to this feeling- you really don’t have all day.  You need to get in, fish your spots, and get out before the cold and darkness get you.  Sudden snow storms in December can leave you stranded in swirling water and white.  The chill in the air that rouges your cheeks, nips your nose and stiffens your fingers calls for special clothing and a thermos of something hot to drink.  I think it’s this combination of challenges- cold weather, short days, solitude and big fish, that draws me to fishing those cold months.

I’m not saying that the fishing will always be fantastic.  You’ll have those days, those long cold windy fishless days, days when the river and sky seem to flow in gray monotone, days you wish you had stayed home and watched college football and tied flies.  But if you do it, if you put up with the cold and ice and dry spells, you’ll also have sublime days, when the trout or steelhead are biting, when you can’t seem to do anything wrong.  You’ll experience the sublime feeling of cradling a big fish at a time no one else even wants to be out there, you’ll experience a feeling of solitude and fortitude hard to find in todays world.

The icing on this cake arrives in March and April, when the wintered over steelhead are joined by fresh chrome fish, first a trickle, then a flood.  Having endured another long winter made more bearable by time spent on the water, you’ll get to enjoy the lengthening days and the warmth that has crept back into the sunlight, while the spring run ramps up, getting more intense with each passing day.  Before you know it you’ll be hearing your buddies talk about the upcoming trout opener and smile to yourself thinking “What opener?” 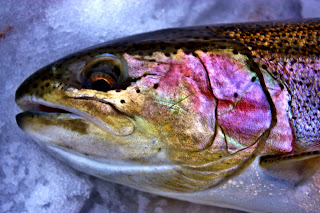 So here’s my suggestion to you- go fish a couple of days each month this cold season.  Buy some wool poly long underwear and fleece, get some of those wool fingerless gloves, and get out there.  The deer season here lasts three months, surely you can squeeze a day in here or there.  If you’re coming North for deer season, you’ll also be in Trout Country- shoot your deer, hang it up, then go hit a steelhead river for half a day.  Sure the general trout season is over, but dozens of rivers, literally hundreds of miles of stream, are open year-round.  Check the regulations, there’s bound to be some open water near you.  If you’re not into big game, nymphing the fly water on streams like the Au Sable and Manistee can be productive.  You’ll find that time on the water makes the winter go faster, more bearable, heck, maybe even enjoyable.
Posted by Fontinalis Rising at 7:23 PM