Scenes From the Day 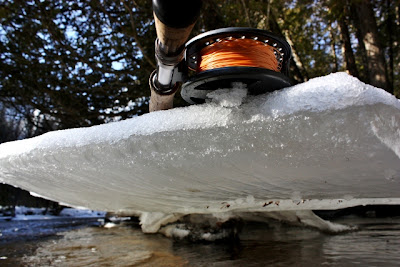 Yes I went fishing today.  It was a beautiful, even grand sort of day- sunny, calm, 40 degrees once it warmed up from single digits overnight.  I drove all over the place looking for fish, and didn't find them until the end of the day, but you know what they say about something you've lost- it's always in the last place you look.  I used to think that saying made sense until I realized how redundant and asinine it was.  I ended up hooking up on nine fish, but only landed one.  I was ready to chuck my flies in the river and order new hooks before I landed the fish pictured.  Steelhead are always a gamble, and I've adopted a new style of fishing them, similar to high-stick nymphing, but with egg patterns, and a lot of them get hooked in the tip of the snout.  The one I landed was firmly hooked in the corner of the jaw wouldn't you know.

Anyhow, it was a grand sort of day, and I hit several spots.  The first didn't go so well.  There's only one spot to fish (I fish a lot of marginal streams), and when I got there, there was some white-bearded local dude with a ponytail and a surf rod staggering toward the only hole, and so I left it to him and continued on.  At the next spot there was not enough water for a steelhead to swim upright in.  The ice was pretty, as was the view of the Mackinaw Bridge.  This spot was track city- coyote, bobcat, and mink tracks dotted the shoreline.  As I was leaving, a bald eagle drifted north over the Straits. I crossed those waters.  I was fairly astonished to see a freighter passing under the bridge in mid-February.  Usually the Straits of Mackinaw are frozen solid under 3 feet of ice.  Mackinaw Island residents establish a snowmobile route across the ice to keep connected with the mainland.  There's always what must be an uncomfortable period each winter and spring, when the ice isn't safe and the ferries can't run.  The only way on and off is by small plane.  I'm sure they stock up ahead of time, but I'll bet milk gets expensive. 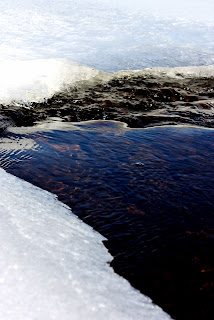 I won't bore you with the blow by blow of the day.  Suffice it to say that it was sunny, pleasant dead quiet, the sense of isolation causing my heart to pound a little.  No one had been here in a month, and the wolf tracks following the shore raised the hackles on my neck.  The deer tracks were fresher than the wolf tracks- if it's safe for deer it must be safe for me.  Honestly, the thought of wolves doesn't bother me.  The area I'm in used to have one of the biggest packs in Michigan, said to be 28 members strong, but that has dwindled down considerably, and judging by the groups of deer feeding everywhere near the roads, I'd say they're doing fine.


I fished for several hours, but open water and fish were scarce.   I wanted to fish another river on my way  home, so I re-crossed the straits in the waning afternoon light.  It was at the final stop that I found fish.  It was a great day, like a mini road trip.  I'll let the pictures say the rest. 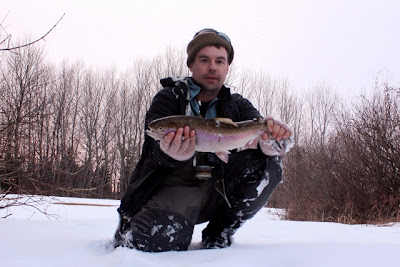 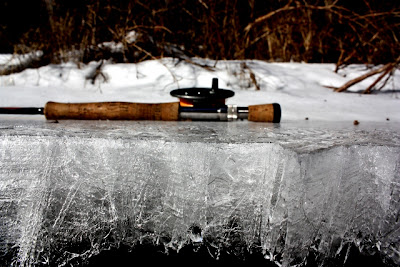 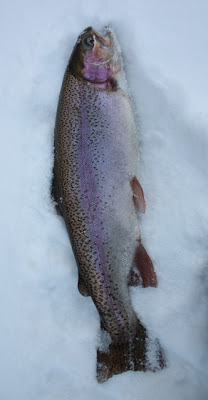 Posted by Fontinalis Rising at 5:26 AM