Farewell to a Season

It's mid-April as I write this.  A robin is singing loudly in the pre-dawn gloaming and the grass is greening a little more every day. I should be happy, but I have this faint twinge, a wistfulness. I have had the best steelhead season of my life and it is drawing to a close.  I will share my tale in words and pictures, a homage to a great winter spent chasing the silver ghost.  Some of the photos you've seen before, some you haven't, but I wanted to gather them in one place.  Here goes. 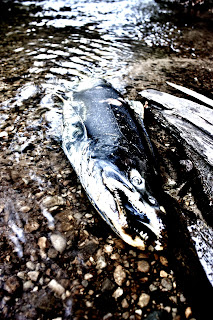 It began quietly mid-November, the carcasses of salmon a reminder of the feverish run pursued by feverish anglers, mostly gone now. 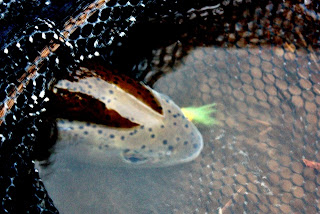 After a couple of fruitless outings, success. 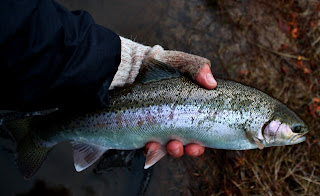 For the rest of the winter I caught at least one of these cookie-cutter fish on almost every outing, all in that 18-22 inch range, all feisty, dime bright, all of them made my day.  Not the big fish I'm after, just fun, and a sign of life and hope in the darkest of months.  I have dozens of pictures of these fish.  They all look the same. 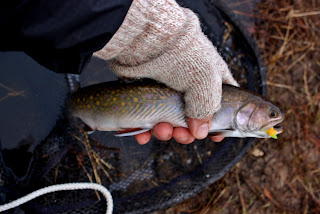 I also caught this small coaster brook trout, 16 inches, spawned out, too silvery to be a river fish.  Beautiful. 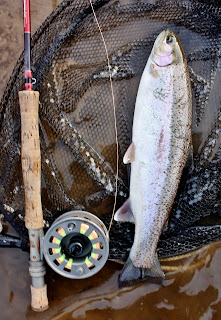 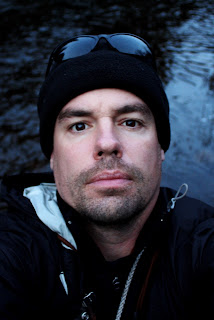 Winter is the dark season, a time for dark contemplation when you examine the shards of your life, the cold air and colder water making you ask those questions you don't want to visit.  "What am I doing out here?"  Fish-less days, or worse, days that I can't stay hooked up, make me question my skills and sanity.  Mid-winter forces a type of mental hibernation, my senses dulled by the muted monotones of winter, pushing my thoughts into shades of gray.  Or black.  Only the bright colors of the fish speak of vitality.  Perhaps this is why I seek them out. 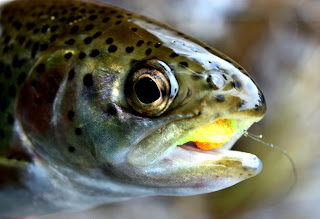 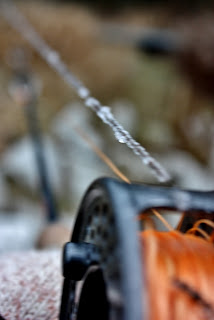 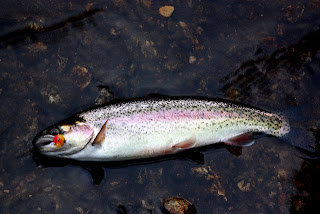 I caught dozens of these little trout until mid-January, at which point they disappeared.  I haven't caught one since. 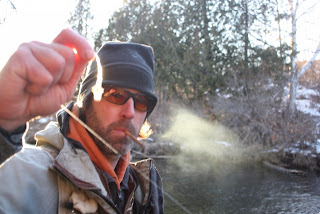 Mid-February, when the days began to lengthen and the sun began to feel warm again and instill a measure of hope, I ran into this guy.  He claimed to be a guide, but his tales were so fantastic that I wrote him off as a consummate BS-er.  He invited me to fish with him on a private stretch of river he had access to.  I accepted just to put him to the test.  On his second drift a large head lifted off the bottom and followed his spawn bag.  He hooked up a few minutes later.

An hour later I caught this guy- 35 inches long and about ten pounds.  What a great fish. 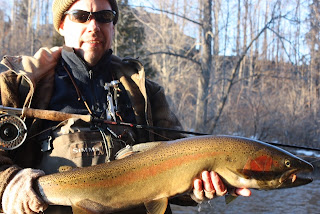 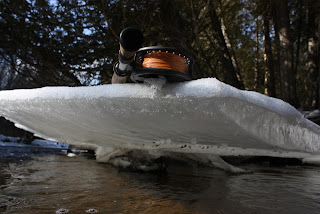 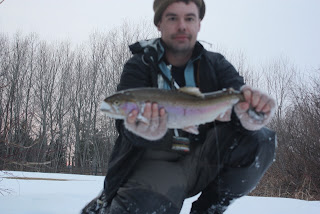 This was my next decent fish, in mid-March.  I actually hooked up on eight fish before landing this one.  Talk about rusty. 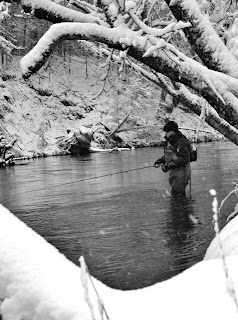 In late March came the big storm of the season.  Alex Cerveniak and I braved treacherous roads and near white-out conditions to hit the Pere Marquette river.  We didn't catch any fish, only some great images. 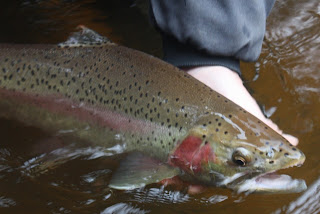 When April rolled around, the rivers filled with 5 pound bucks, all trying to stake a claim near gravel.  They were aggressive and fought hard.  I caught a lot of these fish.  These are just a few. 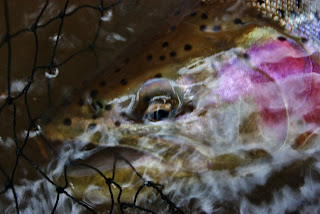 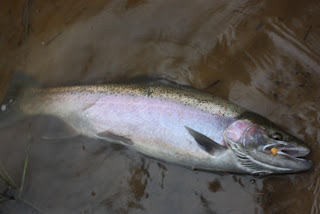 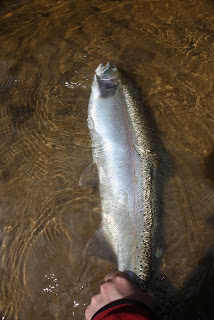 This hen I nick-named "the beauty queen".  She was bright chrome and very strong, my most beautiful fish of the season. 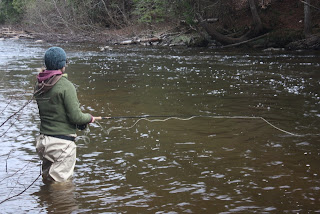 I fished several times with my friend Morgan.  She is a fantastic fly fisherman and a lot of fun to spend time with on the water.  I tried my best to get her into fish and failed.  It was nice to have someone to work the camera for a change though.  She tells me steelhead are her sworn enemies now.  Morgan happens to be dating Matt Dunn, a Pere Marquette river guide, former Third Coast Fly blogger, and current blogger at Fishbeer.com. He's a good writer and good guy.  I'm hoping they'll both come stalk the flats with me this summer. 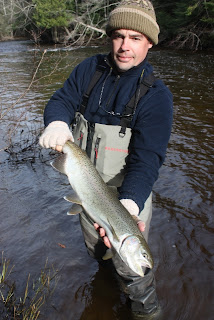 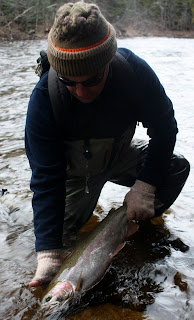 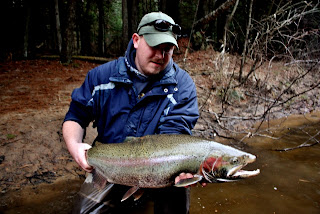 Alex Cerveniak joined me again not long ago, and we got into the fish.  I landed 5 fish out of 8 hook-ups.  It was a great day, and we captured some great photographs. 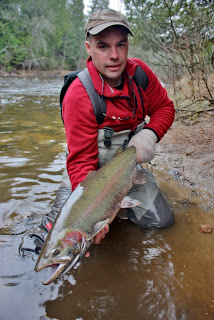 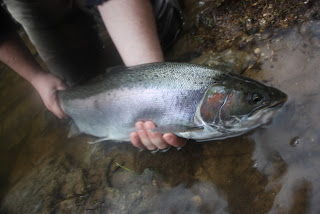 Yet another chrome hen.  The spring run has been fantastic for me, and I've landed at least 17 fish in the last two weeks alone.  I'm still pinching myself. 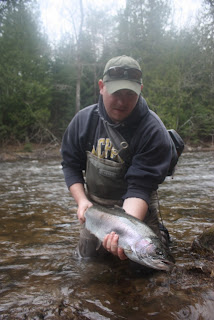 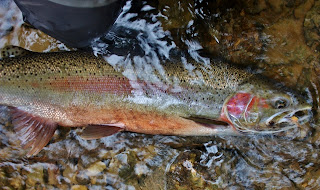 I love the colors on this fish, especially the orange belly, unusual on steelhead.

My season started in November, and unlike some years when the icy grip of winter clamps a fist on your fishing, this year it was gentle and kind.  Too gentle.  The first snows didn't come until late December, and we had 50 degree weather in January, unheard of here.  I worry about the condition our trout streams will be in come midsummer.  We seem to have shifted back into a normal weather pattern and if anything April has been cooler than normal.  Recent rains have blown out the rivers again, giving me hope.

Fait accompli.  It's done.    I can die happy now.  I caught steelhead every month from November until now, and it was wonderful.  I fished nearly every week, and went home empty only a couple of times.  Actually, I never went home empty.  I went home happy and satisfied with days on the water, days spent alone swaddled in wool-poly blend and fleece, while the currents scrubbed away the stress and the silent cedars mutely bore witness to a lone man purging his soul.  I caught fish.  I caught fish in some of the most beautiful water in the world.  I did it alone mostly, and in peace.

I am looking forward to summer, to its long days, the boreal nights echoing to the sound of distant fireworks and the cries of loons, the bug hatches, fishing dry flies again, retreating from the summer crowds into the back country to catch brook trout, hunting big browns at night, and stalking carp and bass on expansive flats under cerulean skies to the cry of wheeling gulls and plunging terns. Nothing ends without something else beginning, there are no voids in nature, only the shifting current of life borne on the seasons.  There is no fighting it.  "Go with the flow" they say, not so much words of wisdom as a statement of inevitability, and so I must, but I know that its current will bring me back to the time when rose-cheeked silver fish, fresh and sassy from a summer of feasting, will enter the streams again and keep me company through the lonely season. I know that I should cherish summer, but I can't wait for it to end. 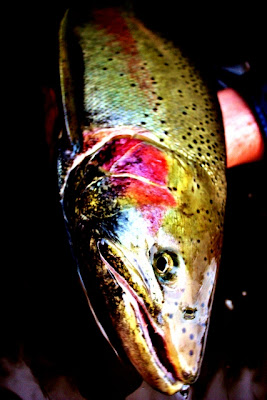 Posted by Fontinalis Rising at 7:58 AM