There’s No Such Thing as Coasters

Why Michigan Needs to Maintain Strict Limits in Coastal Waters of the Upper Peninsula. 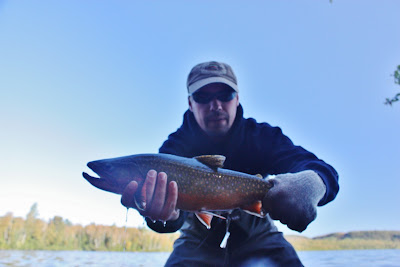 As I’ve publicized before, I’ve joined an adventurous group of gentlemen to go to Isle Royale National Park and fish for and document the endangered Coaster brook trout.

Except that they don’t exist.

Let me clarify.  I’ve always heard and read about Coasters.  They are spoken of here in Michigan in hushed tones.  Coasters are lake dwelling brook trout said to exist only in Lake Superior.  They grow to mythic proportions and ascend tributaries each fall to spawn.  While most are probably about twenty inches long and three pounds, they can grow to thirty inches long and ten pounds.  .  In times past they were said to be numerous, and sportsman flocked to UP river mouths to catch giant brook trout.  I have always been told that they are an endangered subspecies of brook trout native only to Lake Superior

I mentioned in a post some time back that we were going to Isle Royale to fish for the endangered Coaster brook trout and raise awareness for their conservation and one of my more astute readers asked the question “How do we know they’re an endangered species and not just brook trout?”

I had always taken the answer to that question for granted- this is Michigan, those are our fish.  As a budding amateur journalist I was intrigued.  After all, I’ve caught 18” brook trout through the ice on Lake Michigan near Petoskey.  DNR biologist Neal Godby once referred to the big brook trout they net incidentally in Burt Lake while surveying walleye as “Coasters”.  And the USFWS people I had run into at the lamprey weir on the Little Carp river in the Straights of Mackinac had told me of the large brook trout they catch incidentally in their traps there.  Could these also be coasters?

A couple of people who I had mentioned this to knowingly suggested that I don’t know what a real coaster is.  Perhaps they’re right.  It could be that they don’t know either.

So I contacted DNR biologist Neal Godby and asked him what information the DNR had and the ream of material he sent back was astonishing.   Long story short- there are no Coasters.  To be clear- Coasters occur as a phenomenon, but they are not a genetic subspecies or type.  Even more amazing was to read that all of the northern Great Lakes brook trout are genetically identical, even the Nipigon fish.  While Eastern brook trout had been stocked at one point in some streams in Michigan, solid evidence shows that all of Michigan’s cold streams connected to the Great Lakes were colonized by brook trout after the grayling were extirpated by fishing and logging activity.  We still have our native fish.  And yes, that would make those extremely rare large Lake Michigan or Huron brook trout “Coasters”.

The fun thing about being a sportsman in Michigan is all the intrigue and peril.  I knew that if I only shared the DNR’s research and chosen studies I would be ridiculed.  “Don’t you know the DNR is all politics?”  “They just don’t want another Endangered Species to manage, and so they cherry picked their studies to shoot down the designation”.

Those arguments could seem to have some validity.  After all, the information shared with me stated that the US Fish and Wildlife Service had applied for ESA protection for Coasters.  But what stood out to me was that they had lost.

So I contacted the Fish and Wildlife Service office in Ashland Wisconsin to find out what they had to say.  I had a really nice conversation with biologist Henry Quinlan.   It turns out that their ESA protection request was procedural.  They were petitioned by private groups to have Coasters get ESA protection.  They are required by law to jump through the hoops when petitioned and so they did. Except that USFWS research agrees with that cited by the DNR- there is no evidence that Coasters exist as a genetic strain.  None.  To the contrary, the evidence suggests that Lake Superior is the perfect home for brook trout to reach their full genetic potential.  Put them in some cold but miserable brook beset by otters and mink and they might live to three years and ten inches.  Put them in Lake Superior with lots of deep water to escape to and tons of chow and they can live for several more years and become the sumos of their kind.  When you add in the overwhelming genetic evidence the answer is clear to me- Coasters are brook trout in their perfect environment.  And this leaves me even more hopeful- as long as we have brook trout, there will always be Coasters.

So let me be clear.  Coasters do not exist, not as a genetic strain.  Coasters do exist as a phenomenon of Lake Superior, the ultimate brook trout pond.  This distinction is important, as it shifts the focus (and resources) from trying to identify and save a genetic strain that doesn't exist, to preserving habitat and promoting regulations that will foster strong Coaster numbers once again.

Michigan has other giant brook trout producers, and they are no Lake Superior.  I would die to catch one of these fish.  I’m not at liberty to name these lakes, but they do exist.  Fish in the 3-5 lb. range are possible.  Book a trip with Brad Petzke and then take a walk with him.  He’ll show you some fish.  The fact is, if you toss brook trout into any large body of water with ideal temperatures and a good forage base, they can start to resemble the brown trout you are used to.  They get big, mean, fat, jowly, and oh so catchable.  The point being, give them food and space and they will grow.  If anything, Coasterism is a testament to the genetic plasticity of brook trout.

I think that there has been a rather nostalgic idea here of what Coasters are- our salmon.  That they live that lifestyle, being borne in natal streams, smolting and heading to Lake Superior to feed and grow, then returning to the gravel they were born in to complete the cycle. None of the scientific evidence supports this.  The biggest frustration in the Hurricane river study was that once those fish dispersed, they almost never came back.  Ever.  Coasters don’t smolt, seem to completely lack a homing instinct, and many spawn on off-shore gravel.

So instead of trying to preserve our piscatorial Sasquatch here’s what I propose.  Let’s raise the bar here.  For instance, certain groups would like to see the catch limit in Michigan’s UP raised to ten brook trout, from the current limit of five.  This is absurd. To be fair, proposed creel limit changes would not affect streams that already have tighter restrictions, but what about the dozens of creeks and non-restricted rivers?   If you want Coasters you had better not be cleaning your streams out of seed fish.  Michigan has set the minimum size limit on all coastal waters of Lake Superior to 20 inches with a limit of one fish and this is a good start.  Canada has enacted similar rules- one fish per day that must be at least 22.5 inches.   When I was up in Nipigon last year they spoke of catching coasters as routine.  Henry Quinlan informs me this was not the case 15 years ago.  Some locals fought these rules, but in the end good science prevailed, and now they are catching fish again.

Michigan is a great state, with a proud heritage and a tremendous fishery.  It is my dream to stand on a beach in the UP and catch a Coaster some day.  I guess my argument here is less about whether Coasters exist than not wanting to see us take a step backward by enacting the proposed ten fish limit in the UP.  The days of “living off the land” are over.  They never existed, which is why fish stocks got so depleted in the first place, and why fish and game laws were enacted.  I enjoy eating trout, but I’ll never stock my freezer with them again.    I enjoy them fresh as a delicacy, not as something that is going to get me through the winter.  If you support the ten fish limit don't complain about the lack of Coasters. 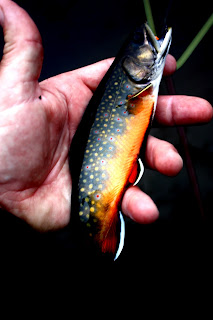