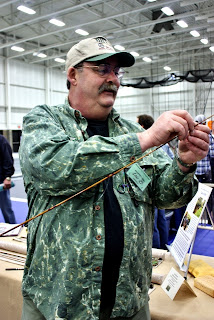 I first "met" Lou the same way I've met a lot of people in the fly fishing world- through Facebook. He would comment on my pictures and posts occasionally. I found out he would be at the Midwest Fly Fishing Expo as an exhibitor as he is the proprietor of Brack Hill Tackle, builder of fine bamboo rods. I was delighted when he insisted that I cast some of his rods.

Lou is a tall gentleman with a grandfatherly demeanor, and a quiet, almost self-effacing manner. I met him in person Friday night at the hospitality dinner, but it was the next day during this interview and while casting his rods that he really opened up.  Lou is very knowledgeable about bamboo, and he quickly took my knowledge on the subject from zero to, well, something.  I could have listened to him talk about bamboo rods and fly fishing all day, as he has some great tales to tell.


When I asked him my questions he became serious and I got a quick tutorial on bamboo.  I should warn you that I screwed up and cut off the recording of the first question.  I had asked him something like "why bamboo" and Lou explained to me the satisfaction of starting with a single culm of bamboo, and lovingly forming a rod out of it.  The rest of the interview went as follows:


FR: Is it builder or maker?

LB: It’s a subtle difference, but some folks seem to care.  I’m a lot more casual.  You can call me what you want, just don’t call me late for dinner.  Many bamboo folks prefer to be called "Makers".

FR: Okay.  Bamboo is a great traditional material, what do you think is its allure?

LB:  The million dollar question- why would anyone want a bamboo rod, and I don’t think anyone has the right answer.  For me it’s just that I’m literally starting from scratch.  You adjust the size of the bamboo strips, which determines the action of the rod, how it feels in casting.  They’re never going to be the ultra-high line speed, double-haul saltwater monsters that the new rod makers are selling.  If you notice, a lot more rods are coming through as medium actions and slower actions, traditional actions.  That’s the kind of feel you get with a bamboo rod you know.  Some of them can be pretty quick, pretty fast action for a bamboo rod.  They’re all a lot smoother, a lot more comfortable, and in my opinion they certainly are a lot prettier than a green or a black or gray rod.  It’s handmade, something that every owner can say “somebody  made this just for me”. That’s worth something too, some people care about that kind of stuff.  For me it’s just doing it myself.  You’ve got the planes and scrapers, the glue and the varnish and the silk.  When you’re done you go fishing.  It’s a beautiful thing.

FR:  How long have you been building?

LB:  I finished my first rod in 1998. I worked with Wayne Cattanach. Wayne lives over by Casnovia, and has been building rods and writing books about it for a long time.  He was nice enough to spend a few weekends with me, stretched across 4, 5, 6 months, to get the first one done, and I’ve been on my own ever since.  I’m coming up on rod number 100.  I’ll probably hit that next spring, or maybe the fall, depending on how many I build this winter still.  So I’ve got them all over the place.  I’ve got them in Ohio, Pennsylvania, Georgia, Austria, Alaska, a couple in Montana, a couple in Colorado.  They’re kind of scattered around.  A lot of them in Michigan obviously.

FR: So what do you say to the novice who is curious about bamboo?

LB:  The first question I ask is “What kind of fishing do you like to do?  What kind of river do you like to fish on?”  That puts us in the right neighborhood.  A little spring creek?  A lot of folks like chasing brook trout on the North Branch (Au Sable) or little creeks.  I’ve got a lot of 6 foot, 6’3”, 7’ rods that are great for dry flies, ants and little grasshoppers for brook trout.  That’s a party.  I go all the way up to spey rods.  I’ve got a ten foot "switch", and a twelve foot spey rod.  It throws 600 grains, a lot of T-14 if you want to swing big streamers.  Personally I like to swing traditional spey flies, traditional hair-wings and stuff.  I’ll still put on some sort of gaudy-ass thing if that’s what it takes to trick a steelhead.  The old saying is “the tug is the drug”, once you get that feeling it’s painful.  I frequently go out fishing in Montana, so I’ve got 8 foot,  6 weight rods that I fish out of drift boats on the Madison and the Yellowstone, you know, throwing  big ugly,  nasty nymphs, but you still can’t beat the dry fly.  A float on the Madison when the fish are up eating PMD’s is the best you can do, you know.

FR:  I am supposed to test and write about a custom built bamboo rod, so what advice do you have for me?  What do I need to do so I don’t thrash this thing?

LB:  The biggest piece of advice I can give is the outlook.  The standard advice for all casting is “relax”.  Let the rod do the work.  The harder you try the worse the results are likely to be.  Relax, let the rod work, get a nice gentle tempo that will flex that rod and load it, and it will usually take care of itself, and make you happy.  And look at it too, you’ve got a pretty piece of hardware you’re holding.  Appreciate that someone made that.  It started out in China, in some forest in China a year or two ago and now here you are.  Relax, slow down and let the rod do the work and you’ll be happy.

FR:  I appreciate you spending the time with me and explaining a few things, and I look forward to casting your rods.

Cast his rods I did.  Lou had me cast several.  He had me cast two 5 weights side by side to see the difference in taper.  I fell in love with the one- it casts 50 feet of line without effort, and the feel and flex of the rod was sublime.  Lou's rods range from the very affordable "North Branch" series to  models offering a wide variety of custom touches tailored to your taste for a one of a kind rod. His rods truly are a work of art with the kind of custom touches you expect, such as rare wood reel seats and agate stripping guides.  I'm grateful I had the chance to see and cast them.

Lou has a very nice website for Brack Hill Tackle, with great product pictures, information on various local events including rods he contributes, as well as biographical information. Don't miss the photo tour of his shop, which details the rod-building process. Make sure you check it all out at:

https://www.facebook.com/pages/Brack-Hill-Tackle-Fine-Split-Bamboo-Fly-Rods/68249711017
Posted by Fontinalis Rising at 3:19 AM