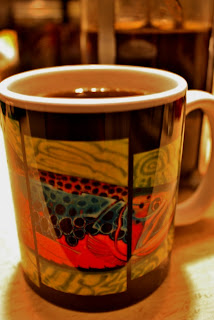 I know, I haven't shared Monday Morning Coffee with you in quite awhile. I hate posting when I don't have anything to say.  I've been working seven days a week and evenings for quite awhile, which cuts into my fishing and my writing time.

Not that I haven't been writing. As a matter of fact, this last week has been a big one for yours truly, with pieces being published in The Cedar Sweeper and MidCurrent with another due to drop in Blood Knot any day now. I'm a member of the Boyne Writer's Circle, part of the Boyne Arts Collective, and we've self-published an anthology called "Voices from the Boyne" on Lulu. If you have some strange itch to see my words in a book you can follow the link and order one, or you can order a signed copy from me- just shoot an email to fontinalisrising@gmail.com. I'll warn you that I only have two pieces in the book, and they both were published on this blog, but hey, whatever you like.


Not that I haven't been fishing either. My boss invited me out fishing with him one evening, so we trolled around for walleye on a perfect evening. We caught 4 and lost six I think, which seemed a tad excessive, but planer boards can be tricky. After work a week ago Saturday I went and fished my flats for carp. An old timer coming in from a day of bass fishing told me he hadn't seen a carp, but had landed 27 bass. The parking lot was full, so I hiked well past the first access, and when I hit the water there was only one other fisherman in sight. I landed a handful of smallmouth, and saw a couple of pigs. The wind blew so hard that most of my casts were 40 feet or less, but I did manage to roll my casts out instead of them landing in a heap on the water. Progress. Late in the day I was casting to some dark rocks, when one of them turned and followed my fly- it was an enormous carp, and after that I "saw" them- hundreds of carp milling around me. Some were there spawning, as told by the frenetic activity and the jumping, but some were nosing along the bottom, or even feeding competitively.  They would maddeningly follow my fly right to me, then spook when they got ten feet out from me.  I cast to these fish for two hours. As the evening wore on, and I changed positions, the feeding activity seemed to pick up. Finally, a competitive school of fish came by when I had my fly in the right place.  In the midst of my achingly slow retrieve, my line stopped, I pulled, and nothing happened. I pulled harder, and my line went streaking off.  In a school of fish that averaged about 20 pounds I had managed to hook an 8 pounder, but even small carp fight hard, and this one took most of my fly line faster than it takes to write about. I quit soon after this, as the sun was dipping to the horizon and a bloody sunset over Lake Michigan. I got as lost as one can be in an open marsh on a peninsula, with a chorus of black birds scolding me in the golden light. Two bald eagles came to check me out and escort me from their domain. It was a perfect outing.

If you're wanting to fish, or are visiting Michigan, the word is everything is hot right now. We're in the midst of the Hex hatch, which means night fishing for trout is where it's at, and you have the chance at a real dinger on a dry fly right now.  The down-side is that daytime fishing will be marginal.  If you can't fish at night, try the smaller streams for brook trout.  The bass fishing on all the lakes is red-hot and this is prime time for catching bluegills on foam spiders. White is the best color followed by black. The carp are inshore on all of the flats areas- Traverse Bay, Wilderness State Park, and Beaver Island- and offer some exciting sight fishing.

I spent this weekend fishing with Tom Hazelton, who was up on his own dirt bag fishing adventure.  Tom works for Scientific Anglers and is an all around good guy.. We tried to fish the Hex hatch before the storm blew us off the water. We got a couple of fish in the twenty  minutes we had, then went back to our campsite and slept through a long, windy and stormy night.  My tent leaked and fortunately my sleeping bag is warm when wet. We fished for brook trout, smallmouth and carp yesterday and did okay. His visit is probably a post in itself. I had a great time with Tom and hope he'll come again soon. Tom- your single days are numbered so you'd better get some fishing in this summer.

Well, I have to run out the door. Have a great week, and if you can, get out on the water.


Posted by Fontinalis Rising at 3:56 AM