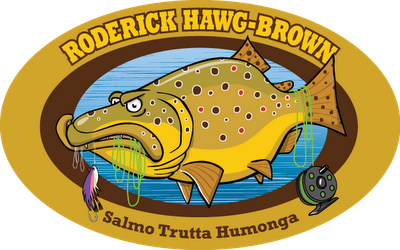 As you know, I have conducted an awful lot of interviews lately. Some were of guides, others of rodmakers, and even the odd blogger. But no one has yet interviewed the fish themselves. Until now.... 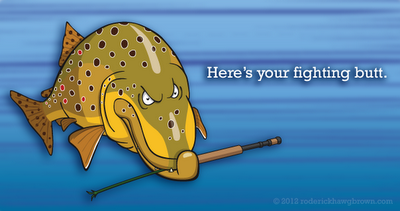 Most of you know Roderick Hawg-Brown, or perhaps not. After all, if you never have met him personally how could you know him. I have met Mr. Hawg-Brown on at least one occasion, and so if you haven’t had the displeasure (he doesn’t like you) I would like to introduce him to you.
I donned a snorkel and a Babel Fish and plunged beneath the waters to endure this irksome conversation (you should see how I took notes). What you have to realize about Mr. Hawg-Brown is that he is surly, abrasive, evasive, invasive, a loner, but a the same time shy and reclusive. He has a lot of “ives”. Sort of like a skin-rash for Scottish trout. While our conversation was combat”ive”, I did manage to wrest some answers from him.

FR: Mr Hawg-Brown… may I call you Roderick?

RHB: No. And while you’re at it, keep your distance or risk losing a few digits. I’ve not fed since a scrawny muskrat passed by my cut bank two days ago, and I’m in a mood.

FR: Mr. Hawg-Brown- you seem to despise and disdain anglers, so how do you explain your popularity?

RHB: Watch yourself–you’re putting words in my mouth. Let me clarify: I may have a general disdain for angler types, but I acknowledge, of free will, that without them I would be a shell of my present self. Think of it as a symbiotic relationship whereby anglers are the parasite, and I the host. Popularity? I’m not aware of any such thing. I believe if there is any widespread allegiance to myself it is more a reflection of the state of pathetic anglers than actual popularity on my part. That being said, I am a rather likeable chap.

FR: You are frequently described as a pike in a trout skin- discuss.

RHB: Before we get too far into this, you DO realize that you’re asking questions of a fish with a brain the size of a pea, yes?  A cartoon fish, with a brain the size of a pea to be clear.  Can you restate the question?
I think that’s fairly self-explanatory so why go into detail? That being said I’ll indulge you because I realize you’re tying to fill space here; to shamelessly attract readers, if you will. You’ve heard of gender identity disorder?  From the moment I was hatched from a gravel-covered egg I’ve felt confined by my relatively docile exterior. Inside lurks the spirit of a much nastier breed of fish than a trout. Because surgery is not an option, I live my life according to how I feel. I make apologies to no angler. I am who I am.

FR: You were a world record here in Michigan, then Arkansas, then Michigan and now Wisconsin- would you say you are flip-flopper?

RHB: World records are merely circus sideshows; a label created by silly, insecure anglers for their sake without regard for the fish. I am who I am, where ever I go, and I speak the truth. What comes of that is what it is. I have no control over the matter.  But yes, I’ve tipped a few scales in my day. 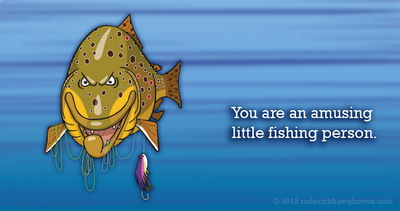 FR: You seem to have a penchant for rodents? Is it the flavor, or do they just irritate you? Explain. And how do you get the fur out of your teeth? Just curious. Not that I eat rodents or anything.

RHB: If you have to ask you wouldn’t understand. Actually, what I fancy most about rodents is that as they slide down the gullet, their tiny toenails scratch the inside of my digestive tract. They are the ultimate colon cleanser. That may be more than you had expected, but then again, you asked. Why would I want to get the fur out of my teeth? BTW, what is that boiling in the pot back at your campsite? Smells awfully familiar to me. Squirrel, by chance?

FR: Let’s say it was a really nice day, the water was stained and high, and there were bugs galore hatching out- what would you absolutely hit? And could you please narrow this down to a specific dry fly?

RHB: I’ve been known to bite the ankles of recreational floaters who dare to dangle their legs over the side of their Wal-Mart rafts. That’s about the only time I’ll rise. Dry flies, as you know, represent insects floating on or in the film. They are to be ignored. Too little return on the investment of energy spent. You were expecting me to say a March Brown?

FR: You’ve been to such destinations as Patagonia, Iceland, Lake Michigan of course (is that a day spa for the Hawg-Brown clan?) Montana and Loch Levernochal- where can we expect to see you next?

RHB: Kamchatka.  I’ve been giving some serious thought to a life of anadromy. Decades of life in the stream have left me wanting more. I believe I’ll develop a taste for seal pups. Lake Michigan? Meh.

FR: Mr. Hawg-Brown- you seem to be coming up through the world. What’s next? A play? Screenplay? Lunch with or as Warren Buffet?

RHB: Again, my comeuppance is more something you anglers have pinned on me than anything I ever intended. Come what may, I shall take direction from no man, so a Broadway production is out of the question. Certainly my unwillingness to be a supporting cast member will cap my commercial success. But I have been written into a screenplay pitched to a Hollywood producer and will be featured in what you humans refer to as “apps”. It’s all very strange to me.  Did you say buffet?  I hope nutria is offered.

FR: On a regular basis you seem to want to eat streamers that look like rainbow trout. Is there some dynamic we should know about?

RHB: No. I believe that speaks for itself. Rainbow trouts are the scourge of the earth. Thanks to hatchery managers and angler demand, those weak, neurotic and leaping fish have spread like the plague. I’m merely doing my part to keep them in check. Now, I know what you will say next: that brown trout are non-native in many waters as well. Let’s no go there. That’s a gentle warning. Next question.

FR: You have conquered the world of fly fishermen, leaving them weak, shaking and gibbering, yet a very few anglers seem to have your number. What is the chink in your armor? And what pound tippet defeats you every time? And what rod have you been unable to best, and……..(the interviewer falls into a slobbering heap as Mr. Hawg-Brown swims away, disgusted, into the murky depths.)

RHB: It’s not so much that I’ve conquered them. Fly anglermen are and always have been inherently weak, shaking and gibbering. I’ve simply exploited that. Except for Teddy Roosevelt. That man was cut from a different branch of the human family tree, and they don’t grow them like they used to. Admittedly, I fell victim to his offering, but I was young and had other things on my mind at the time. While I am not likely to make the same mistake at this stage of my life, I would recommend stainless steel leader. And protective goggles, because when that thing snaps, it’s coming back at you with great velocity and evil intent. I think we’re done here. At least I am. 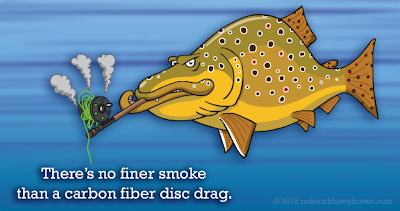 Fontinalis Rising agrees with the Teddy Roosevelt observation, but little else. I have since crawled back up on shore, removed the Babel Fish from my ear, and resumed my pursuit of Mr. Hawg-Brown. May he live for ever, and die a thousand deaths!

If you dare you can keep up with Mr. Hawg-Brown at: