Sunday Sojourn, or Why We Fish 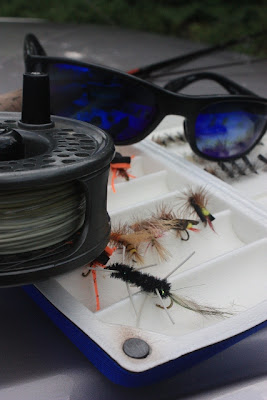 I tried to fish on Sunday. I say "tried" because there were so many obstacles, real and perceived, not the least of which was the fractious weather of the night before. As the sun had waned thunder storms popped up, rattling my place and drenching us with rain. There was no perceptible front approaching from the west when I checked the radar- all was quiet one moment, and in the next Lake Michigan had disgorged a band of storm that washed slowly over the Straits of Mackinac. Two hours later it happened again, and it proceeded to unleash these storms in waves until the light had once again turned gray. My sleep was restless, punctuated by flashing light, the sharp crack of thunder, or more constantly, the deep rumble of it, like a freight train trundling off into the distance, and occasionally, the sound of heavy rain pelting down on my metal roof, and the waterfall sound of it being dispensed with. 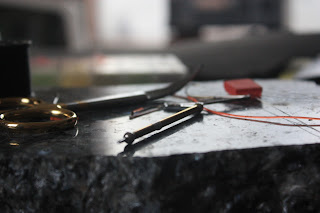 Such nights make me restive, but for some reason I find them relaxing, blissful even. I awoke early Sunday morning and drank my coffee to the rumble of the last of the storms, my eaves still dripping. I had fished all night Friday without success, arriving home at around 4 a.m., sleeping until ten, a leisurely breakfast, then the balance of Saturday was spent writing. Scribble scribble. I had intended to fish for brook trout Saturday evening, but the threatening skies and an unfinished paragraph had discouraged me. I'll fish tomorrow.

Sunday I awoke to a wet world, stifling humidity and building heat. I also awoke to that same pile of laundry and stack of dishes. I dispatched the domestic chores, tied a couple of flies, and by early afternoon made my way to some new brook trout water.

The next problem would be that full night of rain. I checked several local river gauges online and sure enough, they all had a significant spike to them.  I went to a stretch of river I have only fished once before. It is beautiful, choked, darkly stained, and difficult to access- perfect brook trout water. I bumped along the narrow track, grateful the gas drillers had filled the low spots with crushed rock so I could get through. 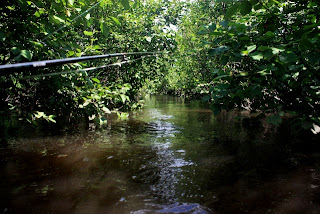 When I finally arrived, literally at the end of the road, there was nothing but heat, a couple of deer flies, and a rustic stairway leading into the water. When I looked the water was lapping the step and very dirty. It was also quite cold. For the first half mile I hardly fished at all, the river a virtual tunnel of tag alder. You wind your way up, over and through it, trying not to be swallowed by the blackness of the water. My few casts were of the bow-and-arrow type, shooting my fly into the few lies I could find, or more often, into the branches. I did manage to catch one fish, and miss two others, all at close range. I found some very promising water, including a couple of holes that nearly swallowed me, but in the end the heat, high water and lack of fish made me think of other things I could be doing. After all, I live here- why beat myself up on a bad day? I'll come back next week, or some evening after work. 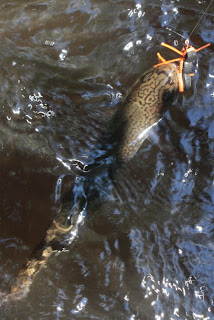 I then broke a cardinal rule on this particular river. Two weeks prior I had explained to an Ohio angler that we don't get out of this river and hike back to the vehicles. We make an about face and walk back down the river. The reason is simple- it's set in a wide flood plain choked with tag alder, a maddening jungle of sharp grass and thick brush, nearly impenetrable. But no, I actually climbed the banks and for the next half hour I stumbled through this maze, the visibility measured in feet, the grass head high, turning back often at the walls of brush and downed trees, trying to keep the sun just over my right shoulder as a bearing. 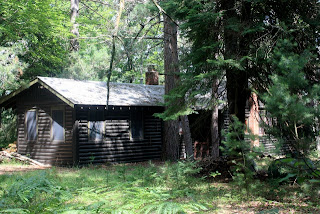 At last I gratefully stumbled out into open forest, I turned north and headed back on a game trail. The rank livestock smell told me that a herd of elk had come through recently, this morning as a matter of fact, as the night's rain would have washed the area clean. I soon came to a lone log cabin set in the pines, someone's hunting camp, pristine, with a red brick chimney, which I liked for the fact that red brick is hard to find in Northern Michigan. It looked abandoned, except for the whiteness of the split logs on the wood pile which whispered "we have been here". Regardless of its state now, this cabin will be occupied come November, I guarantee it.

"I knew the rivers were blown and dirty, I knew it was hot, the bugs bad and the road long."

What is the point you ask? I went just to go, to be there- to be. I knew the rivers were blown and dirty, I knew it was hot, the bugs bad and the road long. I just needed to be out there, to curse the tag alders, to see one little trout glistening in my hand. I needed to stumble through that swamp. I needed to smell the scent of young bull elk mingling with that of green ferns and hot dead leaves. I needed to see that cabin, to imagine what it is like to come up here and get away, to have all of this be fresh and new, the place where you caught your first brook trout, or shot your first buck, saw your first bull elk, rutting, muddy, red-eyed and hoarse from bugling.

Fly fishing isn't about catching fish, or being a great caster, or even about knowing how to tie flies. It is about experiences and flavor, it is about living life in intimate contact with the natural world; of touching, breathing, smelling and etching deep into your mind what it is like to be out there, exploring our home.
Posted by Fontinalis Rising at 3:59 AM