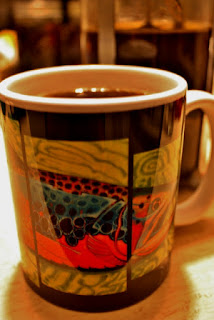 Aaaacccchhhhppphhhhh....... yawn, stretch, scratch, repeat. Is it Monday already? It must be time for coffee. To paraphrase Homer (Simpson), "Jay no do coffee well without".

I'm not sure what's going on in the rest of the country, but the weather has stayed cool here with regular rains. It still looks and feels like summer, but change is definitely in the air. This is the prettiest time of year on the rivers here, as all the bank-side flowers are in full bloom. It's really turning into quite the month for brook trout too. 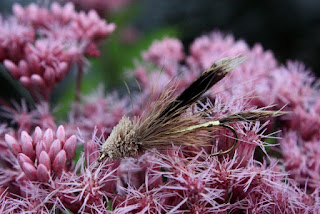 Most of the major fly hatches are over now, except for the Ephron hatches down on the Au Sable system, which doesn't affect me much. Low clear water and bright days have pushed all but the smallest browns into hiding, but the brook trout just seem to become more active, feeding on the waning trico hatch and the steady trickle of olive's. They also feed heavily on terrestrial insects, and a brook trout's motto seems to be "If it fits in my mouth I'll eat it".

I got a message early last week from artist Jeff Kennedy that he would be in the area, inquiring if I'd like to hit the water. We fished together Wednesday evening. Come to find out Jeff is the artist behind The Fiberglass Manifesto's Retro Fly design that is plastered on some of my clothes and gear. Jeff turned out to be a really nice guy and we had a great time. We didn't catch any monsters, but once again brook trout saved the day. We actually saw schools of them, and they were quite active. They also were so line shy that just catching a fish was a major accomplishment.  We had a great time and I want to thank Jeff for looking me up and hitting the water with me. At the end of the evening on my last cast I was simply letting my fly drift back to me when a small brown struck at close range, shot skyward before I could even set the hook and raced downstream. We were laughing so hard that it took me a few minutes to land the fish.

Friday I hit the water again, fishing three streams close to where I work.  On one tangled knot of a river I caught a ten inch brook trout that made it worth the trek, the deep mud, the stabbing cedar branches, and the hunger pangs. I didn't bring my camera Friday, as I just wanted to enjoy my fishing.

Saturday I hit a distant section of the Pigeon river, way out in the Pigeon River State Forest.  The river was stained and up a little from the heavy rains that had cleared out that morning. The fishing was extremely tough, with no fish rising anywhere. The wind blew cold under gray skies, and I switched flies constantly trying to see what would do the trick. I caught just a handful of fish, but they were all beautifully colored brook trout, including one 8 and one 9 inch fish. What they lack in size they make up for in beauty and attitude, and for me there's a special satisfaction in catching native fish. It has been very gratifying over the last twelve years to see brook trout numbers (and sizes) steadily grow as brown trout stocking has declined. Some rivers where I used to catch mostly browns now offer more brook trout.  There's still plenty of browns around, but the brook trout seem to be more than able to take back their rivers when given the chance.

Which brings me to yesterday, fishing once again with Alex Cerveniak, this time on the South Branch Au Sable river. We fished in the beautiful Mason Tract near the chapel. The fishing was typical of August- low clear water, a handful of tricos coming off, spooky fish. Brook trout again saved the day. We made up for the spotty fishing by working at our photography, though Alex shot far more than I did. It made for an enjoyable day, which we ended by getting a burger at Spike's in Grayling, and I ended the day with an afternoon nap and an early bed time.

Other than that there's not much to report. I have at least one outing this week that I'm excited about, but I'll report on that next week. The cooler weather is forecast to continue. There's a trickle of salmon in the rivers which will swell with each passing front into a flood a month from now. With less than three weeks to go for my Isle Royale trip I'll be increasingly focused on getting ready for that.

Well, this post has stretched long, and the coffee is gone. Have a great week.

Let's get after it.
Posted by Fontinalis Rising at 3:58 AM