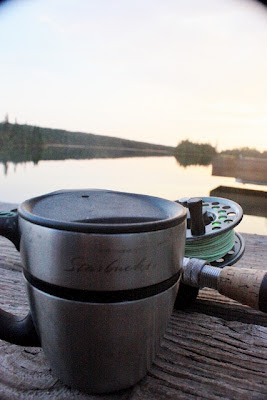 Aaaauuuuuuchhhthphphhhh. Yawawn, stretch, scratch, repeat.  It’s Monday in Isle Royale. This has been a great trip so far. let's have some coffee. 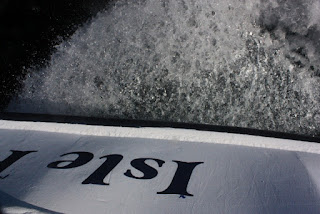 Just getting here was an adventure. It’s a seven hour drive from my house, and I stopped a lot to take pictures and stretch my legs (and back). Once I got to Copper Harbor where the ferry and our hotel was I found  a general store, a couple of curio shops and restaurants and no cell phone signal,. Every motel room was full,  because it turns out that Copper Harbor is one of the top ten mountain biking destinations in the US, and there was a race this weekend. I bummed around town, checked into the dilapidated motel, got some dinner at The Mariner, and went back to my room and tied flies. The guys got in late, and we talked and laughed way too late into the night, or should I say morning?

Our ferry left at 8 a.m. Saturday morning and we sailed on the calm blue of Lake Superior, the low mountains of the Keewenaw Peninsula receding into the Lake, and then the outline of Isle Royale itself lifting from the northern horizon.  In the course of the voyage we were never out of sight of land which was a surprise in this 56 mile crossing. It took about three hours. 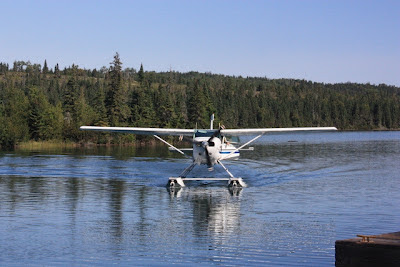 When we arrived, we went through orientation then checked in and found our cabin. It is situated on a ridge overlooking Tobin Harbor, which is the focus of the Coaster brook trout population. Chris Reister and Brett Watson had opted to fly via float plane, and we heard its droning while we were checking out the cabin. We hurried down to welcome them to the island. No, we didn’t have spruce leis. 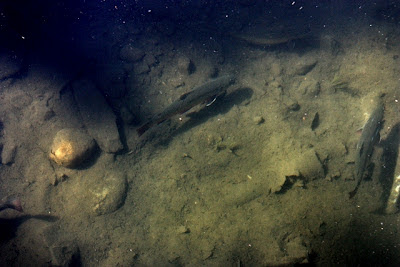 While we were standing on the dock talking, someone looked into the water, and right there beneath us seven Coaster brook trout swam in circles. They were chasing bait fish clustered around the dock. We had some necessary business to care for but hurried back down to the docks with our rods. Bob Miller was the first to score, and on his second cast. A few minutes later he had another. Then I hooked up on a good buck. The fish were all 18-20”, and beautifully colored.  Brett would catch one later in the evening. We launched our kayaks and poked around, saw a few more fish, then went back to the docks after dinner and played a game called “Learn to Spey cast” in which Chris Reister managed to break his spey rod and put an early end to our bet as to who would break a rod first. Brett came in second on Sunday.

While it was nice to see fish right off the bat and even catch a couple we quickly tired of the dock fish, not to mention that the Tobin Harbor dock is a favorite after work swimming hole for the park and lodge workers. The fishing has turned out to be tougher than our early results would have indicated, with sightings being sparse. I had one fish follow my fly on Sunday, but there’s very little surface activity to help you pinpoint fish, and the harbor has been invaded by bait fish dimpling the surface everywhere you look. 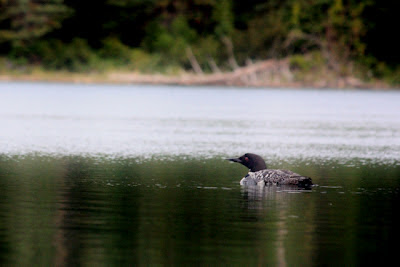 We have two full days of fishing left and so we’re still hoping to crack the code here and get some good fish. I should say that one highlight of this trip has been the food, provided by Erin Chittum and Peter Nunez of Petite Cottage basically at cost, or at least I don’t think I could have gotten food for the trip for the price I paid to eat like a king. Sirloin stew, lasagna, enchiladas. They sent a loaf of zucchini bread for each of us, as well as trail mix, cookies, homemade jerky, guacamole, vegetables and bread sticks. No one will be losing weight on this trip for better or worse.

Well, there’s too much to tell, so I’ll leave it there. I doubt I’ll get another blog post done before I get home so have a great week. Keep an eye on our Facebook page for fresh pictures etc., and I’ll get some posts up soon here and elsewhere.

Have a great week. I’ll be here on Isle Royale.

Posted by Fontinalis Rising at 11:01 AM