Taillights blaze and traffic stops. A woman gets out of a minivan, flashers blazing and as I pull up, a pathetic figure thrashes on the cold gray asphalt. At first I think it is a coyote, and I think "good!", but then I see the collar- someones pet. Cars are backing up, red lights and headlights veering all over the place, as this poor creature thrashes on the pavement, it's jaws agape, tongue lolling, it's eyes still eager to please. I see those useless back legs and despair.

When I was a kid, we had a black lab pub named Belle. She was gorgeous and sweet. One night, when returning from our piano lessons my mother ran her over.

This is why I don't play music or have a dog.
Posted by Fontinalis Rising at 4:57 PM 8 comments: 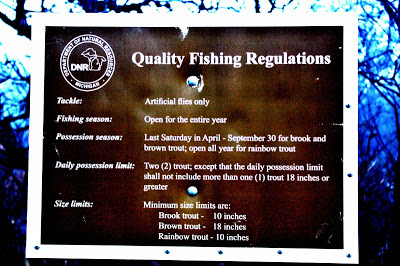 Maple Syrup as it Pertains to Fly Fishing

Cold is a lot like maple syrup on pancakes. At first it sits on the surface, congealing, aloof, plotting.   Soon it seeps in until your pancakes are too sweet, or you are too cold. Brandon is cold, and not sweet at all, having moved to Michigan from Texas. He drove in the pre-dawn fog to meet us at Old Au Sable Fly Shop in Grayling, arguably the nexus of fly fishing in Michigan.

When I left my door it was 20 degrees.

This is the season of dead deer. They lay on the sides of the roads. They lay on top of cars, and trucks and tailgates.  Dead deer hang from trees, and poles strung between trees, and one will greet us at our take out, or rather, a skin, rib cage and head, the detritus of the current season, cast off by a Michigan “sportsman”.

“Brandon- do you need some deer hair?”

“No” is his response, thus ending any further interest in the carcass, so thoughtlessly dumped.

We drifted for most of the day, after some considerable debate about how to launch, but in the end the private land owner was very gracious, and we drifted off in the fog, with big dreams of big trout. The river bottom was polka-dotted with redds of brown trout, bright tear drops of gravel on the tan bottom. Hundreds of them, and some the size of a bathtub. We must be in good water.
Sure enough, we started spooking fish, schools of them, but it took quite a bit of time to get fish to react to our streamers. Time, like maple syrup, was trickling by, slow and saturating. Koz and I took turns on the oars, Brandon switched from bow to stern and back to bow. We all switched flies. Koz got a couple of fish, but we never did see any of the pigs we came for. 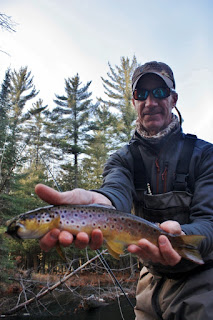 Michigan can be the worst of mistresses. It has some of the best fishing anywhere, while regularly dishing out days like this.

We drove north to the Straits of Mackinac in search of bass and pike. We had slept in that morning, conversing over a leisurely breakfast of scrambled eggs, sausage and sweet potato fries finished with maple syrup.

“Fly fishing is the rod, the reel and the line” declared Brandon Robinson. This is perhaps the most succinct appraisal of fly fishing I’ve ever heard. For one thing, it doesn’t address the fly. The fly is ephemeral anyways, and in the age of Fish Skull’s, can you really say it’s not a jerk bait?

When we finally reached the literal end of the road, Brandon got out of his Jeep doubled over. He was blaming the ginormous cheese-sopped sandwich he had eaten at Subway. Cheese seems to loom large in the culinary life of Mr. Robinson. He should have picked up on  my abstention.  For all I know it was the breakfast I had cooked (or didn’t), but I’ll let Subway take the blame. Food poisoning is food poisoning, and we talked about the fishing between stomach cramps, but soon it got so bad that he declared he must go, and so I led the way back to Mackinaw.

We’re Not in Africa Anymore 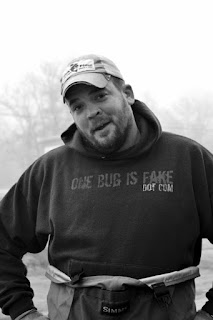 “Mr. Robinson I presume?” This is somewhat how I had envisioned this meeting, a re-enactment of H.M. Stanley meeting David Livingstone in Africa.

For one thing Brandon has gotten all of 2 hours sleep in the last 24; something about brisket smoked over hickory and getting grades in. Brandon is a teacher, and apparently gunning for teacher of the year. Koz and I rolled up to Old Au Sable Fly Shop and greeted Brandon, convinced him to ride rather than follow, and we made our way to the river.

After some intense negotiations we launched at M-72 on the Manistee river. I rowed standing up to down below the bridge where we would load the boat, staring at the bright redds, shining tear drops of gravel staring up at me.

My meeting with Brandon was the result of my life in the on-line realm, and I have to say that I have made a number of friends through this brave new world- among others Cameron Mortenson, Mike Schmidt, Sanders, Alex Cerveniak, and April Vokey, all who I count as personal friends, and now Brandon. Still, I expected something- some meeting of the minds, a recognition, some secret handshake. I should know better by now. When I first met Cameron Mortenson it was for a night float and he met us after dark, meaning that even after spending a whole night on the water with him I still didn’t know what he looked like until I stayed with him a year later at the Midwest Fly Fishing Expo.

So Brandon, who spent most of the previous day smoking a brisket and then slept 2 hours at a rest area, is in the front of the boat as we drift through thick morning fog. He has a bad habit of fishing behind or to the side of the boat, a habit I try to cure him of by fishing around him to the front whenever I get the chance. It is very cold, Brandon has no thermal layers to wear, and as a result he is cold and surly. I’m enjoying his surliness.

FR- We're doing a  streamer float Saturday on the Manistee.  Want in? It's about 2.5-3 hrs from Sfield.

BR: (aka Brandon Robinson and OneBugIsFake) Yeah I think so.

FR: It will be streamers for big browns.  Float all day. Let me know if you're staying with me or driving up that am. Probably on the water by 9.

FR: Just your gas n food. It's not a guide trip.

BR: What do I need to bring? Wet wading? I don't have my Diablo yet.

FR: You'll need your streamer rod n streamers n waders. We will be in a 3 man drift boat but you'll want your waders. Dress warm.

BR: I think I'm in. Be warned I've never rowed a boat before.

FR: You won't have to. Koz and I are both experienced rowers.

BR: Yeah, I'll just buy some stuff off you. All my tying stuff is boxed up.

FR: Don't worry about it.  Between Koz and I we'll have you covered.

BR: I have some streamers. I should be somewhat okay.

FR: Other than that just make sure you have some wicking long underwear, fleece, or whatever you prefer to keep you warm.

BR: As long as I'm not wet wading I should be fine.

FR: Waders will mostly help keep the wind out. Most of the water is too deep to wade.

FR: It should be a good trip. It's primetime, conditions are perfect. Real shot at fish 20-28".

FR: They are the goal. Not always the reality. Those fish are there.

You can keep up with Brandon at OneBugIsFake.com and Koz at True North Trout.
Posted by Fontinalis Rising at 7:02 PM 8 comments: