It all seems like such a blur now. I don't keep a journal, so all I can do is look at my year in photos and say "Oh wow, I forgot about THAT." It's amazing how quickly a year seems to fly by, yet we manage to pack so much into it. Before I get too far into this, Troutrageous! laid out the ground rules for these kind of posts, so I'm going to go check the regs and come back.

Okay, according to him the first rule is:

1. No lengthy videos or photo slideshows of all of the fish you caught. In keeping with this I'll only be sharing a handful of pictures scattered throughout this post. This shot below is one of my favorites, of Alex Cerveniak casting on a remote brook trout stream on a foggy morning in late summer. We didn't catch a lot of fish, but it was a great day spent on the water with a good friend and the lighting and detail are perfect. I met Alex in March and he has quickly become on of my favorite companions on the water, especially if I want to do an all day remote bushwhack in search of some lost grail. 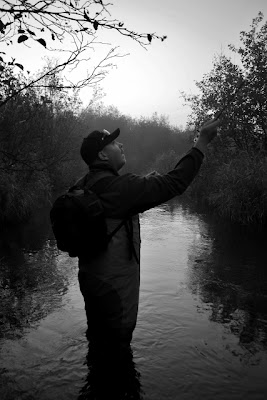 This leads us to Troutrageous! rule #2 (also known as taking a #2)

2. Don't write too much. I blew off a dinner invitation from Tom Hazleton in order to interview April Vokey. Tom is such a good guy, that not only did he forgive me this slight, we have gone on to become great friends. Being that Tom is a customer service rep for Scientific Anglers and I'm a fly fishing blogger it could be easy to assume I have ulterior motives. My answer to such assumptions is a resounding "No!" Tom is the real deal- he grew up in northern Minnesota fishing the same kind of small backcountry brook trout streams that I did. Among our trips we went camping, night fished while listening to elk bugle, got turned around in the backcountry traveling from stream to stream, caught smallies and carp on the flats, and waded down a fast moving stream by moonlight to swing streamers for king salmon. Tom recently got married to his long-time sweetheart, but I sense we still have many adventures ahead of us. The photo below is of Tom out on the vast carp flats on what was a memorable weekend of camping, catching big browns at night during the Hex hatch, and stalking bronzebacks and carp in the afternoon. Easily the best weekend of summer.

T! rule #3. No lamenting over your blog's future... Okay, I've already done this elsewhere, but I will state some new rules. No more posting just to post- either I mean it and feel it or it doesn't happen. This means that Monday Morning Coffee will continue to fade away. If it has been an interesting week and I have several unrelated items worth sharing then maybe, but don't look for it each Monday (I'm sure you aren't since I've let it slide for several months now). Also- No giveaways or other gimmicks to drive traffic. My blog revolves around my writing and photography. If that doesn't cut the mustard I'm not going to bribe you with freebies. Not saying I'll never do giveaways but I think you get the picture.


T! rule #4. Insert a stupid pop culture reference in your post, even if it makes no sense. This was the year that Brandon Robinson (onebugisfake.com) moved to Michigan. Brandon's Facebook post is the reason I woke myself up with coffee and Gangnam Style all those mornings this year. Curses Mr. Robinson. Rather than share some photo or video of Psy I believe this shot of Brandon riding a pink flamingo in someone's front yard says so much more. Giddy up! 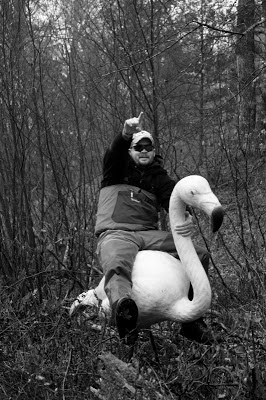 T! rule #5. Five is the magic number. All right Mr. 'Rageous! you get your wish. Here are my top five fishing trips this year in no particular order.

1. Fishing the Pere Marquette river in March with Alex Cerveniak. We drove several hours through the worst snow storm of the year. We didn't catch fish, but took some great photos. We stopped at BBT in Baldwin and bought copies of the new Drake issue with his work in it (how often does that happen?). It was the start of a great friendship.

2. Camping and fishing the trico hatch (which didn't happen) with Mike Schmidt of Angler's Choice flies. Mike is a great guy to share a campfire or a river with. We were especially proud of this trophy log he caught on a 0 weight- it took both of us to land it. You don't get many moments like these on the river. 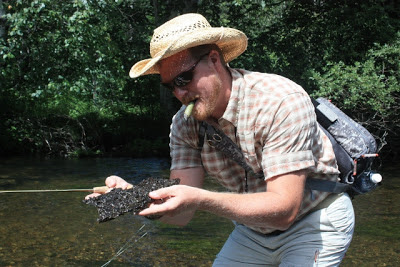 3. Fishing for brook trout with Alex Cerveniak and Jim Stuard. Alex mocked me for my choice of location, and the fishing was slow but the photo below is of Alex hooked on a twenty inch brook trout right before it broke him off. 'nuff said. 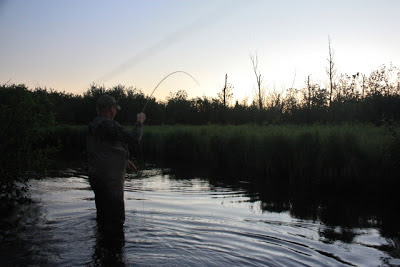 4. Camping and fishing with Tom Hazleton in June. I've already mentioned it above, but it was a fish bum weekend that I will long remember.

5. My solo trip to the UP on July 4 after brook trout. You can read about here on MidCurrent.com if you haven't already. It was an epic trip- 3 streams, withering heat, beautiful fish, and a personal pilgrimage.

Beaver Island in June ranks up there as well, but I had some tough choices to make.

This finally brings me to Fish of the Year: 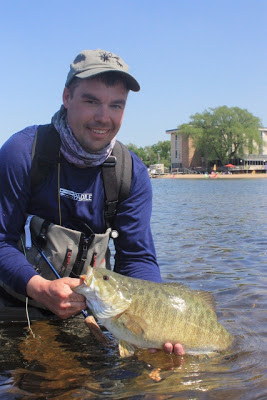 This was one of two 5 pound smallmouth I caught on Grand Traverse Bay in the spring. They were equally memorable but I had to pick one. Smallmouth in general were the fish of the year- I fished for them a lot, caught well over 100 of them and they vastly expanded and changed how I look at fly fishing. I've already started tying for next spring.

I especially want to thank all the good people (besides the ones mentioned) I shared the water with this year- Jeff Kennedy, Ethan Smith, Becca Schlaff, Ethan Winchester, Don Mapes, Zach Ginop, Tom Menas, Steve Martinez, Brian Kozminski, and Greg Walz. You all were a pleasure to fish with, and it made the season that much more rewarding and interesting. If I left anyone out I apologize.

According to the Jealousy Counter (top right on this blog) I fished 95 times this year. Will I beat that in 2013? Who knows and who cares. I still live in Northern Michigan, there are still many miles of stream and dozens of lakes I've never fished yet. Au revoir 2012 and welcome 2013. I wish you all the best and tight lines.
Posted by Fontinalis Rising at 8:41 AM