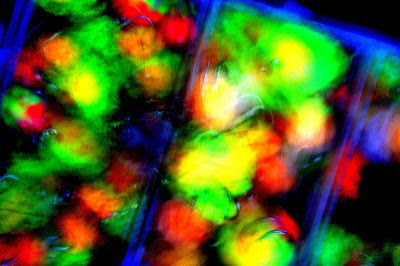 I'm driving home, post-fishing. It’s dark, and the fog is thick. I have some psychedelic music playing on the radio, Olivia Tremor Control. The music ebbs and flows with strange rhythms and harmonies, the kind of music you would expect the Northern Lights to sound like if you were on 'shrooms. Bigfoot or a Yeti could cross the road at any moment. I wouldn’t be too surprised if I ran over the Mad Hatter tonight.

Fly fishing is my LSD. The river is a shape shifter, and fish appear and disappear like so many apparitions. Sometimes they wind up inexplicably in your hand, all vibrant colors and breathing vivid spots, other times they are just a shadow, a swirl in liquid silver, a tail or a fin that appears for an instant before disappearing, a mere figment of a fevered imagination. 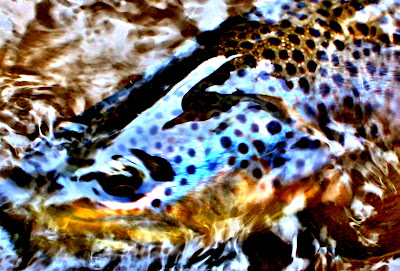 I can say that with confidence, and who could prove me wrong? It was my vision, not yours.

I’m standing thigh deep in the cold swirling waters and cold swirling fog while cold swirling clouds pass overhead, and white swirling snow birds perform their own living blizzard in the fields. What month is this? My mind tells me it’s December, but the temperature feels more like April. The drumming of a grouse nearby settles it- It must be April. How many times have I been here? I don’t know. When was the last time I caught a fish? How many times have I tied this knot? How many times have I tied this fly? It all runs together in a house-of-mirrors mind trick, until even the faces of my friends run together, like a fire has broken out at Madame Tussaud’s. Was I with Phil or Bill the last time I floated the Pigeon? Was it ’04 or ’05 when I last fished the Harmony river? Have I been to Alaska? Because it seems pretty real.

But it is not real. I’ve never been there. I know this. I’ll just have to keep reminding myself of that fact, despite my memories of fishing the dog salmon run on a braided gravel flat.

I open my kaleidoscope fly box, searching for just the right bit of fluff, the one mote of yarn that will entice a steelhead, a fantastic creature in itself that you couldn’t make up if you tried. “What? There’s a fish that can live in a stream like a normal trout, or if it chooses it can head down to a bigger body of water and return years later in the form of an angry silver freight train? What are you ON?”

I’m flogging the water pretty hard. Missed the first fish. Then another. I get another of those disjointed moments when I hook up on a fish while trying to cross the river with my line trailing. Two head shakes and it’s gone. I’m going to have to give up fly fishing- it’s messing with my head.

Childrens voices echo in the fog. I can’t make out what they are saying. Sometimes they sound happy sometimes they sound sad, irritable, plaintive, whiny. I used to have a repetitive dream that was very similar, but the voices were adult voices, and they were always angry.

I make my way upstream, fishing the familiar lies, but they have all changed. I’m of the opinion that salmon have at least as big of an impact on a river as beavers- none of the holes are as they were last year, some are missing entirely. It’s like fishing a different river. I have to learn each run and hole anew. It's disorienting- the river looks the same, but something fundamental has changed. I miss several more fish before finally hooking up on a brown trout. It’s a small fish, but it’s colors are shocking and vibrant against the muted tones of the river in December, another hallucination in a monochrome world. Two runs up I miss a fish on the first cast, but as my rig drifts past me a spectral form materializes off the dark bottom and turns in a swirl. I pause a second before setting the hook;  it’s no surprise when a foot-long rainbow comes to hand.

I saw this coming before it ever happened;  I have willed this fish into existence through an act of lucidity.

I caught two more fish before the failing light blended all the shapes and colors back together, and the only reality left was the trail out, then the headlights of my car on the road. The world came to an end by the simple cataclysmic act of the sun setting.

I head home to heat up my dinner and wait for the world to reappear miraculously tomorrow. I’ve never been into drugs. For me the river will have to do.

Posted by Fontinalis Rising at 5:09 PM