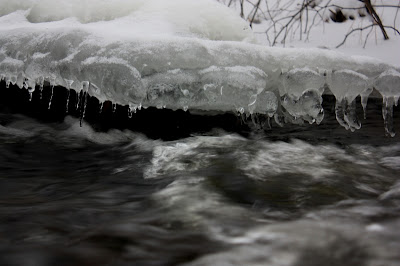 I went fishing today, my first outing of the year, numero uno. According to the Jealousy Counter (now re-set) I fished 95 times last year. I went today for the usual reasons- I needed to get out of the house, I needed some air, I needed a horizon. I wanted to catch a fish. There were plenty of reasons not to go. There's always more house- and paperwork to do, I have articles to finish, emails to answer, research to do, dinner won't cook itself; or the fear that the cold and damp will blanch my features until I am another faceless dot in the pointillist human landscape.

You can always tell how my winter fishing trips went by the pictures I take- if it went well there will be pictures of fish. If I'm taking pictures of cool ice formations the fishing stunk. Today I took pictures of ice. I'm really not sure why I do this. Perhaps its the notion that if the river isn't going to give me fish than I am going to take something- I can't go home empty handed. Trophy icicle anyone? Sure, ice can be beautiful. It can also be dull, gray, a cold reminder, the epitome of the harshness of the season.

The water was low, the biggest pool on this stretch of river was nearly iced over, leaving me only pocket water to fish. This isn't really a river; it is more of a creek. When the water is up you can fish it out in a couple of hours time, and it's never worth fishing two days in a row- if you had a good day those fish are on to you, you're better off resting them. I fish this creek for the same reasons I fish a lot of my spots- no one lives here year-round, and very few people fish here at all. Sure, there's a handful of local geezers who dunk spawn at the lamprey weir, but it's rare to see them mid-winter. It hosts just enough fish to keep me coming back, but not enough that anyone would drive an hour to get there. Usually it's just me and the eagles. Last time I was there I saw two immature bald eagles winging slowly by. You can always tell the immature ones- they laugh at fart jokes.

So, the fishing was unspectacular, the skies were gray and I was shunned by fish and eagles alike, but I am on the board. 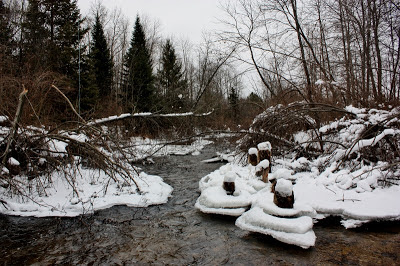 Posted by Fontinalis Rising at 11:53 AM 8 comments: