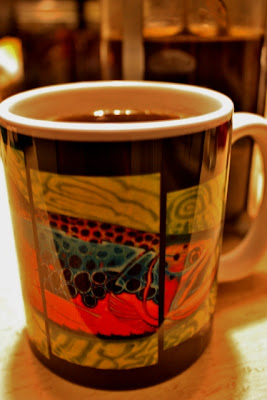 Uuuuurrrrrggggghhhhhh. . . . auph! Yawn, stretch, scratch, repeat. Is it Monday already? Durn. Time to put on some coffee I guess.

Well, the story this last week was the three day storm and lake effect blow we had that dumped 20 more inches of snow and made life feel like an episode from Ice Road Truckers. This winter has been tenaciously hanging on, and all I can do is repeat what I've said before about it being good for the rivers, orchards and morels. We usually have some snow left at this time, but this year we pretty much have 100% of our snow pack going into April, which should make for a pretty interesting spring run-off.

The good news is that the steelhead are in the rivers if you're willing to make some tracks in the snow. The run is still building, but so is pressure, and the next week could be the best fishing of the year, but the opportunity to have the river to yourself is pretty much gone. Spring fever and warming temperatures are starting to drive fishermen outdoors, and the failing ice will be driving them off of the lakes soon. I got out yesterday with my friend Tom Menas again. I got blanked on an early hook-up, and Tom hooked up on a decent fish a little while later. There were a lot of tracks in the snow, and I think the elbows are just going to get sharper over the next few weeks.


What else? I've been working on improving my tying lately. I cranked out a bunch of conehead Madonnas last week in order to work on my deer hair spinning and proportion techniques. They're a very effective streamer that is super simple to tie, meaning that I can repeatedly spin and shave hair. I'm not there yet, but better. Zach Ginop showed me how to hold my razor in place and rotate the vise. It gives a much more consistent shave than I can do by hand. I still can't get the collars uniform, and some of the heads are monstrous, but the fun thing about tying for myself is I know they don't have to be perfect to catch fish. It's a brown trout's mission in life to eat all the freaks and deformed and crippled fish, so I figure my bad tying only ups my odds of success. I pity guys like Mike Schmidt, Dave Hosler and Matt Erny who can tie such perfect baitfish imitations and have them be consistent tie after tie. Brown trout look at those perfect flies and pass instinctively on such healthy and fit specimens. When they see my odd colored, big-headed lurching critters spinning through the water like a propeller blade they not only know that it's an easy meal, but that it's their job to do the right thing and put it out of its misery- The Law of the Jungle. It's for this very reason that I have no intention of improving my tying too rapidly. What's to look forward to this week? Rumor has it that Brandon Robinson (OneBugIsFake) will be making his way north for a little fishing and kayak sledding on the weekend. Whether this leads to fish or to the intensive care unit remains to be seen.

Well, I'm almost finished with my coffee and it's time to go to work. Have a great week!

Let's get after it.
Posted by Fontinalis Rising at 3:11 AM