Season of the Hex 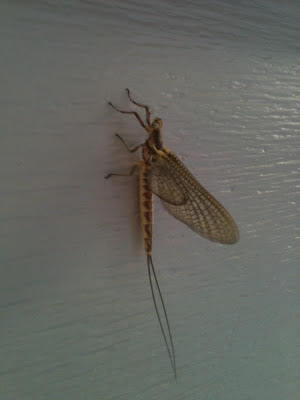 It's late June, and in Northern Michigan that can mean only one thing- the Hex are upon us. Tonight I will have fished 7 of the last 8 nights. On Sunday night I got off the river so late that I could only drive home, take a shower, make some coffee and go to work. Needless to say it was a terrible day.

The fishing has been fantastic.


The Hex hatch is an annual event anticipated by Michigan anglers for good reason- it's a big bug that attracts big fish. Fish over twenty inches are common. Lifetime fish are caught at this time of year. Fish that would never rise to lesser flies move out into shallow water and feed with abandon. It is the steroidal essence of fly fishing.

There is some alchemy to this hatch. They don't just show up on time and tap their watches. They generally start after June 15, though you'll see some early bugs on the lakes. They also start on the local lakes about ten days before they do on the river, so if they started on Crooked Lake June tenth it should be good on the river on the 20th. If there's a chill in the air don't go. You need calm, warm, humid evenings. If a dry front blows through and drops the humidity, don't go. Ideally? 82 degrees by day and humid, with storms building in from the west, but still, calm winds. Dark of the moon is best.

Hex generally do not hatch or spinner fall until dusk. If you've picked the right evening look out- as soon as the light fades big bugs will flit in and out of your consciousness, and the air will thrum to the sound of a thousand wings. Fish will come out of the woodwork, fish you never knew existed in your river, fish that will give you nightmares. The fish of your dreams.

We've been dealing with the Super Moon here during our Hex hatch which has made fishing tough. I have not once witnessed that all out melee of every fish in the river making the water boil, but the fish that have been feeding are epic, the biggest in the river. The flip side is that the fish are super selective, and if you park your drift boat too close or make a bad cast and line them you'll put them down instantly.

The hatch this year has been epic, and yet so far the fish are good but not exceptional. I've caught four fish in the 18 inch range but none over 20". Last year I only fished the Hex hatch once, but my one fish was 24.5 inches.

We're having a normal year this year, meaning that everyone thinks the hatch is late. Historically the hatch should just be starting. As a kid I fished the Hex all the way into August. It was a solid July hatch. That seemed to end after the record drought of 1988. I think we lost some biodiversity then. Regardless, the Hex hatch is a great time of year, your one chance to catch a giant brown trout on a bonafide dry fly.

I'm headed out to catch mine.
Posted by Fontinalis Rising at 4:21 PM